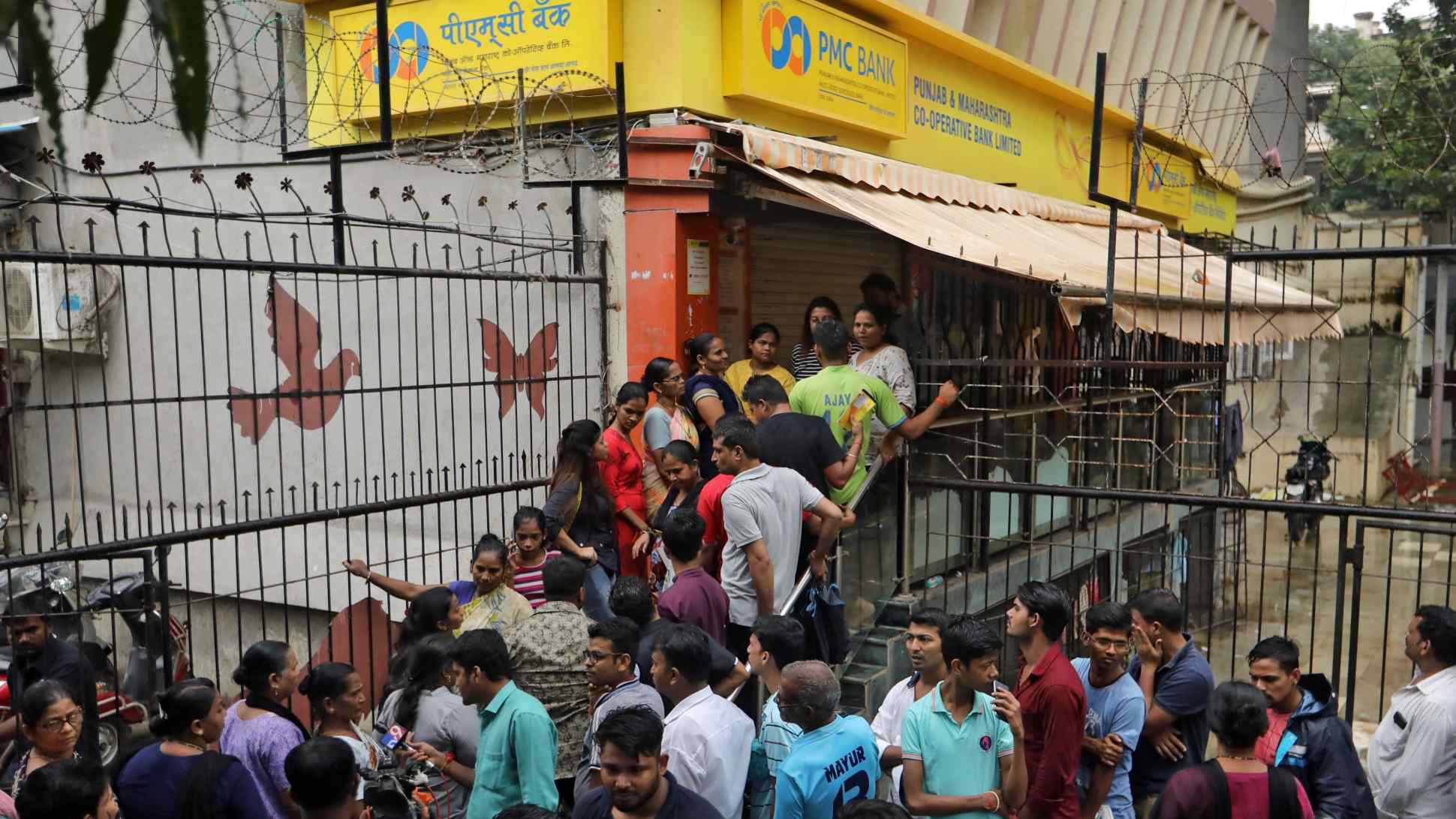 PMC Bank customers rush to withdraw money from a branch in Mumbai in September. In a decade of alleged deception, the bank's exposure to a single housing developer reached 70% of total assets.   © Reuters
Industry in focus

MUMBAI -- Adel Divine Court was supposed to be a manifestation of the Indian Dream -- a posh, gated high-rise complex of about 1,000 apartments in the New Delhi suburb of Faridabad.

Instead, the development has become a nightmare. Eight years after the residences were put up for sale, the project remains uncompleted, with some buyers demanding refunds while others fight to have the construction finished.

This is not an isolated case. Stalled construction has become a problem of epidemic proportions in India's urban property markets. Well over half a million housing units are in limbo as builders run low on cash and bad debts ripple through the country's financial sector.

For Prime Minister Narendra Modi's government, the race is on to address growing real estate risks that have snowballed into a rise in nonperforming loans, allegations of fraud, failed real estate lenders, and a credit crunch in the overall banking sector that has darkened the country's economic prospects.

Growth figures are due out on Friday for the second quarter and most economists expect a slowdown from the 5% expansion in the first quarter. India's economy grew 7.4% last year.

The Faridabad project illustrates the mess Modi is having to untangle. When the developer, Adel Landmarks, started selling the apartments in 2011, it offered 30% to 60% discounts to anyone willing to pay 50% to 100% upfront. Buyers who jumped on the deep discounts were promised they would get their keys within three years. As of September, projects worth a combined 4.6 trillion rupees in seven major metropolitan areas were stalled or "chronically delayed," according to one study.   © Reuters

Customers fought with Adel for years before financial creditors finally decided to take the builder to the National Company Law Tribunal, the country's bankruptcy court system, in December 2018. The complainants believed the developer had been siphoning the advance payments to acquire new land, while borrowing from bank and nonbank lenders to try to keep construction going -- only to completely run out of money that fall.

In August, the tribunal bench handling the case compiled a list of creditors. It turned out to include about 5,000 homebuyers who had paid Adel advances totaling 18 billion rupees ($250 million) for a dozen projects. Claims by other creditors, financial and operational, totaled about 23 billion rupees.

Missing were buyers who were unwilling to accept losing a big chunk of their payments. One government employee who paid 2 million rupees for a three-bedroom Divine Court flat said he had been advised that the insolvency process would bring no more than 30% refunds. He joined a buyers' association demanding completion. "It is better to get my flat completed, no matter how long it takes, than lose 70% of the money for nothing," he said.

One of the largest financial creditors on the list, meanwhile, was IL&FS Financial Services, part of the Infrastructure Loans & Financial Services group, a major nonbank lender whose bankruptcy in fall 2018 triggered the credit crunch in the first place.

Mutual funds exposed to IL&FS debt faced a run by investors, which spread to funds with exposure to nonbank lenders in general. This stopped the funds from rolling over debt security positions to real estate developers. Cash-starved developers asked financiers for moratoriums and put projects on hold.

Banks did expand the supply of liquidity to nonbank lenders, but it was not nearly enough. State-owned banks, in particular, had little room to increase higher-risk credit to nonbanks, as most of them were still ailing with persistently high ratios of nonperforming assets.

The result? A lot of quiet construction sites. As of the end of September, work on 575,000 housing units in roughly 1,600 projects was stalled or "chronically delayed," according to a study by Anarock Property Consultants covering seven large metropolitan areas. The major real estate consultancy found the affected projects were worth a combined 4.6 trillion rupees.

In early November, the Modi government announced it was setting aside a 250 billion rupee fund to revive delayed residential construction across the country. But that amount is less than 10% of the stuck projects in just seven cities.

"The direct cause for most of those stalls and delays is a lack of liquidity or financial troubles in the ongoing credit crunch," said Ashutosh Limaye, head of Anarock's strategic advisory and valuations division.

The credit crunch hit at a particularly sensitive time for residential developers, which were adjusting to the first comprehensive regulation of their industry in Indian history: the Real Estate (Development and Regulation) Act fully implemented in May 2017, known as RERA.

Before RERA took effect, there were no rules on using money collected in advance. "It was quite common for developers to use money collected in one project for other projects or for personal spending," Limaye said. In other words, companies freely did what the creditors accused Adel of doing.

RERA, however, required developers to keep all the advance payments for a specific project in a dedicated bank account with third-party oversight. This applied to existing projects, too, barring very small ones.

Developers rushed to borrow money and keep existing projects alive. This meant that a rule designed to reduce risk arguably created more of it, at least in the short term.

"In that transitional period, many nonbank financiers were very charitable, lending a lot of money to those poorly run developers without serious due diligence," said S. Sriniwasan, managing director of Kotak Investment Advisors.

When the credit squeeze took hold, the nonbank lenders -- largely funded by banks -- became incapable of rolling over their loans to real estate developers, let alone extending new ones. So the nonbanks' nonperforming assets increased.

Sriniwasan argued that "very poor lending practices [with poor due diligence] by the lenders should bear half the blame" for nonperforming assets involving residential developers, alongside the developers' own imprudent habits. 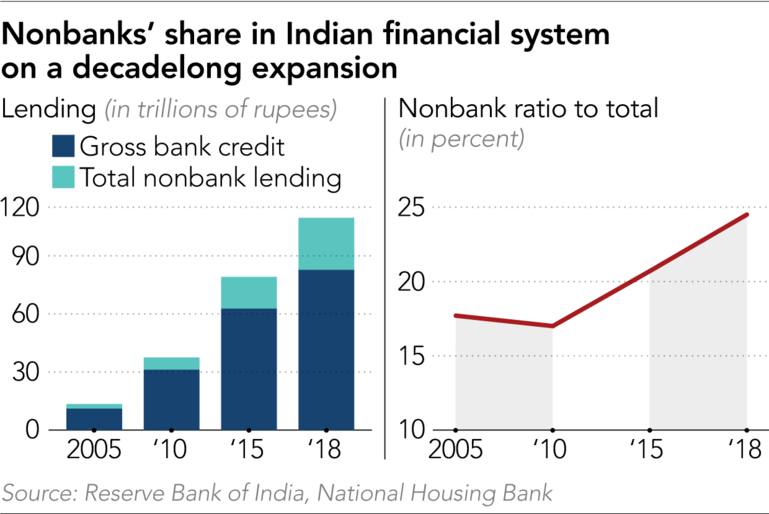 Despite the government's efforts, life is only getting harder for the lenders.

Major nonbank mortgage provider Dewan Housing Finance started defaulting on debt securities in June, after lending too much to homebuilders. The Reserve Bank of India, the central bank, took over Dewan's management on Nov. 20 to send it to the National Company Law Tribunal -- designated by the government as the place to process nonbank lenders' insolvencies.

In September, the bank's dire balance sheet prompted the RBI to abruptly cap depositors' withdrawals at 1,000 rupees, or about $14. Later it came to light that the bank had concealed its true books from the central bank for over 10 years while secretly increasing its exposure to HDIL to more than 70% of total assets. The loans to HDIL became completely nonperforming around 2016.

Executives at both HDIL and PMC Bank have been arrested on fraud charges.

Major banks' nonperforming asset ratios dropped during the fiscal year ended in March but stayed flat during the six months through September. Excluding giant State Bank of India, the majority of state-owned banks saw their ratios deteriorate in the half-year period. Now, many are watching the real estate sector's debt with a sense of foreboding.

Outstanding loans by banks and nonbank lenders to the sector were estimated at 6 trillion rupees as of March, according to India Ratings and Research, Fitch's India unit. Nonbank lenders accounted for 1 trillion rupees, and Pankaj Naik, associate director at the ratings agency, estimates 70% of their loans will reach repayment deadlines from January 2020 onward.

The strain is showing in the overall economy.

The residential real estate turmoil and the broader credit crunch appear to be undermining middle-class purchasing power. The average Indian household keeps 77% of its total assets in property, 11% in gold and only 5% in financial products, according to a study published in 2017 by the Household Finance Committee, an ad hoc government panel. For such households, a new apartment can be a source of lease revenue or an addition to home equity -- the basis for creditworthiness for borrowing.

This kind of leveraged demand growth has kept the economy going, but the credit constraints are taking a toll. A historic slump in auto sales is believed to reflect reduced access to nonbank auto loans, weaker household incomes and damaged family balance sheets.

Market watchers await the government's July-September gross domestic product announcement on Friday with trepidation. Many bank economists have lowered their GDP growth estimates for the quarter through September to below 5%, and cut their projections for the year through March to below 6%.

In early November, Nomura slashed its growth estimate for the September quarter to 4.2% from 5.6%, and its full-year figure to 4.9% from 6.0%. The brokerage cited what it calls the "triple balance sheet problem" as a major factor in the slowdown. This is an extension of the "twin balance sheet problem" posed by shaky bank and corporate finances, adding weak nonbank lenders to the equation.

Ashoka Mody, a visiting professor at Princeton University, last week warned that the current slowdown is "not a short-term disruption."

On the contrary, Mody said, "a financial bubble that began inflating nearly three decades ago is finally fizzling out." If that is the case, the triple threat is not going away anytime soon.