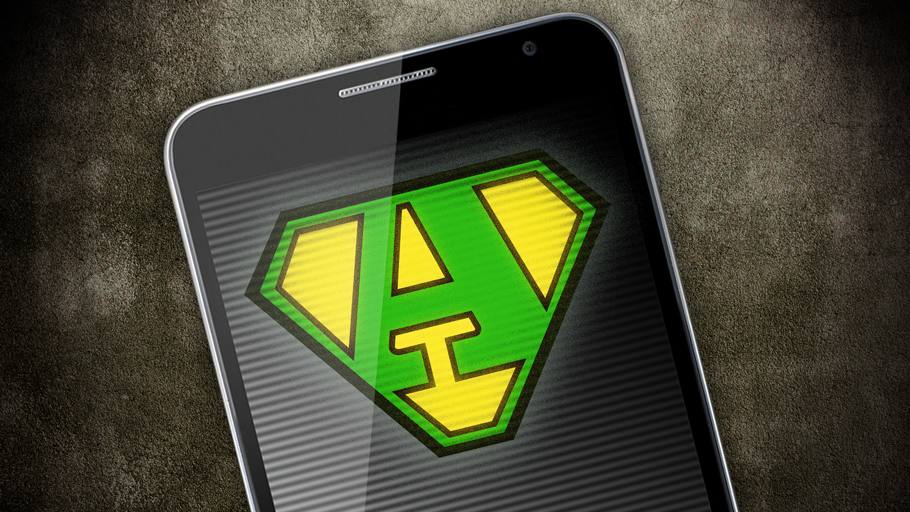 Super apps: WeChat, Go-Jek and rivals battle to do it all in Asia

HONG KONG -- Michael Xu was spellbound. Soon after visiting relatives in China in 2017, the game developer from Toronto decided to fly halfway around the world -- again -- to learn how to build games for the Chinese app WeChat.

"WeChat is huge in China," Xu told the Nikkei Asian Review during an interview conducted through, well, WeChat. The 28-year-old Chinese Canadian was impressed by the way his relatives used the same software to do everything from paying bills and chatting with friends to ordering food. "Even my 88-year-old grandfather is a master user of WeChat," he said. "He uses it to call me and share photos and articles all the time."

So when Xu resolved to tap into the Chinese video game market last year, his first move was to take a WeChat programming course in Shanghai. "All the people in China are already on WeChat," Xu said. "It's much easier to get them to play our games on WeChat, instead of asking users to download another app."

Xu's strategy illustrates the sheer power of WeChat, which is run by internet giant Tencent Holdings and counts more than 1.1 billion users, mostly in China. Imagine if the U.S. apps WhatsApp, Apple Pay, Uber, Facebook, Expedia and a host of others were all rolled into one -- that's WeChat. And its success has inspired companies across Asia to build do-it-all apps of their own, sparking a regional "super app" phenomenon.

Convenience, however, may come at a price, with some experts warning that the rise of these apps hampers online competition and innovation.

Although no one has counted the exact number of super apps in Asia, they are sprouting up everywhere, including some of the region's remotest corners. Myanmar, which only gained internet access in 2000, has embraced a Vietnam-developed app called Zalo, which started as a messaging tool and will soon allow shopping and e-payments. In India, conglomerate Reliance announced earlier this year that it would introduce an app with 100 built-in services. 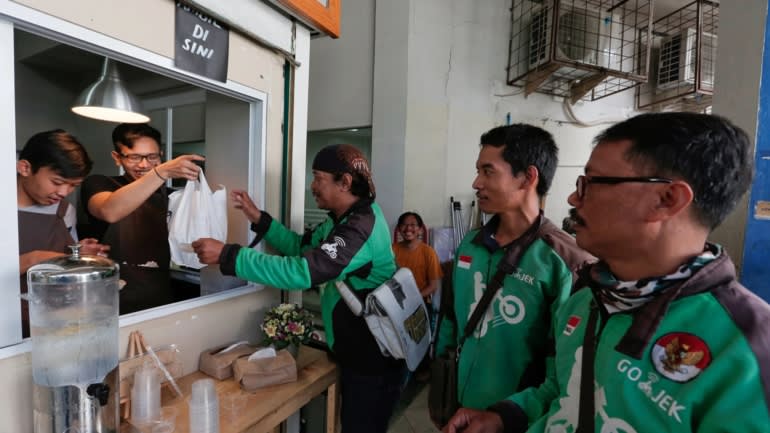 Go-Jek drivers wait for orders at a coffee stall in Jakarta: The app has become much more than a ride hailer.   © Reuters

The phenomenon can be traced to the development of emerging economies that picked up just as smartphones were catching on. Millions of people in Asia's emerging markets missed the personal computer era but have leapfrogged straight to smartphones, and using apps is second nature to them.

At the same time, the multibillion-dollar app market has attracted fierce competition. In China alone, there are more than 4 million apps and counting, according to the Ministry of Industry and Information Technology. Analysts say that for companies, super apps help draw in users amid a sea of software -- and lock them in.

Amalia Ayuningtyas, a consultant in Jakarta, is living proof that this tactic works. She initially downloaded Go-Jek, Indonesian's super app, for its main motorcycle taxi service. She just wanted to get through the city's rush-hour traffic faster, but the 27-year-old soon found herself trying the app's other features, enticed by Go-Jek's vouchers.

Now, Ayuningtyas uses the mobile wallet GoPay to pay for rides, orders meals on GoFood and sends documents by GoSend. Occasionally, she books a masseuse via GoMassage and arranges for housekeeping through GoClean. Whenever her phone's credit balance is running low, she tops it up using GoPulsa.

"I'm a Go-Jek native," Ayuningtyas said, adding that almost 20% of her monthly spending is through the app.

Ajey Gore, Go-Jek's chief technology officer, told a recent conference in Hong Kong that his platform is handling 2.5 million user requests at any given time, thanks to its still-growing range of 21 services. "Once you have this [scale], you can do anything," Gore said.

Selling various services on one platform limits costs, making it difficult for competitors to stay in the game. Foodpanda, a major food delivery company based in Germany, shut down its Indonesia operation in 2016 after Go-Jek and Singapore-based archrival Grab expanded into mobile meal ordering. 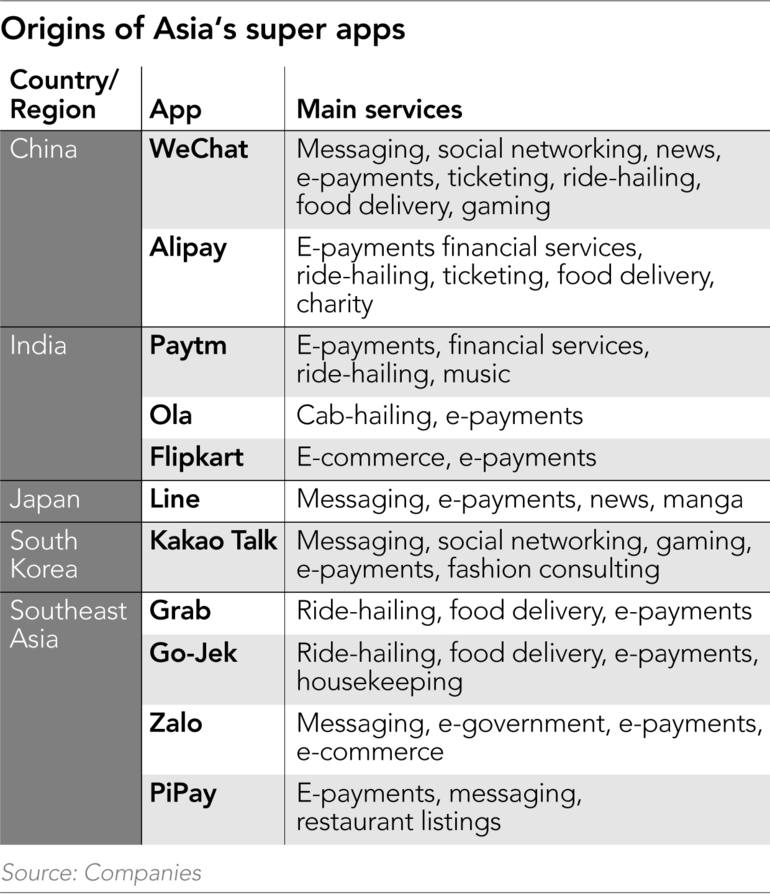 Earlier this year, Singapore-based Honestbee also decided to halt food deliveries during a strategic review. Honestbee was reportedly looking to sell its operations to Grab or Go-Jek, though the company declined to comment.

Investors are taking note. "The joke among Chinese venture capitalists is that if it is a customer-facing app used in the 4G setting, it's probably not worth our attention," said one investor with a major early-stage venture capital firm in Beijing.

"They won't be able to survive in the competition with WeChat and Alipay anyway," the investor said, referring to Tencent's offering and the mobile payment-oriented super app created by Chinese e-tailer Alibaba Group Holding. "The giants are already very powerful with control over the entrance of many fields, and they are becoming more and more powerful."

Consumers, often, are all but forced to use some super apps, like it or not. In Hangzhou, the birthplace of Alipay, a number of restaurants, coffee shops and supermarkets only accept the e-payment service. Similarly, few people bring stacks of business cards to conferences in China -- they simply add each other on WeChat.

With two out of three Chinese on WeChat, the app "is so ubiquitous" that it has essentially become a "public utility," said Matthew Brennan, managing director of Shanghai-based tech consultancy China Channel, who specializes in WeChat-based marketing.

"It is like your phone number, water, gas and electricity," Brennan said.

As popular as it is now, WeChat is still in expansion mode. Tencent has made companies and developers an offer that is hard to refuse: They can build a mini-app for WeChat cheaper and faster than a conventional app.

"It usually takes a week to build a [regular] app with a full team," said Dounan Hu, director of Shanghai programming school Le Wagon, which teaches developers to build within WeChat. "But with the mini-program, just one or two people can do it in a day."

Piggybacking on existing features like payments and messaging makes the process a lot easier, Hu said. 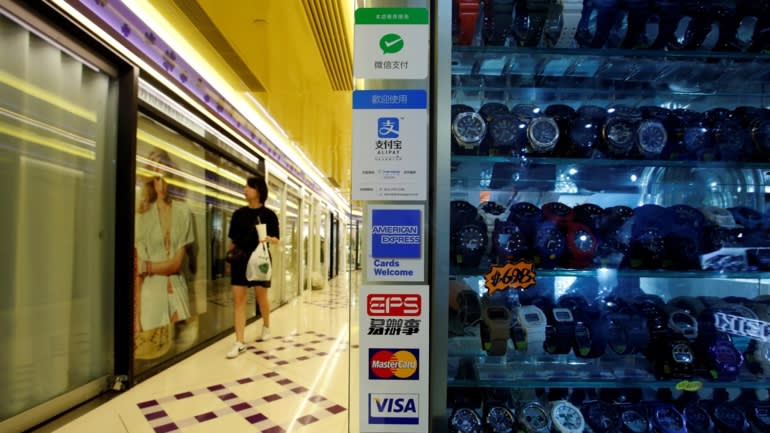 Labels for WeChat Pay, Alipay and other services are displayed outside a watch store in Hong Kong.   © Reuters

Tencent founder Pony Ma said last November that more than 1 million mini-apps had been deployed on WeChat since 2017, when the company started allowing them. Alipay, which introduced its own mini-app platform last year, said it attracted more than 100,000 in the first four months, adding almost 850 a day.

Jeffrey Towson, a professor of investment at Peking University in Beijing, likened super apps to valuable real estate. "Everyone has to go through them," he said. "If you want to sell something, you can put an app on people's phones -- good luck with that. Or you can put a mini-app on WeChat. They are an effective doorway to your digital life."

The problem, some argue, is that they might just slam the door on everyone else. "The question is whether super apps would end competition just like what we see a lot of other companies have done," said Jason Davis, an associate professor of entrepreneurship at Insead business school in Singapore.

For now, developers and analysts say Tencent and Alibaba remain disciplined about wielding their power. Both generally allow anyone to be part of their mini-app ecosystems and charge "almost negligible" fees from the businesses. Yet there are some unspoken rules.

For instance, e-stores running on WeChat cannot accept payments via Alipay, and vice versa. In addition, mini-app operators are expected not to compete against the hosts. Last year, Tencent raised eyebrows by suspending direct playback of several short video apps -- including major competitor TikTok -- on WeChat.

Although Tencent attributed its decision to Beijing's crackdown on undesirable social media content, Zhang Yiming, who owns TikTok parent ByteDance, accused the company of finding an excuse to block the app. Tencent, in turn, accused Zhang of "defamation."

The alarm over anti-competitive practices is prompting pushback from industry insiders, who argue super apps cannot kill off rivals the same way traditional businesses do. "I wish it was that simple," said Hian Goh, co-founder of Singapore-based Openspace Ventures and a backer of Go-Jek.

Goh railed against the notion that the apps can choke competition like, say, a property tycoon who refuses to lease to a rival. "The possibility of creating competition and having distribution is much more open in the digital world than the physical world," Goh said. "I refuse the idea that just because those apps are dominant, innovation will be slaughtered. If anything, innovators will become even more aggressive."

Granted, Tencent's move does not seem to have hurt TikTok much. The short-video app in January surpassed Facebook and Instagram in terms of downloads, according to app tracker Sensor Tower. ByteDance, for its part, has topped WeWork, Airbnb and SpaceX to become the world's most valuable startup, at around $75 billion, according to market research firm CB Insights.

Meanwhile, companies that helped drive WeChat's rise are showing they are not necessarily wedded to it. Brennan, who is writing a book about the super app, said top Chinese ride hailer Didi Chuxing used to rely on WeChat to attract passengers. Now, he said Didi -- which is also backed by Tencent -- gets about 90% of its orders through its own app.

"They want direct access [to users]," Brennan said. "Otherwise, their business is at risk."

Xu, the video game maker from Canada, said he still plans to build his mini-games within WeChat. But he will have a backup plan, too.

"We will also have our gaming apps on the Apple Store, Google Play and many other platforms," he said. "WeChat is a great channel, but we shall not rely on it."