Latest On Industry in focus 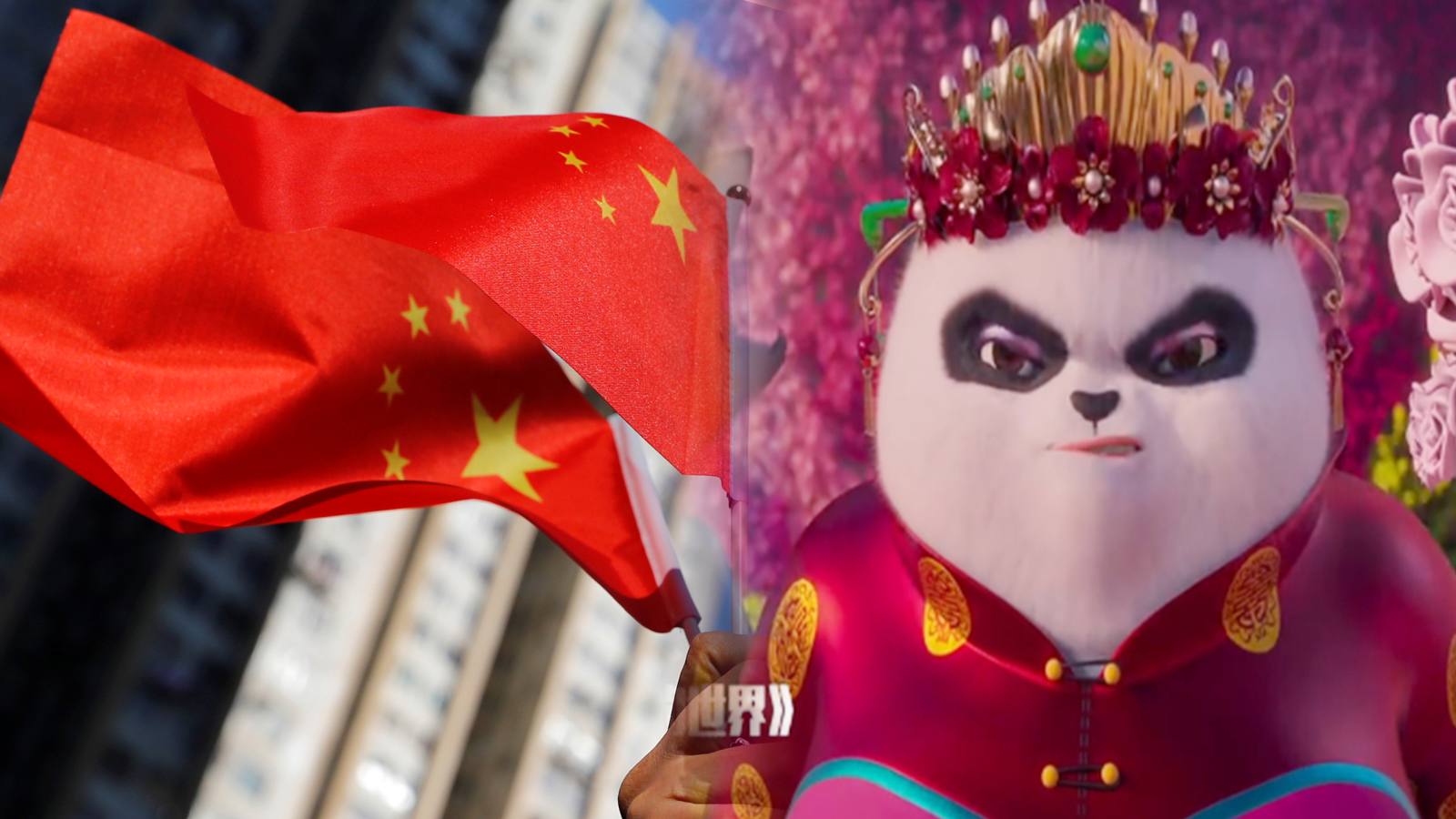 Blockbuster or bust: China's film industry is in a bind

Food delivery drivers dance with death for Alibaba and Tencent Over 85% expect to run out of cash within three months

"They couldn't make their way back," the Hong Kong businessman said. Most of his workers hail from central-western China, including 11 from Hubei Province, the epicenter of the coronavirus outbreak that has killed more than 2,000 people. Many said they had been banned from leaving their villages as authorities race to contain the epidemic.

Lau's business had already been hurt by the 25% tariff on aluminum products the U.S. imposed in its tit-for-tat trade war with China. Now he worries the production constraints will give American customers another reason to cancel orders and switch to Southeast Asian suppliers.

The virus is making a bad situation "worse," he said.

This same double blow is hitting small and midsize enterprises across China, prompting a growing chorus of calls for the government to step in and offer lifelines. The stakes could not be higher: These smaller employers account for 99.8% of registered companies in China and employ 79.4% of workers, according to the latest official statistics. They contribute more than 60% of gross domestic product and, for the government, more than 50% of tax revenue.

Companies like Lau's that have resumed some production are the lucky ones. Many factories and other businesses remain completely stalled due to the virus. Some owners can do little but pray that things return to normal before they careen off a financial cliff. Danny Lau's aluminum facade company has been slammed by the combination of the trade war and the coronavirus outbreak.

Eighty-five percent of 1,506 SMEs surveyed in early February expect to run out of cash within three months, according to a report by Tsinghua University and Peking University. One-third of the respondents said the outbreak is likely to cut into their full-year revenue by more than 50%.

"Most SMEs in China rely on operating revenue and they have fewer sources for funding" than large companies and state-owned enterprises, said Zhu Wuxiang, a professor at Tsinghua University's School of Economics and Management and a lead author of the report.

Employers need to pay landlords, workers, suppliers and creditors -- regardless of whether they can regain full production capacity anytime soon.

"The longer the epidemic lasts, the larger the cash gap drain will be," Zhu said, adding that companies affected by the trade war face a greater danger of bankruptcy because many are already heavily indebted. "Self-rescue will not be enough. The government will need to lend help."

As of Monday, only about 25% of people had returned to work in China's tier-one cities, according to an estimate by Japanese brokerage Nomura, based on data from China's Baidu. By the same time last year, 93% were back on the job.

Nomura's chief China economist, Lu Ting, suggested local governments around the country face a daunting question of whether to focus on staving off the virus or encourage factory reopenings. As long as the national logistics network "is still in shambles," Lu said, there might be little to gain from rushing restarts, whereas "the cost of a rebound in infections might be quite high." He expects economic activity to pick up again in a couple of months.

In the meantime, factory owner Richard Leung has found that switching production lines back on does not mean that they stay on. His plant in a village near Shenzhen makes women's bags for export. After reopening last week, he was forced to shut down again two days later. "The town government informed us that two [virus] cases were confirmed in a nearby town," Leung said. "They said it's not appropriate for our workers to come in and out of the area."

Leung suspended operations again until next Monday. Meanwhile, he has been covering accommodations and meals for about 100 workers who had already come back to the factory.

The 57-year-old said the impact of the coronavirus crisis is much worse than the SARS outbreak in 2002 and 2003. Back then, his production continued uninterrupted, despite the need for special health checks. This time he expects the production delays will cost his company 30% to 40% of its annual revenue.

"The government needs to help us," Leung said. "The costs are too high. We can't afford it."

Zhou Dewen, the chairman of the Small and Medium Business Development Association in the city of Wenzhou, agrees that this crisis is worse than SARS.

In fact, he said, it is "the most severe" of any crisis in the 40 years since China embarked on major economic reforms. He sees not a double but a "triple whammy," factoring in the economic slowdown the country was experiencing even before the trade conflict and the virus. 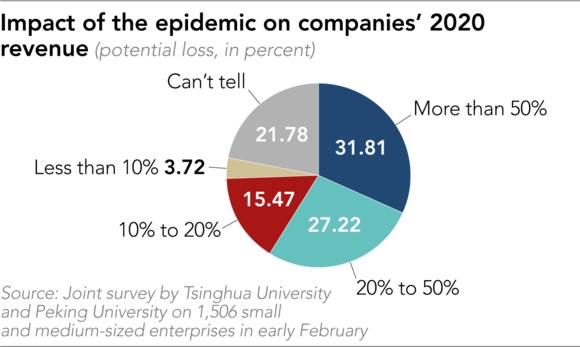 Wenzhou, on the coast of Zhejiang Province, was the first city outside Hubei put into full lockdown in an attempt to stop the pathogen. As of last week, Zhou said, only factories that produce medical supplies had been allowed to resume work.

"What entrepreneurs need is confidence," Zhou said. "But first they need to survive." He is hoping the government will offer fiscal support and tax breaks to buy more time for small businesses.

Some local governments have already responded to such pleas by waiving electric bills and delaying taxes, social security payments and loans.

But for some businesses, such relief measures are little consolation.

One strategy for limiting the spread of the virus is to prohibit large gatherings, lest the infection jump between mingling guests. In the eastern city of Hangzhou, the municipal government has essentially banned wedding banquets since mid-January. Wedding planner Zhu Yun had about 60 events lined up for February and March, but all of them had to be postponed.

Zhu reckons her company will lose about 3 million yuan in profit over the two months. Besides the postponements, couples that were looking at wedding options before the outbreak have put their planning on hold. There is little room, it seems, to think about love in the time of the coronavirus.

"This is the most difficult time I have ever experienced" after 11 years of running the company, Zhu said. The worst part might be the uncertainty: She has no idea when the authorities might lift the ban or whether she can make it that long.

"All of this is unknown to us," Zhu said.

While she aims to tough it out for now, others are steeling themselves to take drastic action.

"The first thing I would do after returning to work is to convince my employees to take a pay cut," said Huang Zhou, who founded an educational institute in Guangzhou.

Her company, which offers after-school courses, is struggling to maintain its payroll while regular schools are closed to fight the epidemic. Under normal circumstances, the institute would have restarted its courses on Feb. 3, but it remains in limbo. Huang and her six colleagues tried to move their operations online but "it did not work out well."

"Not all courses are suitable for e-learning," she said, "and some teachers also did not feel comfortable about livestreaming."

Huang said her cash flow is only enough to keep going for one more month. "I will have to cut my employees' salary by at least half. If they disagree, then I'll be left with no choice but to fire them."

Analysts are deeply concerned about the damage the virus may be about to do to nationwide employment. A looming wave of business failures threatens the lowest skilled and poorest Chinese workers more than anyone.

Wang Dan, a Beijing-based analyst with the Economist Intelligence Unit, estimates the outbreak could cost China about 4.5 million jobs in 2020, of which 75% will be at SMEs. This translates to a roughly 1-percentage-point rise in the unemployment rate, largely on the lower end of the skill spectrum. 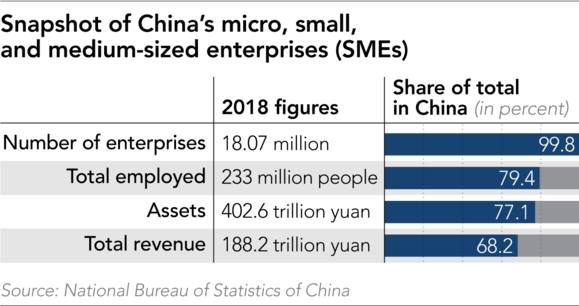 "A lot of small businesses that compete on price will be ousted," Wang predicted, pointing to restaurants, retailers and entertainment facilities. The local property market and local government tax revenue could also be affected.

This is certainly a tough time to be looking for a new job.

Wang Qiang, a 23-year-old migrant worker, has been unable to find work in Shenzhen after three weeks of searching. On top of the limited factory job openings, he faces another major obstacle: his identification labels him a native of Hubei.

His home province, where the virus originated, accounts for the vast majority of the 74,000-plus mainland infections and most of the deaths. "The labor dispatch companies told me that the factories don't want people from Hubei," he said. The fact that he did not go home for the Lunar New Year holidays seems to make no difference.

Wang spends his nights sleeping on the floor of an uncompleted building. "I'll wait and see if the situation gets better when companies restart work on Feb. 24."

Latest On Industry in focus