Uber sold its Indian food delivery operations to Zomato in an all-stock deal, in a rare example of homegrown companies defeating foreign rivals. Or was it?   © AFP/ Jiji
Industry in focus

BANGALORE -- When Jeff Bezos arrived in India earlier this month, the Amazon CEO launched a major charm offensive. Bezos wore traditional local garb, predicted that "the 21st century is going be the Indian century," and promised $1 billion in investment.

A clue as to why came when the foreign policy chief of Modi's Bharatiya Janata Party tweeted that unless Bezos, who also owns The Washington Post, shared his flowery praise of India with his "employees in Washington," his "charm offensive is likely to be [a] waste of time and money."

India is not the only country where Bezos has taken heat over his newspaper, which has criticized Modi. Explosive allegations also emerged this week that Saudi Arabia hacked into Bezos' phone because of its columnist Jamal Khashoggi, who was brutally killed.

The difference is that India is a major market for Amazon. Indeed, Bezos' latest pledge raises his total commitments to India to $6.5 billion. Even so, Modi's commerce minister shrugged off the extra money as no "great favor."

This week, Modi's nationalists seemed to get their way in another segment of India's booming e-markets: food.

On Tuesday, Indian food delivery company Zomato bought Uber Eats, consolidating control of a $4.6 billion market that grew an estimated 170% last year, according to consultancy RedSeer. As Zomato's only other major competitor is Swiggy, another local player, the deal essentially creates a domestic duopoly.

Some even crowed that homegrown Indian companies had now taken on predatory foreign rivals for the first time -- and won. But have they? Even after the deal, and whether the government likes it or not, India remains a proxy battleground for some of the world's most powerful foreign tech companies. 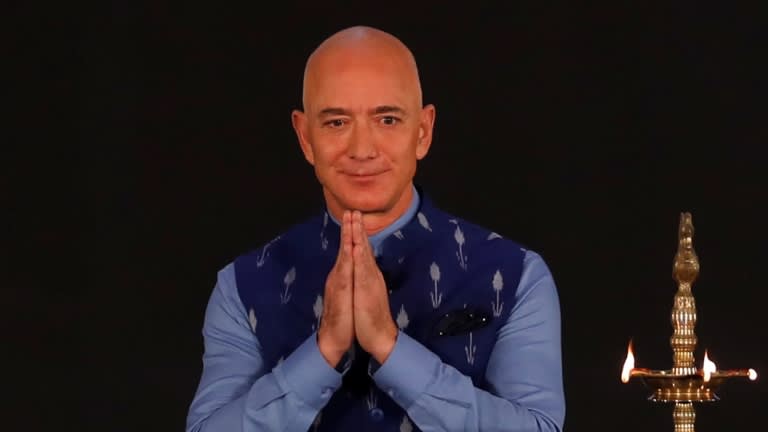 Zomato and Swiggy are funded, in part, by deep-pocketed Chinese internet giants Alibaba Group Holding and Tencent Holdings. At the same time, Google and Bezos' Amazon are building up their own presence in India's food business. It is not hard to see why. India's 1.3 billion people are increasingly ordering food online. So gaining control of this fast-growing market is a highly appetizing prospect.

The Zomato purchase of Uber Eats was certainly a big deal. Although neither side has disclosed valuations, it is possible to reverse-engineer a rough sense of the deal, the size of its participants and, more importantly, their prospects.

Zomato, which started as a restaurant review site in 2008, was reportedly valued at $3 billion when it raised $150 million from Alibaba's Ant Financial this month. As Zomato bought Uber Eats in exchange for a 9.99% equity stake, that values the deal at around $300 million.

Ranged against this giant, meanwhile, is Swiggy, which only jumped into online food deliveries in 2014. It had a reported valuation of $3.3 billion at its last funding round in December 2018, when Tencent became a shareholder. In terms of market share, Swiggy and Zomato are running roughly neck-and-neck. Both control between 35% and 45% of gross merchandise value, with monthly orders in the ballpark of 40 million each -- although Swiggy is thought to have a slight edge. The rest of the market had been held by Uber Eats, with around 10% to 15% of gross merchandise value, equivalent to 10 million orders a month.

The deal, therefore, should make Zomato the clear market leader in Indian food delivery. Indeed, Zomato boasted as much on its blog after the purchase of Uber Eats. Analysts are not so sure. They note that delivery customers and restaurant networks overlap, so one company's numbers cannot simply be tacked on to another's.

Rohan Agarwal, a director at RedSeer, said it "remains to be seen" whether the acquisition makes Zomato the clear leader. Satish Meena, senior forecast analyst at Forrester, thinks Swiggy will remain in the lead.

Market share, however, is not the most important metric. More telling is profitability -- especially as both companies have made heavy losses as they built up their market positions. Discounts and promotions increased both companies' reach -- and helped keep Uber Eats at bay. But it also meant that they burned through cash. Zomato is one of the two major competitors still standing in India's food delivery market, along with Swiggy. (Photo by Rie Ishii)

Zomato, for example, reported a $294 million operating loss for the year ended March 2019, even as revenue soared 202% to $206 million. Swiggy meanwhile logged a loss of around $330 million, based on current exchange rates, despite 170% revenue growth to about $158 million.

Such money-draining dynamics may be about to change, thanks to the merger and the duopoly that it created. The deal "is good for the industry as a whole," said RedSeer's Agarwal. "It is now easier for [Zomato and Swiggy] to work on profitability."

That is just as well. Because across the world, billion-dollar startups such as Zomato and Swiggy are having to adjust to a harsher financial reality. Ever since the fiasco of WeWork's attempted IPO last year, and the sagging share price of Uber after it floated on Wall Street, tech investors are less willing to tolerate huge losses in an endless pursuit of growth.

These changed times are reflected by both companies and their messaging. Zomato co-founder and chief executive Deepinder Goyal said in a half-year report that the company is working toward "a more sustainable" balance sheet and business.

By December, cash burn had fallen to $15 million, roughly a third of the amount in March 2019, Goyal recently told local media. More recently still, Gaurav Gupta, Zomato's chief operating officer, told the Nikkei Asian Review last week that the company would have positive cash flow before the end of 2020. 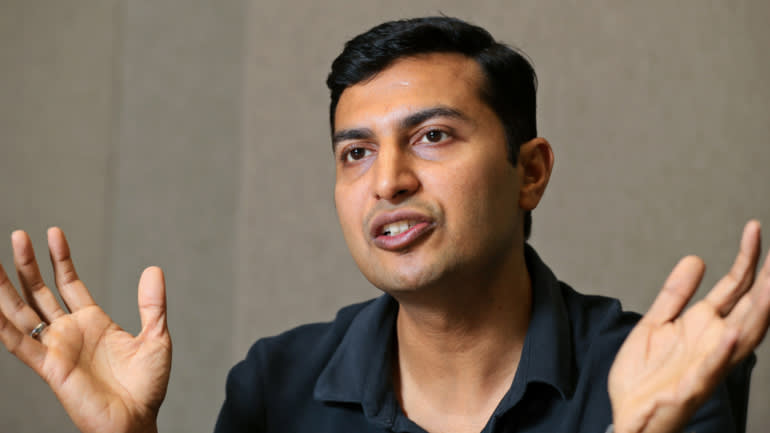 Swiggy COO Vivek Sunder is telling investors a similar message. Although the company only introduced profitability as a "key performance indicator" for managers last April, the WeWork debacle has since led them to set "much higher goals," he told Nikkei this week. Cash burn has been falling for the last six months, he said, and "the last funds we raised in December 2018 will likely last longer than we initially thought."

How each company plans to reach full profitability is different, though.

Zomato is trying to differentiate itself with ancillary services for restaurants and their customers. One is a restaurant discovery function that helps users of Zomato's apps and website to find new places to eat and make reservations. The restaurants, in turn, pay Zomato commissions. Another initiative involves supplying raw ingredients to restaurant kitchens.

"We are building very different things but people don't get that," Gutpa said. "All these non-delivery businesses are profitable."

As for its core food-delivery business, Gupta said he remained "very bullish." As the average middle class adult currently dines out or orders takeout only three or four times a month, there is huge scope to expand. Swiggy made its name with food deliveries but it aims to generate more revenue by running other errands. (Photo by Akira Hayakawa)

Swiggy, in contrast, is looking beyond food and into delivering other goods.

The company is rapidly building-out its errand dispatch service, which uses its existing delivery fleet and allows customers to order small items from neighborhood grocers and drugstores for a fee. The company wants non-dining businesses to generate 30% of total revenue within a couple of years, Sunder said. "We redefined our corporate mission to become the 'kings of convenience for urban consumers,'" he said.

So far, so good for the two Indian-led companies. Meanwhile, though, Google and Amazon are waiting in the wings.

Google is funding India's Dunzo, the leader in the same errand-running market that Swiggy wants to crack. The partnership between the startup and the deep-pocketed tech giant creates a host of commercial possibilities: services will be integrated with Google's search engine and powered by state-of-the-art artificial intelligence.

As Google is also a world leader in autonomous vehicle technology, that raises the prospect of a self-driving Dunzo delivery armada. Furthermore, Dunzo handles meal deliveries as well. Even though they currently account for only a fraction of its overall revenues, the scope for efficiencies are clear if the same drivers do errands as well as delivering food.

"Specializing in meal delivery limits utilization of delivery fleets, because demand spikes at lunch and dinner times," co-founder and chief executive Kabeer Biswas said. The company has already multiplied total sales 50-fold over the past two years and aims to reach 20 cities by the end of 2021, from seven today. Its food delivery business could easily grow along with the rest of the operation. 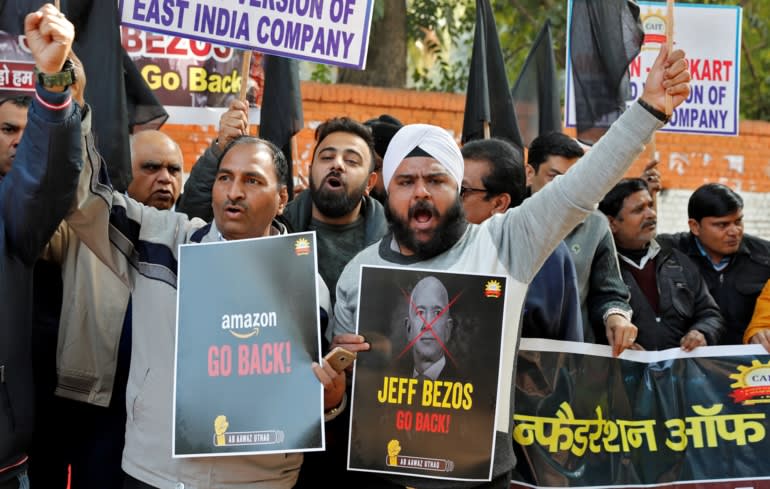 A protest in New Delhi against Bezos' visit: Amazon has met a fierce backlash in India, where it is seen as a threat to local businesses.   © Reuters

Finally, there is Amazon. For months, it has been rumored to be preparing to enter India's food delivery fray.

Amazon is already one of the two dominant forces in India's e-tailing sector. The other is Flipkart, which was acquired by Walmart in 2018. Critics say these two American monsters are choking the country's myriad small merchants, and the government has attempted to keep them at bay with restrictions on how they can source and sell products.

Indeed, only a few days before Bezos landed in New Delhi and declared his belief in the "Indian century", the country's competition commission announced it was investigating both Amazon and Flipkart. The companies face allegations that they undercut local businesses through exclusive deals with mobile phone brands and preferential treatment for sellers they control. Both insist they play by India's competition rules.

If nothing else, Bezos' visit sent a message that Amazon is not about to give up. But nor is Google. And nor, for that matter, are China's Ant Financial or Tencent either, even if their pursuit of profit is via local partners. Given this battling of proxy commercial interests, any celebration that Indian companies have now vanquished foreign rivals may be premature.