"BOE ensures at least 7% of our revenue goes to research and development every year, and in some years it could reach more than 10%," Wang said. "Some said we were crazy, but in my view it is crazy not to invest in R&D and not to insist on technology innovation. ... We have to rely on innovation."

BOE is primarily known as one of the world's largest producers of liquid crystal display panels. It accounted for 25% of global LCD panel shipments in the third quarter of 2017, according to a report by IHS Markit. But Wang said he is no longer concerned about mere numbers, and is more focused on "how to develop more disruptive products through innovation" amid the rise of the "internet of things."

The chairman said BOE has already taken steps to adapt to all-encompassing connectivity.

"On the basis of display technology, we gradually developed strengths in sensors, AI and big data technologies, and applied such technologies in four fields -- smart manufacturing, smart internet of vehicles, smart retail and smart energy, forming the smart systems business," he said. "We've also developed the health care services business by integrating those technologies with life sciences and technologies." 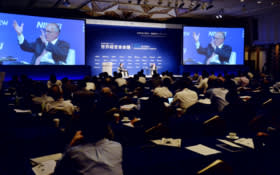 The venue of the 19th Nikkei Global Management Forum in Tokyo

Wang acknowledged that it is "very difficult to succeed on one's own" in the IoT age, with all companies facing challenges in business, management and so on. Only through cooperation, he suggested, can they fully grasp today's new opportunities.

"We will open up our application and technology platforms with a positive attitude, and develop innovations together with partners from other fields to create customer value and share growth opportunities."

"For now we don't have such plans," Wang said when asked about possible overseas manufacturing or investments.

His comments came against the backdrop of repeated threats by U.S. President Donald Trump to slap stiff tariffs on Chinese imports and speculation that state-controlled BOE, backed by the Beijing city government, may be interested in investing in embattled Japanese display tech companies including Japan Display Inc. and JOLED.

He did not provide a direct answer when asked whether BOE is interested in investing in or acquiring JDI or JOLED. "As long as there is an opportunity to achieve a win-win situation, we are open to possibilities," Wang said.

On whether the U.S. will be able to build a display industry amid efforts by Hon Hai Precision Industry to set up an LCD panel facility in Wisconsin, Wang said it will depend on whether companies can turn a profit making panels in America.

"The economic principle will fit here. Building an ecosystem in the U.S. to get closer to the market would be the right way to go if it turns out to be a good deal in terms of comparative advantage and economic benefit," Wang said.

He struck an optimistic note when asked whether he was concerned about Trump following through on his vow to raise tariffs on Chinese imports.

"If the policies are not reasonable, no one will benefit. Cooperation and achieving win-win [results] will bring America benefits. [U.S. officials] will think about what is in America's best interest," he said.

Apple adopted OLED panels for the first time in its iPhones this year, taking the technology mainstream. The new iPhone X has a flexible OLED panel that provides an edge-to-edge display and sharper color contrast than an LCD screen.