HONG KONG -- Insurance company FWD Group has made impressive inroads across Asia in just half a decade, pairing an aggressive acquisition strategy with a technology-focused approach aimed at tapping the region's young and growing middle class.

Hong Kong-based FWD has steadily expanded its market share here thanks partly to a lineup of easy-to-understand insurance products, such as savings-type plans with no termination fees, as well as its embrace of digital technologies. Television commercials featuring young, active people have helped the insurer win over younger consumers.

The company earned more premium revenue via direct sales channels such as the internet than any of its peers in the January-September period, government data shows.

"Not having a big legacy [such as large agency networks] enables us to invest in technology and make changes very fast," CEO Huynh Thanh Phong told The Nikkei. 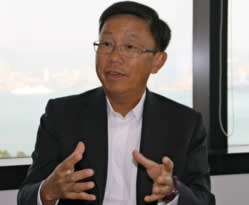 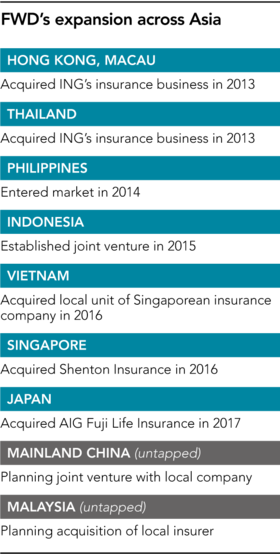 Pacific Century acquired the Hong Kong, Macau and Thai insurance operations of Dutch financial group ING in 2013, rebranding them as FWD. It has invested more than $3 billion in the business over the last five years. "As a private company, we can take a very long-term view in our investment," said Phong, who took the helm in 2014 after leading AIA Group's South and Southeast Asian operations.

FWD seeks to become a "pan-Asian" insurer, and acquisitions form a key part of its strategy toward this end. The company in 2016 bought Great Eastern Life (Vietnam) from Great Eastern Life Assurance, as well as Singapore's Shenton Insurance. It also expanded into the Philippines in 2014 and Indonesia via a joint venture in 2015.

The 10 countries in the Association of Southeast Asian Nations "have a combined population of around 600 million people," Phong noted.

"Young people join the workforce, accumulate wealth and enter into [the] middle class. It's very conducive" to selling life insurance, he added. "Japan would be one of the three main growth engines for FWD," along with Hong Kong and Thailand, the CEO said. "We want to have double-digit growth in Japan."

Filling in the gaps

As for FWD's next move, Phong pointed out two major blank spots on its map: mainland China and Malaysia. "We are working hard to enter into those two markets to make it complete," he said.

The company is seeking out an acquisition to bring it into the Malaysian market and preparing to set up a joint venture with a mainland Chinese partner. "Good life insurance assets are very rare," Phong said. "If you have a quality target, the valuation will remain high."

The Chinese government said in November it would relax limits on foreign investment in the life insurance sector, raising the ownership cap to 51% in 2020 and removing it entirely in 2022. This liberalization "makes us feel much more comfortable about putting significant investment in China," Phong said.

The FWD chief acknowledged the challenges involved in competing in a mainland market dominated by big domestic players such as Ping An Insurance Group. "China is similar to Japan. You have to pick your battles," he asserted.

"We will focus on securing the right partner with the right strategic advantage," he added. "There are a lot of nonperforming [joint ventures] in China. We don't want to be one of those."

Competition is fierce in Asia's insurance sector, with such giants as Hong Kong-based AIA, the U.K.'s Prudential and Canada's Manulife Financial in the fray. Regulations vary widely from country to country, as does the maturity of each market -- sales growth centers on banks in Thailand and insurance agencies in Indonesia and the Philippines, for instance. Diversification is good for financial services, Phong said.

The CEO cited his company's focus on Asia as an advantage over bigger rivals. "I don't have to wait for London or New York," he said. "We can make decisions very fast and move faster than competitors."

FWD has 2.5 million customers and $24.4 billion in assets under management -- on a par with a small-to-midsize Japanese insurer. How it fares in a market teeming with big fish remains to be seen.