Intel aims to challenge TSMC over Apple chip orders by 2018 Intel, the world's largest chipmaker by revenue, announced earlier this month that it will license technology from British mobile chip designer ARM with the aim of securing more business from smartphone companies. LG Electronics will become the first smartphone company to adopt Intel chips following the ARM deal.

While Intel still dominates in the faltering personal computer market, it has been struggling in the mobile era with ARM virtually monopolizing smartphone chip technology.

TSMC, the world's largest contract chipmaker, has thrived partly from its close partnership with ARM during the rapid rise of smartphones over the past decade, but Intel's new alliance with the British innovator could be a game changer.

"TSMC could face tough competition as soon as 2018 or 2019 as Intel is likely to gain orders from Apple by then," Samuel Wang, a veteran semiconductor analyst at research company Gartner, told the Nikkei Asian Review. "Intel has begun to engage with Apple and it aims to grab one or two top-tier customers from TSMC."

Intel fumbled in its previous attempts to grow its foundry business, where it makes chips for others, as the U.S. company prioritized production of PC and server chips for its own use, according to Wang.

But that could change this time around, he said, as Intel now sees its foundry business as a key source of new revenue, which can be used to invest in future technologies.

A senior Taiwanese chip industry executive shared Wang's views. "Intel is definitely the most formidable challenger for TSMC," the executive told the NAR.

"There is no rivalry between Apple and Intel so it's really likely that Apple could shift some orders there. The move is also in line with Washington's policy to encourage U.S. companies to make more products at home," the person said.

Intel Vice President Zane Ball, who oversees the company's foundry business, told developers in mid-August that the U.S. chipmaker can offer a better service than its rivals because it is not just a chip producer.

"We can do design, and we can do assembly and test. We have remarkable sources and we will bring these capabilities to our customers as well." Ball added that with ARM's licensing support, Intel is able to do more in the mobile chip sector. 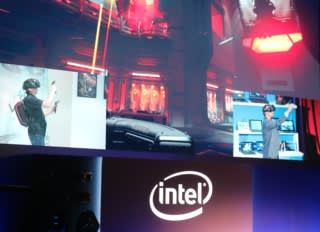 Moves by Intel to expand its foundry business could put pressure on TSMC (Photo by Cheng Ting-Fang).

The move by Intel to promote its foundry business is an attempt to compensate for an ongoing decline in the PC chip market. For the three months ended in June, Intel's net profits halved to $1.3 billion from a year ago though its revenue rose 3% to $13.5 billion.

Intel is currently making only $100 million annually from its foundry business, with a limited number of customers including Chinese mobile chip designer Spreadtrum Communications, a key rival to Qualcomm of the U.S. and MediaTek of Taiwan. Intel has a 20% stake in Spreadtrum.

Up until now, the Santa Clara, California-based company has mostly stuck to designing, producing and marketing chips under its own brand.

Yet with its colossal size, it could still pose serious threats to rivals in the foundry market. Founder and Chairman of TSMC, Morris Chang, said in June that Intel is a potential rival for his company in the longer term.

Intel, TSMC, and Samsung Electronics are the world's three leading chipmakers, and the only players capable of spending big sums to develop cutting-edge semiconductor technology and build advanced production facilities.

They will allocate $9.5 billion, $10 billion, and $11 billion respectively for capital expenditure in 2016, according to research firm IC Insights.

For 2016 and 2017, TSMC is reportedly monopolizing orders for iPhone core processors, while it still had to share Apple business with Samsung in 2015.

Apple contributed to 16% of TSMC's revenue in 2015 and that is expected to increase to around 20% this year.

TSMC spokesperson Elisabeth Sun said competition was always out there and the Taiwanese chipmaker would continue to provide the best services to customers.

"TSMC's mission is to provide the world's No.1 foundry services to customers and we will keep doing that," Sun told the NAR.