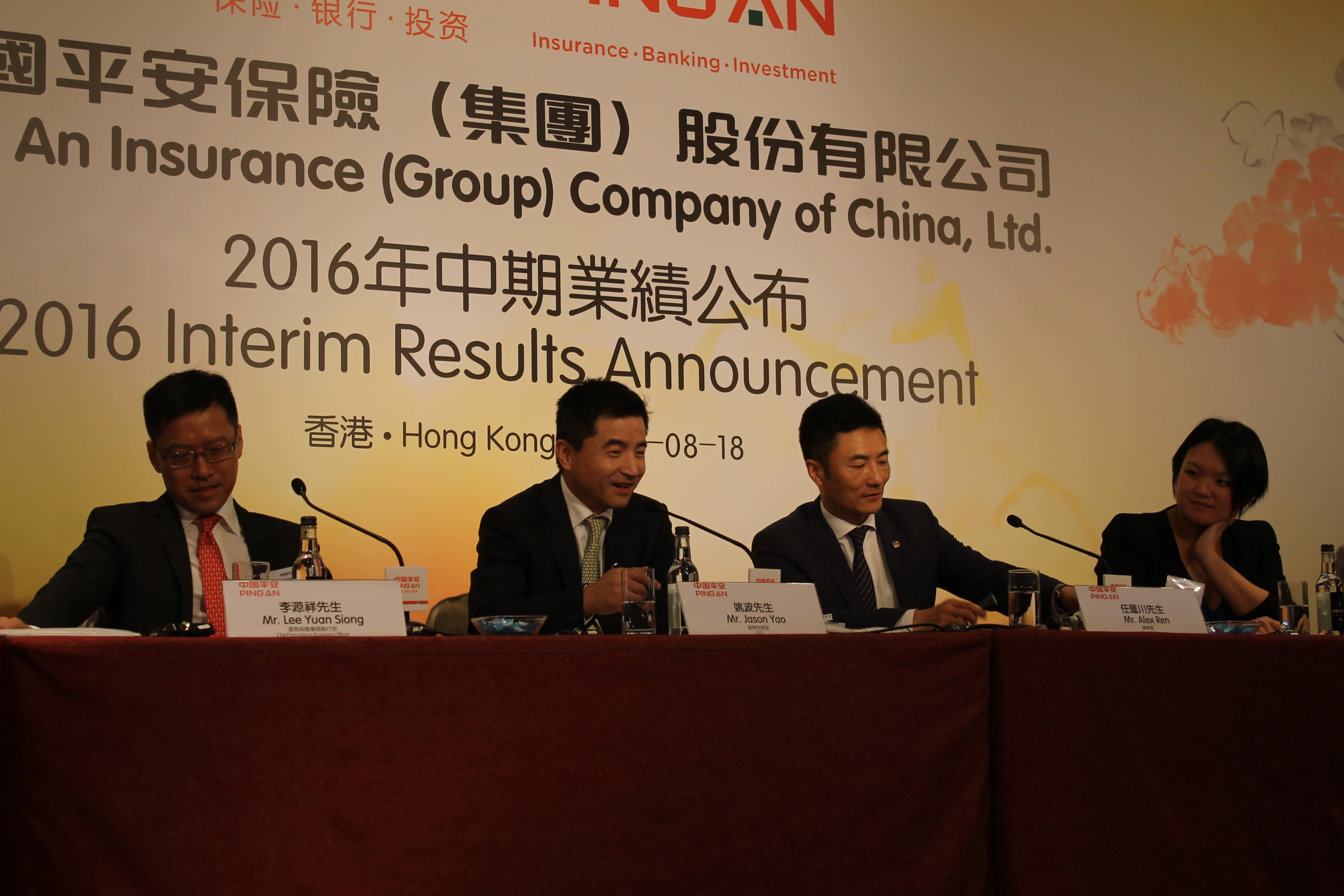 HONG KONG -- China's largest joint-stock insurer Ping An Insurance delivered estimate-beating half-year results on the back of aggressive diversification, helped by a one-time gain in internet finance and growth in insurance income. The advance came despite a steep decline in investment income.

Net profits of the Shenzhen-based financial conglomerate climbed 17.7% year-on-year to 40.78 billion yuan ($6.15 billion) for the six months ended in June. Consolidated revenue climbed 8.4% to 407.83 billion yuan in the same period. Total assets topped 5.22 trillion yuan as of June, up 9.5% from the end of last year.

Internet finance recorded the strongest results of any division, bouncing from a net loss of 609 million yuan last year to profit of 7.14 billion yuan. It accounted for 17.5% of the group's overall net profit, outstripping profits from the property and casualty insurance businesses as well as the banking arm.

The gains stemmed from the restructuring of Lufax, China's largest peer-to-peer lending platform valued at 18.5 million, which Ping An is looking to spin-off this year. In May the group integrated the micro-financing platform Puhui Financial, as well as institution-focused Shenzhen Qianhai Financial Asset Exchange, or QEX, into Lufax, and booked 9.5 billion yuan of gains from it. Discounting the one-off event, Ping An's internet finance business -- which also embraces electronic payment, automobile, real estate, and healthcare services -- is still running at a loss.

Brushing off concern over the segment's viability, Ping An said it requires more recurrent capital expenditure because it is an apparatus for value creation.

"Internet finance has added tremendous value to our primary business," said Jessica Tan Xinying, Ping An's chief information officer, referring to the fact that 35.9%, or 6.37 million, of new customers in its core finance business had migrated from the group's fast-expanding internet user base. This hit 298 million users as of June, up 23.3% from January. "The conversion rate was only 19% [at the] end of last year, and single-digit a year ago," said Tan.

The company said these offshoots would generate income organically with time, and become ripe for capitalization. An example of this process is Ping An Securities, which on Monday gained shareholders' approval to go public. Beyond raising capital for the brokerage to fulfil tougher regulatory requirements, the potential listing also illustrates the company's long-term strategy to spin-off more of its subsidiaries, according to Alex Ren Huichuan, Ping An's president.

The results defied the trend in the industry, which is expected to suffer a 54.1% year-on-year decline in profits, according to the China Insurance Regulatory Commission. Profits of life and property insurers, said the regulator, will plummet by 65.6%, and 43.5% respectively, as total investment returns during the period dip 2.67 percentage points to 2.47% compared to last year.

The largest player in the market, China Life Insurance, warned last month that its profits for the first six months would fall as much as 70% to 9.45 billion yuan, in parallel with the slide in investment income.

Ping An's total investment returns almost halved from a year ago to 38.03 billion yuan, with yield falling to 4.4% from 7.7%. "Subdued interest rate and asset prices would surely strain our insurance business," said Peter Ma Mingzhe, Ping An's CEO. "We were aware of the issue three years ago, since then we have tended to invest in long-term assets with duration of seven to 10 years."

To diversify risks, the group said it would also scale up investments abroad, which appears to offer more choices and better returns. "Outbound investments in the first half amounted to 77 billion yuan, up from 39.8 billion yuan at the end of last year. Including the unsettled, but pledged, 40 billion yuan of investments, foreign assets, totaling close to 120 billion yuan, now makes up 7% to 8% of our total assets [in the insurance funds]," said Timothy Chan, chief investment officer.

In June Ping An took over Autohome Inc., China's most visited car intelligence web operator, from Melbourne-based phone company Telstra Corp. through buying a 47.4% stake. The $1.6 billion deal, which prompted a management shake-up at Autohome, including the ousting of CEO James Qin, has caused its New York-listed shares to shed more than 28% of their value to date. Ping An envisioned the acquisition would create an online-to-offline platform that directs more sales to its property and casualty insurance business.

Ping An's banking arm, dually listed in Hong Kong and Shenzhen, recorded a 6.1% year-on-year increase in net profits to 12.29 billion yuan. Growth in loans and advances at 11.7% outpaced that of deposits at 9.5%, with net interest margin slightly improved by 8 basis points to 2.79%. The non-performing loans ratio increased by 11 basis points to 1.56%, while the provision coverage ratio continued to trend downward to 160.82%. The bank's capital strength also weakened, as its core tier-1 capital adequacy ratio declined by 54 basis points from the end of last year to 8.49%, versus the regulatory requirement of 7.5%.