Is SoftBank spending wisely on Arora?

TOKYO -- SoftBank's revelation that it paid Nikesh Arora, its new president and chief operating officer, about 16.5 billion yen ($133.06 million) last fiscal year has raised eyebrows. Critics reckon the company is investing too much in one man. Others say the former Google executive is quickly proving his worth. 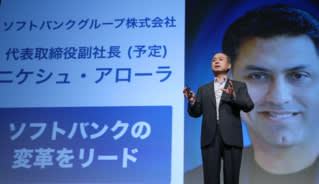 The fat figure was included in the Japanese telecommunications and Internet company's securities report for the fiscal year ended March, submitted June 19. Arora only joined the company last September; he has been declared the "primary candidate" to succeed Chairman and CEO Masayoshi Son.