Is it the end of the motorcycle as we know it? TOKYO -- Japanese motorcycle producers have a problem -- governments around the world are tightening emissions regulations.

Actually, that is only one of their problems, but the one that is forcing them to discard some old models and introduce new ones.

Yamaha Motor will cease domestic production of its flagship VMAX in August, while Honda Motor will launch an electric-powered motorbike in Japan as early as 2018.

The biggest question now facing motorcycle makers is how they should use their limited development funds to sow the seeds of future growth.

Yamaha had to use all of its technological capabilities in developing the large VMAX, which has a V4 engine. The bike has given freedom to riders at home and abroad since hitting roads in 1985. But it will come to a dead end in August.

Yamaha has also decided to discontinue other models, including the XJR1300 motorbike and the Majesty, a big scooter with an engine displacement of 250cc.

Said a representative of one motorcycle dealership in Tokyo: "They were popular models that reflected the times. The [curtain call] is regrettable as the bikes have many longtime fans."

In 2016, Kawasaki Heavy Industries decided to stop making one of its own big bikes, the popular W800.

Eventually, the W800 lost the emissions battle. Before last year, Kawasaki was able to bring the motorcycle, which sports an air-cooled engine, up to snuff every time emissions standards were tightened.

Japan last tightened its emissions rules in October. The new standards -- like halving the release of nitrogen oxide, or NOx -- were immediately applied to new models.

Come September, models in production since before the regulations were introduced will be subject to the tougher rules. This is prompting motorcycle makers to pull the plug on some of their older bikes.

Japan's regulations are expected to be further strengthened in 2020, to levels equivalent to Europe's Euro 5 emissions standards.

One way Japanese motorcycle makers have sought growth is by increasing their presence in Southeast Asia, India and other emerging markets. But soon these markets will also be more tightly regulated. 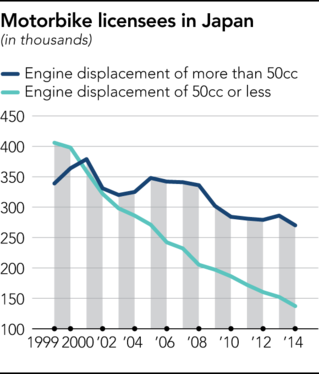 This is putting Japanese motorcycle makers under pressure to come up with new engines, exhaust systems and other prone-to-pollute parts, then launch new models in various countries. But heavy development costs will weigh on them.

Meanwhile, Japan's motorcycle market shows no sign of hitting bottom. According to the Japan Automobile Manufacturers Association, or JAMA, domestic demand for motorcycles is projected to drop 1.6% in fiscal 2017, which starts on April 1, to 369,000 units.

To be sure, India and other emerging markets are expanding. But consumers in these parts of the world prefer low-priced bikes. Japanese makers will find it difficult to pass on increased development costs to buyers in these countries.

As a result, only the most promising models will get development money.

As for their domestic market, Japanese manufacturers are focusing on a segment where demand remains firm -- mid-size and large models with engine displacements of 125cc or more. New models will be delivered that meet the ever-stricter emissions rules.

This spring, Honda is releasing the CBR250RR, a 250cc mid-size sport bike. Honda's so-called "strategic vehicle" is a bid to catch up with rivals in the 250cc segment.

Suzuki Motor, meanwhile, is releasing the GSX250R, a 250cc sports bike. The company developed the model after improving the combustion efficiency of an engine used in previous models.

To deal with the even tougher standards that will be adopted in 2020, Honda in 2018 is to start selling an electric-powered motorcycle that will be able to go a long way on a single charge.

Honda will also aim to maintain its share of Japan's shrinking 50cc scooter market. In October 2016, it and Yamaha announced an agreement to consider forming an alliance that would develop and produce 50cc scooters for the domestic market.

By supplying products to Yamaha under an original equipment manufacturer agreement, Honda wants to lower its development burden.

Whether it is India or emerging markets in Africa and elsewhere, any country will eventually see its motorcycle market mature. So, what should Japanese motorcycle makers do to secure long-term demand?

Their mission is to win the hearts and minds of not only ordinary consumers in need of transportation but also of consumers who "enjoy riding motorcycles as a hobby," as one JAMA representative put it.

That road promises to be bumpy.