It's sea urchin season in Japan -- if you can afford it

TOKYO -- Japan is the largest consumer of uni, or sea urchin, a popular and expensive ingredient in sushi and kaisen-don seafood rice bowls. Japanese are fond of the sea fruit's rich, sweet taste that comes with a faint scent of the sea.

In Hokkaido, it is now uni harvesting season. But Japan has a much bigger appetite than what the northernmost prefecture can provide. So it imports sea urchins from Chile, South Korea and Russia. The imports used to be cheaper than those harvested in the seas off Hokkaido and nearby Aomori Prefecture, allowing supermarkets and not-high-end sushi resutaurant to carry the prized ingredient.

Now imported uni prices are on the march. 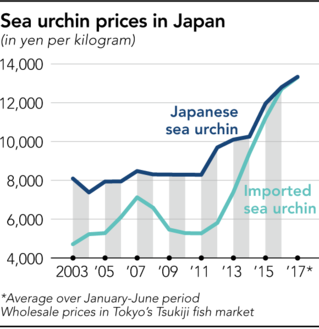 "Sorry, but we don't have imported sea urchins today," a waitperson apologized to a customer in a restaurant that specializes in uni located just outside of Tokyo's famed Tsukiji fish market. Many of the eateries in this area are open to retail customers. This particular shop is known for a kaisen-don topped with five varieties of domestic uni that costs 6,458 yen. That's a $60 meal. The shop used to also offer a 2,862 yen version with imported sea urchins. Not this summer, though.

While prices for both Japanese and imported sea urchins have been soaring over the past years, the spike in import prices is more significant. Now the price gap between domestic and imported uni is nonexistent.

In 2003, the average Tsukiji wholesale price for domestic sea urchins was 8,088 yen per kilogram. That for imports was 4,708 yen. During the first six months of this year, prices for each averaged around 13,000 yen. In May alone, imported sea urchins were even more expensive than their domestic counterparts. Tokyo's Tsukiji fish market deals with the largest volume of sea urchins in the world.

Of course eateries that specialize in uni are going to buy the domestic harvests if they cost the same or less than imports that lose their freshness on their way to Japan.

Notably, the amount of imported sea urchins arriving at Tsukiji fell in half over the decade through 2016. That for Japan-harvested uni was down 14% during the same period. A major cause of the global decline in sea urchin catches is rising sea temperatures.

More than 90% of sea urchins consumed in Japan are either ezo-bafun uni (short-spined sea urchin) or kita-murasaki uni (northern sea urchin). Both are of high quality and harvested in cool waters off Japan's Hokkaido and Aomori as well as in oceans around Russia and Chile. But the rising water temperatures could advance harvest season and make the fruit scarce.

The effect is not unique to uni. But the sea fruit does face another hurdle on its way to Japanese tables -- a lack of proper overseas production facilities.

During Japan's late-1980s economic bubble, North America had a number of sea urchin processing plants, mainly on the West Coast. These factories would remove the spiny shells and neatly lay out the fruit in wooden plates. Sometimes workers would steam the uni and have them ready to be shipped to Japan (or more precisely, to expensive sushi restaurants). "Some processing businesses must have made a fortune from exporting sea urchins," said a director at Chuo Gyorui, one of Tsukiji's biggest wholesalers.

But the go-go days did not last long. And as Japan-Russia relations improved, Japan began importing sea urchins from the country with the more advantageous proximity. As fresh as those from Hokkaido and of the same quality, Russian sea urchins became highly valued in Japan. As the trend set in, those West Coast plants grew quiet, and skilled workers left the industry.

And it is making kaisen-don even more of a delicacy.