TOKYO/SHANGHAI -- Major Japanese trading house Itochu is getting ready to enter the e-commerce market in China to sell Japanese products in collaboration with four Chinese and Thai partners. 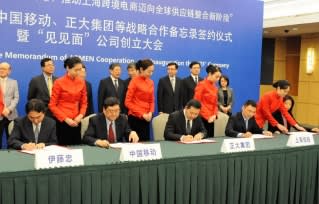 Representatives of five partners in the new e-commerce business, including Itochu, Charoen Pokphand Group of Thailand and the Shanghai municipal government, participate in a signing ceremony in Shanghai April 30.

The five companies signed an agreement Thursday to establish an e-commerce company called Face to Face, which will begin operating this autumn. The signing ceremony at the Shanghai city office was attended by leaders of the partners, including Itochu President Masahiro Okafuji, Shanghai Mayor Yang Xiong and Charoen Pokphand Chairman Dhanin Chearavanont.

The e-commerce market is rapidly expanding in China, especially among young people. Transactions topped 50 trillion yen in 2014, compared with about 11 trillion yen in Japan in 2013.

Alibaba Group dominates the market. But given its huge scale, even a small portion of the market offers big business opportunities.

Japanese companies tried to break into the market in the past, but with little success. 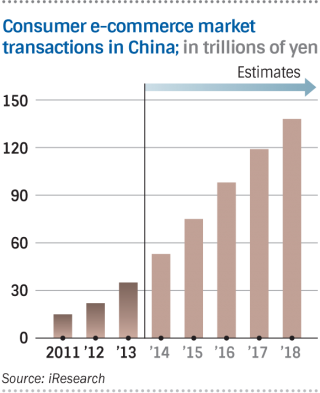 Rakuten entered the market in 2010 but retreated a year and half later after unsuccessfully engaging in price-cutting competition in disregard for profit, and failing to fully understand Chinese demand.

Alibaba is so dominant that other companies find it difficult to build name recognition among Chinese consumers on the e-commerce market.

This is why Start Today, the Japanese operator of the Zozotown fashion e-commerce site, closed its site in China in 2013.

Itochu will seek to achieve a formidable market presence on its advanced capacity of procuring apparel, foodstuffs and other products. For example, it has trademark and other marketing rights for more than 150 Japanese and overseas apparel brands and can procure paper diapers from paper manufacturers and powdered milk from milk makers.

Mobile major on board

The new venture will benefit from Charoen Pokphand operating a commercial center in Shanghai and Citic having a large number of businesses under its wing. China Mobile's participation is another advantage.

The venture hopes to lure China Mobile's 800 million or so subscribers to its e-commerce site by sending short messages to them and installing apps in their handsets. The partners believe they can avoid the fate of other companies that succumbed before due to failure to raise their name recognition. 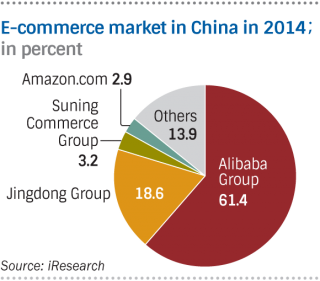 As Chinese consumers are growing more concerned about the quality of goods, the partners see popular trust in Japanese merchandise as an advantage for them.

An Itochu official said the new venture will win Chinese consumers' confidence because the Shanghai municipal government will be responsible for the storage of goods as a partner.

But the Chinese economy, as measured by gross domestic product, grew at the slowest pace of 7.0% in six years in the first quarter of 2015.

Jiro Iokibe, a senior analyst at Daiwa Securities, warned of the high risks associated with operations concentrated on China, because of their uncertain outlook in light of slowdowns in the nation's economic growth and personal consumption.

As the Chinese government may suddenly change its policy, participation of Citic and the Shanghai government in the new venture is a double-edged sword.

While Mitsubishi Corp. and Mitsui & Co. are Japan's two largest trading houses, Okafuji has reportedly been telling Itochu officials repeatedly that the company should seek to surpass Mitsui and catch up with Mitsubishi.

Itochu logged 300.5 billion yen in net profit in fiscal 2014 ended March, up 23% from the previous year and comparable to Mitsui's estimated 320 billion yen.

Leveraging its strengths in nonnatural resources businesses, Itochu has set its sights on surpassing Mitsui by expanding these activities. Entering the e-commerce market in China is a core part of the strategy.

Japanese manufacturers have shown strong interest in Itochu's new business. An official at a leading maker of articles for daily use said the venture is expected to "grow as a sales route because of the Japanese trading house's involvement."

The new challenge is about to get fully underway amid speculation about whether it will become a growth engine as Itochu expects.