TOKYO -- Japan Airlines this month hiked the fees it charges passengers who want to upgrade their economy seats to premium economy at the airport. JAL is betting that business travelers will be willing to pay 5,000 yen to 10,000 yen ($45.27 to $90.53) more than they used to for this kind of change.

The fees vary depending on seat availability.

The cost of making a similar switch on flights between Japan and Southeast Asia (as well as other regions) has doubled from 10,000 yen to 20,000 yen, though rates were left unchanged on some routes. 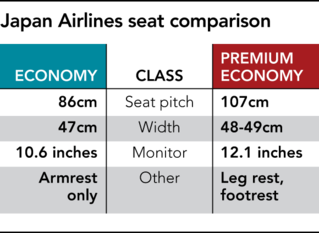 JAL's premium economy seats on international flights are 1cm to 2cm wider and have 21cm more legroom than economy class seats. They also have leg rests and footrests.

So upgrading at the airport is actually much cheaper than booking a premium economy seat in advance, but it also gives the airline one last chance to get passengers to pay more.

Now JAL is taking away some of this discount. At the same time, it is reducing the advance fares it charges for premium economy seats.

The juggling act is an attempt to increase the occupancy rate for this section of the cabin.

Other airlines have different upgrade policies. All Nippon Airways, for example, only allows airport upgrades to business class.

A growing number of budget airlines are providing more comfortable seats as well. Scoot, a long-haul subsidiary of Singapore Airlines, offers ScootBiz seats, which are equivalent to major airlines' premium economy seats. AirAsia X, the long-haul affiliate of the Malaysia-based AirAsia group, has premium flatbed seats in its midsize aircraft.