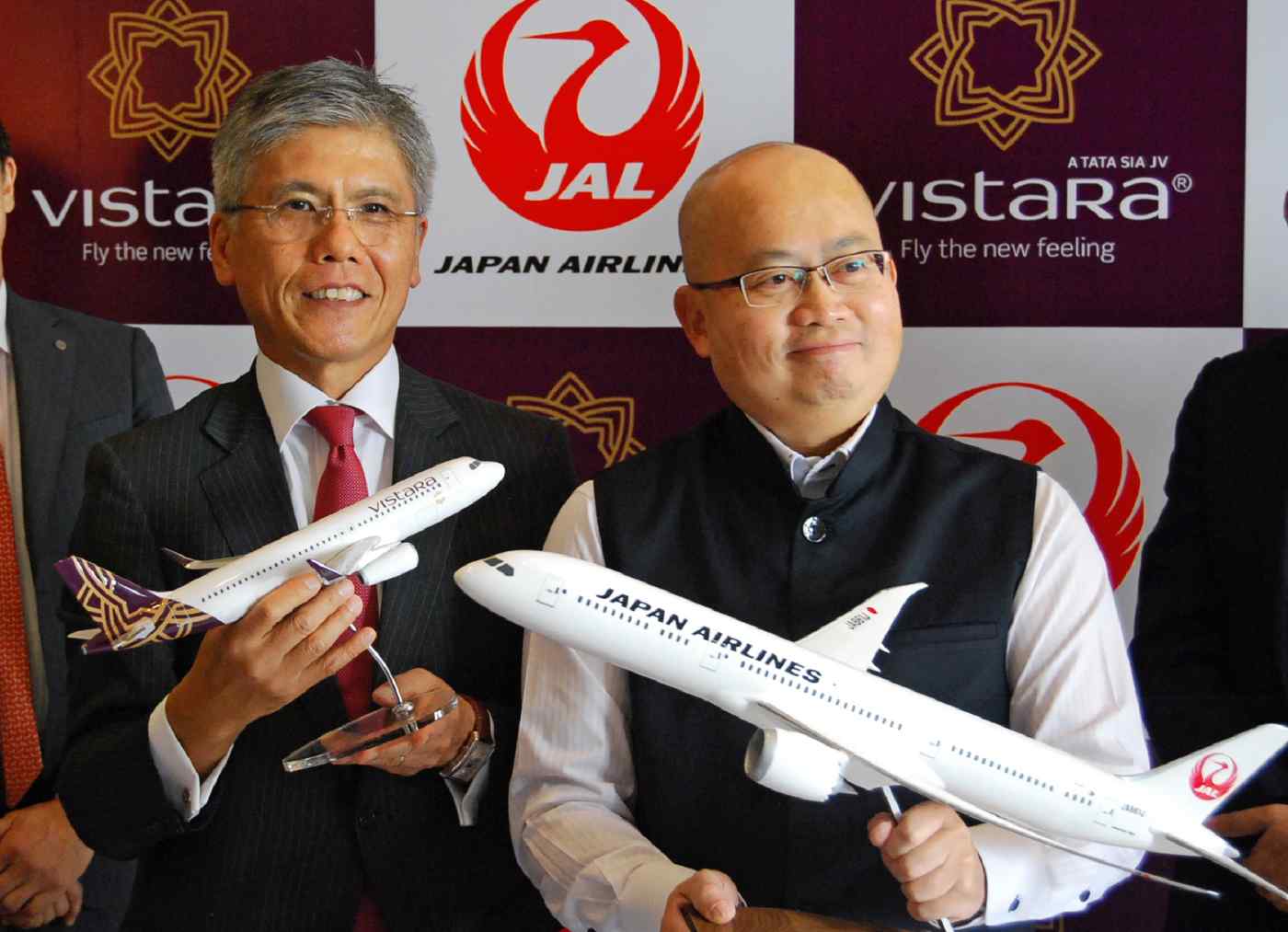 JAL announced plans Thursday for code-sharing with Vistara on Japan-Delhi flights as well as domestic service within each country by the end of fiscal 2018. The carriers intend to link their mileage programs by the same year or later.

As more Japanese companies set up shop in India, both airlines expect higher travel demand between the two countries.

India's largest conglomerate owns 51% of Vistara, which began flying in January 2015, while Singapore Airlines holds the remaining 49%. The full-service carrier operates mainly out of Delhi and flies Indian domestic routes.

JAL operates daily flights between Delhi and the Tokyo area's Narita Airport but has no domestic network in India. The partnership will expand the Japanese airline's coverage in India to as many as 21 destinations.

JAL's rival, All Nippon Airways, flies to both Delhi and Mumbai from Narita. The ANA Holdings unit has code-share arrangements with major local airline Jet Airways and links its mileage program to state-owned Air India, a fellow member of the Star Alliance network.

JAL belongs to the Oneworld airline alliance, which has no Indian carrier as a member. This prompted the company to look for an Indian partner. Vistara CEO Phee Teik Yeoh said the airline considers Japan a very important market, expressing hope that the carrier eventually would have its own routes into Japan.

JAL launched an international offensive after being freed from business restrictions tied to a 2010 government bailout. Japan's transport ministry had limited the airline's investment and route expansion to support fair competition, given the taxpayer money involved in the rescue.

JAL's retained earnings for fiscal 2016 reached nearly 650 billion yen ($5.98 billion at current rates), roughly double that of ANA, due to factors such as downsizing and exemption from corporate tax based on business rehabilitation law.

As the restrictions were lifted at the end of March, JAL debuted a service connecting Tokyo's Haneda Airport and New York -- a high-earning route. On Sept. 1, the company started flights between Narita and the Australian city of Melbourne, a route not offered by ANA. The company also begins flying between Narita and Hawaii's Kona on Sept. 15.

Back in July, JAL announced a partnership with Vietjet, Vietnam's leading budget carrier. The Japanese company also offers business jet connection services in Europe, in collaboration with a French company. The flagship airline is working frantically to make up for the time lost under the post-bailout restrictions.

ANA also looks to boost services on high-earning routes. The airline plans to increase Narita-Los Angeles service to two round trips per day in October.