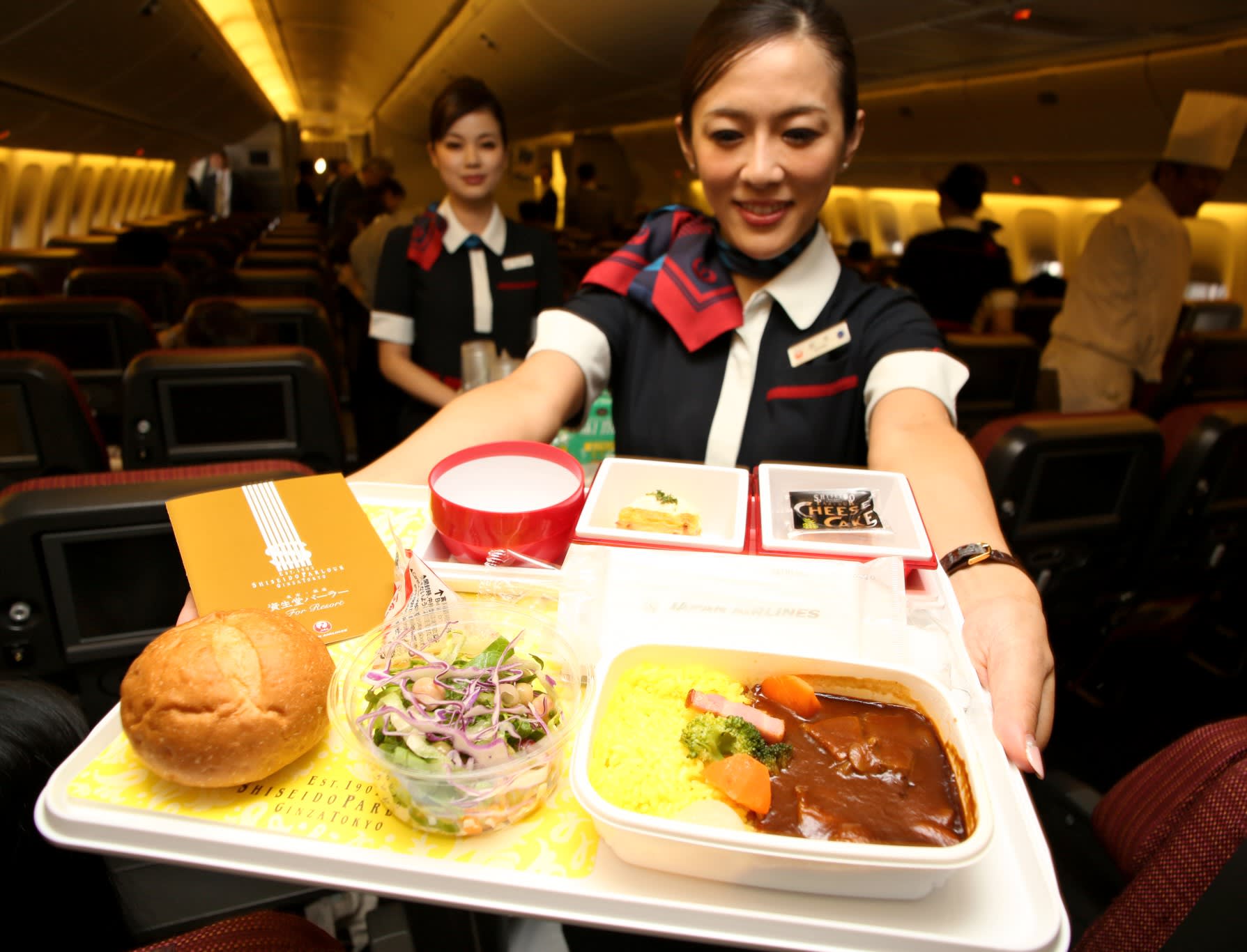 The airline said Thursday it will introduce meals inspired by the menu of Shiseido Parlour, a renowned Japanese-style Western-cuisine eatery in Tokyo's Ginza district.

Speaking with reporters in Tokyo, JAL President Yoshiharu Ueki recalled going to the restaurant with his father, actor Chiezo Kataoka. "My father took me there when I was a child and said they have the world's best potage soup and hashed meat with rice," Ueki said.

JAL's catering company worked with Shiseido Parlour chefs for several months to replicate the restaurant's tender, rich stewed beef that goes well with rice. The new meals will be served in economy and premium-economy classes starting Sept. 1 on Honolulu-bound flights from the Narita, Chubu and Kansai airports serving the Tokyo, Nagoya and Osaka areas, respectively.

JAL has a history of cultivating Hawaii service since it began flying to Honolulu in 1954. In the 1960s, the airline began offering package deals combining flights and hotel stays. JAL also has co-sponsored the Honolulu Marathon since 1984 to draw travelers even during winter.

While rival All Nippon Airways offers Hawaii service only out of Tokyo-area airports, JAL flies from the Osaka and Nagoya areas as well. JAL's Japan-Honolulu market share is roughly double that of the ANA Holdings unit, measured by the number of flights.

Economy-class service to Honolulu offers an opportunity for JAL to expand its customer base because the airline's bigger capacity on the routes tends to attract people who usually do not fly with the company, including young passengers. To cultivate its "fan" base, JAL seeks to go beyond the meal upgrade.

The airline has introduced seating with extra legroom of about 10cm, along with a thinner backrest. This reduces the number of seats per plane but improves comfort.

And in January, the company will change the seat layout on the Boeing 777 jet. Rather than the conventional placement of three sets of three seats in a row, the grouping will be two, four and three seats to increase the odds of couples getting to sit together. Honolulu service draws more couples than other routes, so JAL hopes this feature will distinguish its service.

JAL is responding as its rivals go on the offensive. ANA has said it would introduce three A380 jets to the Honolulu routes in spring 2019. The new ultra-large Airbus jet will offer a classy feel in first-class and other cabins. The plane also can seat more than double the passengers of conventional models, and ANA expects to increase its capacity on Japan-Honolulu routes by about 20%.

ANA surpassed JAL last fiscal year for the first time in passengers for international flights, owing to the company's focus on business travelers. ANA now seeks to gain momentum in leisure travel as well by enhancing services to Honolulu, a familiar vacation destination for the Japanese.

U.S. competitor Hawaiian Airlines aims to start direct flights from Tokyo's Haneda Airport to Kona on Hawaii's largest island in December. Kona is known for coffee farming and astronomical observatories. No other airlines fly there directly from Japan.

JAL's leading Japan-Honolulu market share has slid from 45% in 2004 to 30% this year as rivals gain ground. ANA expanded its share during that period by 2.5 percentage points to 15%. Hawaii is turning from an untapped blue sea to a crowded red ocean for JAL.

Even when JAL went bankrupt and slashed the bulk of its international services, the airline kept Honolulu service mostly intact. If the company lets rivals gain momentum in this deeply invested route, JAL's international standing will weaken.