A construction of a huge liquefied natural gas plant on the Yamal Penninsula, Russia, is under way by JGC.
April 25, 2017 17:00 JST | China
CopyCopied

TOKYO -- A fleet of ships is en route to the Russian Arctic, loaded with materials for construction of a huge liquefied natural gas plant on the Yamal Peninsula by JGC, a leading Japanese engineering corporation.

As the fleet makes its way from more temperate climes in Asia to the frigid north, company officials closely monitor its progress at a fleet operations center located in a quiet residential neighborhood on the outskirts of Paris.

JGC operates the center around the clock along with other companies, including Technip, a French engineering firm involved with the project. The center controls the movement of the fleet, issuing instructions such as to wait at a port due to inclement weather or to warn of pirates.

JGC is overseeing shipping operations for the first time due to the size and scope of the Yamal undertaking, one of the largest modular construction projects on record.

The LNG plant will be built by stacking huge blocks produced at 10 shipyards and other subcontractors in China, the Philippines and Indonesia. When finished, the plant will be able to liquefy 16.5 million tons of natural gas per year. A shipping terminal is due to be completed in 2019.

The work is being performed under grueling conditions, with temperatures falling to 50 C below zero in winter and while polar bears scavenge the site.

Given the difficulty of hiring workers, JGB decided on a modular approach to facilitate construction.

Although the company has used the same approach to build two plants in the past, the Yamal project is unprecedented in scale. For example, the largest modules are 30 meters high by 100 meters long and weigh 5,000 tons. About 80 of the required 142 modules -- with a combined weight of 450,000 tons -- have already been delivered.

The amount of materials needed for the Yamal project is "beyond comparison", said Yoshiatsu Akita, a JGC official in charge of the project.

As many as 15 ships, including two newly built vessels with ice-breaking capacities, are on hand to carry the modules. The ships sail from Asia to the Arctic, via the Bering Strait in summer and Suez Canal in winter.

Since the modules can be damaged when transported in rough seas, JGC officials at the fleet operations center closely monitor the weather. 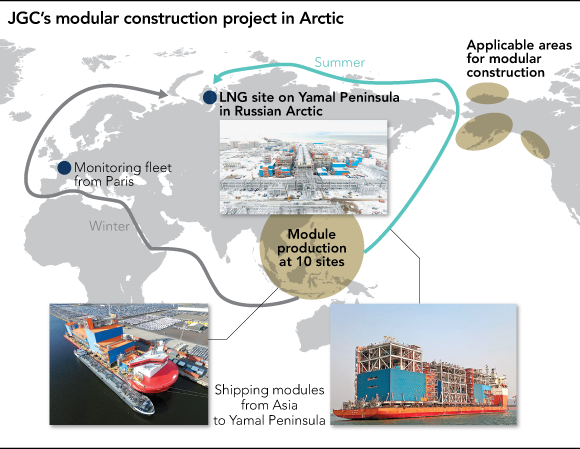 Plant engineering companies are required to have a solid knowledge of managing large projects. After Yamal, JGC is planning future undertakings under similarly tough conditions near the current site, as well as along the west cost of Canada and in Alaska.

"The experience in Yamal should help us with projects in areas where finding labor is difficult and weather conditions are severe," said Yutaka Yamazaki, senior executive vice president at JGC.

The experience gained from the Yamal project will also prove beneficial when constructing floating LNG facilities. Figuring out how to install cumbersome equipment in a limited space while calculating wave movement and size is imperative for such projects.

Additionally, the current project will help JGC design facilities that can be shipped in comparatively rougher seas.

In order to lower reliance on the oil and gas business, JGC is developing new technologies to cope with the changing business environment. The company had a backlog of orders totaling 1.1 trillion yen ($10 billion) at the end of 2016, a decrease of 180 billion yen from a year earlier.

Though lower natural resource prices have dampened global business, demand for LNG is expected to surpass supply in 2024 and 2025, thanks to surging needs in China and India.

LNG plants usually go online five years after the start of construction. Due to this, "the resumption of orders will begin around 2019," JGC President Koichi Kawana said.

But waiting for demand to rise means that JGC will still be relying on the oil and gas business. Therefore, the company is rapidly accumulating artificial intelligence and other cutting-edge technologies to create more advanced designs and streamline construction.

In February, JGC began developing an AI-based system to facilitate design work. The system should be operational within two years.

"Since each plant requires its own design, we can shorten design time by making use of past know-how," said Hideaki Miura, senior executive officer.

JGC has already started joint AI-based support services with NEC to detect the causes of malfunctions at chemical plants and oil refineries by analyzing big data. In the future, it hopes to develop the service into an AI system that can predict problems by analyzing real-time data.

The company will also begin managing construction using Bluetooth technology. Starting this July in Bahrain, integrated-circuit tags will be attached to machinery and the helmets of some 1,500 workers to monitor work progress, equipment usage and worker efficiency. Unlike recording data in daily reports, the new system will display it on a real-time basis, enabling workers and equipment to be more efficiently assigned.