Mitsubishi Heavy Industries, for instance, is suffering from an acute shortage of engineers. Signs of the problem are visible at the company's Nagasaki Shipyard & Machinery Works. As it is tries to clean up the mess left by its disastrous passenger liner business, the heavy machinery maker has had to recruit a number of engineers from Europe.

After a loss of 250 billion yen ($2.22 billion) on the construction of two large cruise ships for a U.S. client, the company last year announced its withdrawal from the business.

Japanese engineers are hard to come by these days, due partly to a proliferation of urban redevelopment projects prior to the 2020 Tokyo Olympics.

Bringing engineers over from Europe has pushed up costs, pushing the company into the red for the first time since 2004, when it started announcing quarterly earnings results. 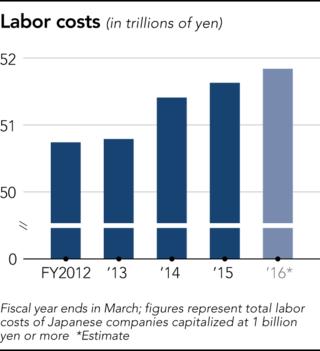 The cruise ship debacle and the struggling aircraft business combined to leave the company with a net loss of 11.2 billion yen for the April to December period.

But Mitsubishi Heavy's recruitment crunch is just one dot on a gloomy picture. The unprecedented manpower shortage poses a huge challenge for Japan's economic future.

How companies deal with the problem is a management challenge that can make or break them.

Instead of the army of uniformed workers you might expect to see at the company's Kawasaki distribution center, red box-shaped robots products whiz around sorting the products. Introducing robots has boosted work efficiency at the center more than threefold while curbing labor costs.

Nitori's response to the labor shortage is paying off. The company is expecting to report a record operating profit for the year through February for the 30th consecutive year.

Airlines are also having a hard time. Japan Airlines has decided to raise salaries to secure a sufficient number of qualified pilots. After it cut salaries following bankruptcy in 2010, the airline lost many good pilots to low-cost carriers.

To stem the outflow of human resources, JAL is increasing its labor expenditure by some 21 billion yen, mainly through salary hikes for pilots, in the current fiscal year. The higher payroll is projected to slash the company's operating profit by nearly 20%.

But the decision is seen by many analysts as a strategic move that makes sense. "Securing enough pilots will make it easier for the airline to capitalize on expected slot increases at Haneda airport," says Masaharu Hirokane, an analyst at Nomura Securities.

The manpower crisis is also creating new demands and business opportunities. Fanuc, a leading manufacturer of industrial robots, is in a good position to capitalize.

The company is ramping up capacity at its plant in Chikusei, north of the capital, to meet surging demand from manufacturers looking to automate factories.

Fanuc will raise capacity at the plant to 7,000 units per month by the end of the year from the current 5,000, according to Chairman and CEO Yoshiharu Inaba.

The bullish business outlook has prompted the company to revise up its net profit forecast for the year through March by more than 9 billion yen.

Panasonic has re-energized its household appliances business, which had been struggling to generate profits for years amid fierce price competition, by developing a new product marketing formula.

The series has contributed to a 50% pickup in the operating profit of the household appliances unit, making it the largest profit generator among the company's four major businesses in the April-December period.

Markets are looking for an average profit growth of around 10% for Japanese listed companies in the new fiscal year.

Whether Japan Inc.'s profit machine will keep humming in this era of a chronic labor shortage will depend on how it tackles the challenge.