Company's president says optimism got in the way of due diligence TOKYO -- Japan Post Holdings will cut 2,000 jobs at its struggling Australian logistics unit in an attempt to keep Toll Holdings a core of its overseas expansion.

Japan Post on Tuesday announced it will book a 400 billion yen ($3.62 billion) write-down in Toll goodwill for the fiscal year ended in March.

As a result, Japan Post falls to an annual net loss of 40 billion yen. 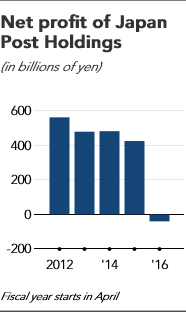 According to Japan Post, Toll's operating profit for the year dropped 74% to 69 million Australian dollars ($52 million) due to an Australian economy that is suffering from weak commodity prices. Toll's value now stands far below Japan Post's 2015 acquisition price of A$6.48 billion.

Speaking to reporters at Japan Post's Tokyo headquarters, President Masatsugu Nagato stressed that Toll remains "a core unit for Japan Post's global expansion." He said the write-down is meant to put Toll at "the starting point of aggressive management."

Nagato said that of Toll's total workforce of 40,000, 2,000 will lose their jobs. Nagato called the move necessary, saying Toll's operations had grown fat with inefficiencies as the company made more than 100 acquisitions.

The press conference was short of details about any growth strategies for Toll, with Japan Post executives simply saying the logistics company will focus more on specific regions and industries.

About the massive impairment loss, Nagato said he cannot deny the notion that Japan Post leaned too optimistic while doing its due diligence ahead of the 2015 acquisition.

He said Japan Post, faced with a domestic market that lacks growth potential, will continue looking for overseas acquisitions.