TOKYO -- Japan Tobacco will buy the rights to the Natural American Spirit cigarette brand for its business outside the U.S. from Reynolds American for about 600 billion yen ($4.94 billion). Stock market players immediately rejected the deal, which involves a purchase price that is 286 times greater than profit in the non-U.S. Natural American Spirit operations.

The addition, which Japan Tobacco calls "a new step totally different from past mergers and acquisitions," takes place amid skepticism over whether it will prove successful.

Japan Tobacco stock fell 7% on Sept. 30, the day after the deal was announced, reflecting doubts raised by investors about the hefty price the Tokyo-based company will pay to buy a business that posted a pretax profit of 2.1 billion yen on sales of 17.6 billion yen in fiscal 2014.

Japan Tobacco anticipated criticisms against the deal as "expensive," said Mitsuomi Koizumi, president and chief executive officer of the company.

In recent years, Japan Tobacco has grown via two giant deals to acquire the non-U.S. tobacco business of RJR Nabisco for 940 billion yen in 1999, and Gallaher Group of Britain for 2.25 trillion yen in 2007. As a result, the ratio of operating profit from overseas markets has soared to two-thirds of total profit at Japan Tobacco.

But the latest deal to pay 600 billion yen for a single brand immediately raised questions from analysts.

Executive Deputy President Yasushi Shingai, who spearheads Japan Tobacco's mergers and acquisitions strategy, brushed criticisms aside, saying that the deal should not be measured with "conventional rulers."

That confidence reflects the company's success in reviving acquired operations based on its financial prowess and know-how. In addition, Japan Tobacco concluded that it can accelerate growth by incorporating the Natural American Spirit business's brand, organization and corporate culture.

"Natural American Spirit is a small brand, but it has growth potential," Shingai said. "It is also entrepreneurship-minded. The purchase price is conservative."

In other words, Japan Tobacco effectively sees the acquisition as an investment in a rapidly growing venture business.

Huge investments in growth potentials are nothing new in industries such as information technology and medicine. For example, Facebook acquired WhatsApp, an American Internet-based messaging app, for $21.8 billion in 2014.

Given Pharmasset's extremely weak earning capacity, the acquisition was widely criticized as an excessive investment. But the deal has contributed to Pharmasset's strong growth and the development of Sovaldi, a drug for the treatment of chronic hepatitis C virus infection, which already chalks up $10 billion in annual sales.

Japan Tobacco has invested in a variety of venture businesses in its pharmaceutical sector. It has also developed an anti-human immunodeficiency virus drug jointly with a pharmaceutical maker, using the partner's material.

"We are entrepreneurship-minded," said a Japan Tobacco executive.

Natural American Spirit is rapidly expanding its presence in Japan. Despite a small market share of 1%, the brand sold some 1.5 billion cigarettes in 2014, 2.5 times higher than three years earlier amid a decline of around 10% in total demand for cigarettes during the period.

Natural American Spirit is made with organic tobacco that is free of aroma and preservation agents. It is priced in Japan at 480 yen per pack, higher than other cigarettes, and smoked mostly by people in their 20s and 30s.

Japan Tobacco does not measure the attractiveness of the brand with simple figures, but sees it as a product strategy to reach its target of entering the high-end market segment and attracting young people.

The company will be able to earn "a return matching the 600 billion yen" if Natural American Spirit gains a 10% share of the Japanese market, comparable with Philip Morris International's Marlboro, and books overseas sales corresponding to those in Japan, said Nobumichi Hattori, visiting professor at Waseda University's graduate school. 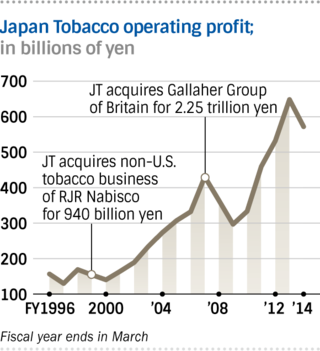 The hurdle envisioned by Hattori, who has ample M&A experience, is by no means low for Japan Tobacco. Though likened to a venture business investment, Japan Tobacco needs to be prepared for risks. In addition, the possibility of major changes in market conditions cannot be ruled out in light of toughening regulations on smoking and the decreasing number of smokers.

CEO Koizumi has set a clear target for the company these days: to become the world's No. 1 tobacco company. With this acquisition, he has taken on risk in efforts to achieve that goal.

According to Euromonitor International of Britain, Japan Tobacco sells 506.5 billion cigarettes worldwide per year. The figure is much smaller than the 829.2 billion registered by Philip Morris, the world's largest tobacco company, if Chinese companies are excluded. But it is within reach from the second-ranked British American Tobacco's 607.4 billion.

Japan Tobacco will need to justify the hefty acquisition through an increase in earnings.