Japan's Misawa bundles homes with a separate place in the sun TOKYO -- Japanese homebuilder Misawa International is linking its houses with solar power -- and not in the way consumers have come to expect.

The Tokyo-based company is selling packages that include a home along with a solar array in a remote location, set up with solar energy specialist Eco-Style.

Rather than slapping panels on the roof, the company suggests choosing a prime location that gets plenty of sun -- say, somewhere in the mountains. Misawa International says this can give homeowners stable, long-term earnings and eventually help pay off their mortgages.

The financial aspect was what drove the company to launch the program, according to President Chiyoji Misawa. 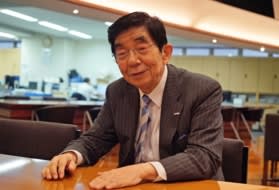 "I've been concerned that soaring housing prices have turned the dream of owning a home, which is supposed to be a source of happiness for families, into something rather painful," said Misawa, 79, who established the forerunner of Misawa Homes half a century ago.

"I have three grandchildren, and my son and his wife struggle to generate enough money for their schooling and study-abroad programs, while repaying a not-insignificant mortgage," he continued. "I have been seeking ways to reduce the financial burden without cutting construction costs, which are essential for maintaining quality."

The solar packages are being offered to buyers of Misawa International's Habita line of houses. Eco-Style helps them select land and builds the solar plants.

Eco-Style has been asking landowners across the country to sell space for solar power generation. It now has around 1,500 candidate locations; employees check the amount of solar radiation available and power infrastructure at each one.

An 85kW-class solar power facility will set you back about 20 million yen ($180,831), including construction, maintenance and the land. Eco-Style can make leasing arrangements when homebuyers cannot afford the land outright. 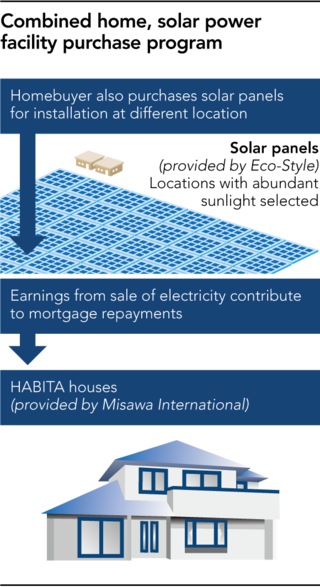 The key to the deal is Japan's feed-in tariff system, under which the government guarantees it will buy renewable power from accredited facilities at above-market rates for 20 years. For facilities with output of 10kW or more, the current rate is 22.68 yen per kilowatt.

At that price, a solar array in a sun-drenched location would bring in about 170,000 yen per month.

After the 20 years are up, Eco-Style will buy the electricity for 10 years.

Misawa International says the panels can help homebuyers chip away at their mortgages, even after the initial installation costs are factored in. Insurance against natural disasters and poor sunlight is also available.

Eco-Style set up 6,000 solar arrays in 2014 alone, but this is its first partnership with a homebuilder that involves installing remote panels. Eco-Style aims to win 1,000 package orders by March 2021.