TOKYO -- The number of Japanese companies with investor benefit programs reached a record 1,210 as of the end of March, according to consultancy Daiwa Investor Relations. The figure accounts for 33% of all listed companies in Japan. Increased earnings are giving companies more leeway to reward shareholders. 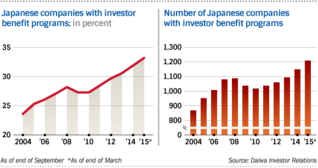 Unlike dividends and buybacks, which use company profits, shareholder benefit programs are regarded as operating activities. For this reason, such programs do not distribute "profits" to shareholders, in the strict sense of the term. Still, they are similar in that they allow companies to effectively use their capital on hand to pass on benefits to shareholders. Indeed, many companies are starting to see such activities as a third type of shareholder returns, after dividends and share buybacks.