TOKYO -- As much as 8 million tons of edible food is discarded by convenience store chains, department stores and elsewhere in Japan every year simply because it is approaching its sell-by date. Rather than letting such food go to waste, one company is turning it into healthy, low-cost pig feed. 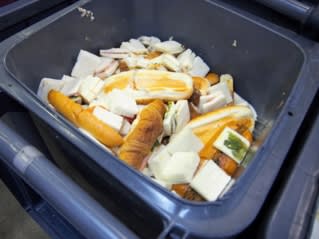 Still-edible breads and sandwiches are discarded simply because they are close to their expiration date.

Japan Food Ecology Center's food-recycling plant in Sagamihara, Kanagawa Prefecture, receives up to 32 tons of food waste a day from about 180 operators. This includes unsold or close-to-date prepared food from department stores and convenience store chains, as well as waste from food-processing plants.

President Koichi Takahashi said most of the food waste brought to his company is still edible. The containers don't emit any foul odors, and there are no flies buzzing around. "Pigs are like human beings," he said. "They don't eat rotten or moldy food."

Municipalities usually charge about 40-50 yen (33 - 42 cents) per kilogram to incinerate food waste generated by stores and factories. Japan Food Ecology Center is attracting attention because it handles food waste at about half the cost, according to Takahashi. The company can process waste the same day it is received and ship it as feed the next day.

After being weighed, containers filled with food waste are sent along a conveyor belt where experienced workers quickly remove any plastic packaging and paper napkins by hand. Strong magnets at the end of the conveyor belt remove staples and other bits of metals automatically.

Most of the waste is carbohydrates, such as bread, noodles and rice, which is better for pigs' health than it might seem. "Just like human beings, 70% of the energy pigs require comes from carbohydrates," Takahashi said. "It is enough if 10% comes from vegetables." Carbohydrates are an important component of quality feed, and bread-and noodle-based waste actually trades at cheaper rates than vegetable-based ones.

To kill E. coli and salmonella, the finely chopped waste is put into a heat exchanger and sterilized at temperature of 80-90 C for a few minutes. Liquid feed fermented with lactic acid bacteria is ready in about half a day or a day.

The liquid feed is delivered to 15 small and midsize contract farmers in the eastern region of Japan. The yellowish, sour-smelling liquid is quite different from powdered livestock feed made from corn and other ingredients. Such dry feed was imported to Japan and widely used after World War II in accordance with U.S. policy, but liquid feed is more popular in Europe. 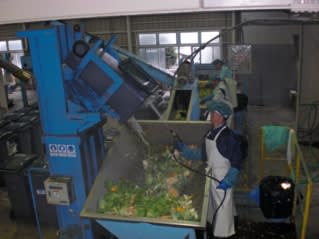 Making dry feed is expensive, as it requires a long periods of high heat. Fermented liquid feed, by comparison, requires much lower temperatures and shorter heating times. "We can provide fermented liquid feed at about half the price of dry feed," Takahashi said.

Another advantage of fermented liquid feed is that it can be easily customized to meet the nutritional requirements of each pig. For example, growing pigs that need more protein are given feed containing such ingredients as soybeans and fish.

Japan Food Ecology Center keeps various nutrients on hand at its plant, such as calcium lactate and lysine, a kind of amino acid. "People want to have somen (thin noodles usually served cold) in the summer. It's the same for pigs. They eat more feed if it is liquid," Takahashi said.

Lactic acid from milk and yogurt helps increase beneficial gut bacteria, improves immunity and regulates the functions of the intestines. According to Takahashi, the benefits of this type of feed are twofold. "Fermented liquid feed is not only produced from food waste, it is also good for pigs' health."

Pigs raised on such feed are processed into high-quality pork and sold in department stores and supermarkets under the brand names Yuton, meaning "superior pork," and Umakabuta, "delicious, flavorful pork."

From Milan to the world

The Ministry of Agriculture, Forestry and Fisheries estimates that Japan's food loss -- the amount of still-edible food thrown out before being consumed -- was between 5 million and 8 million tons in fiscal 2011. The country's total food waste, including food loss, was 17.28 million tons, nearly 80% of which was incinerated or discarded in landfills. It costs about 40,000 yen for municipalities to incinerate a ton of waste, and part of the cost is financed by taxpayers' money.

Japan Food Ecology Center's recycling system will be on display at the Japanese pavilion in this year's World Expo, to be held in Milano, Italy. Takahashi expects to be able to export his company's technology before long. European countries, which have been refraining from recycling food waste into feed because of bovine spongiform encephalopathy fears, "are beginning to look to feed recycling," he said.

Japan's food self-sufficiency ratio is about 40%, meaning the country depends on imports for 60% of its food supply. At the same time, one in every nine people in the world is facing starvation. Because wealthy countries import food produced in poorer countries to use as livestock feed, promoting food recycling could help alleviate global food shortages.