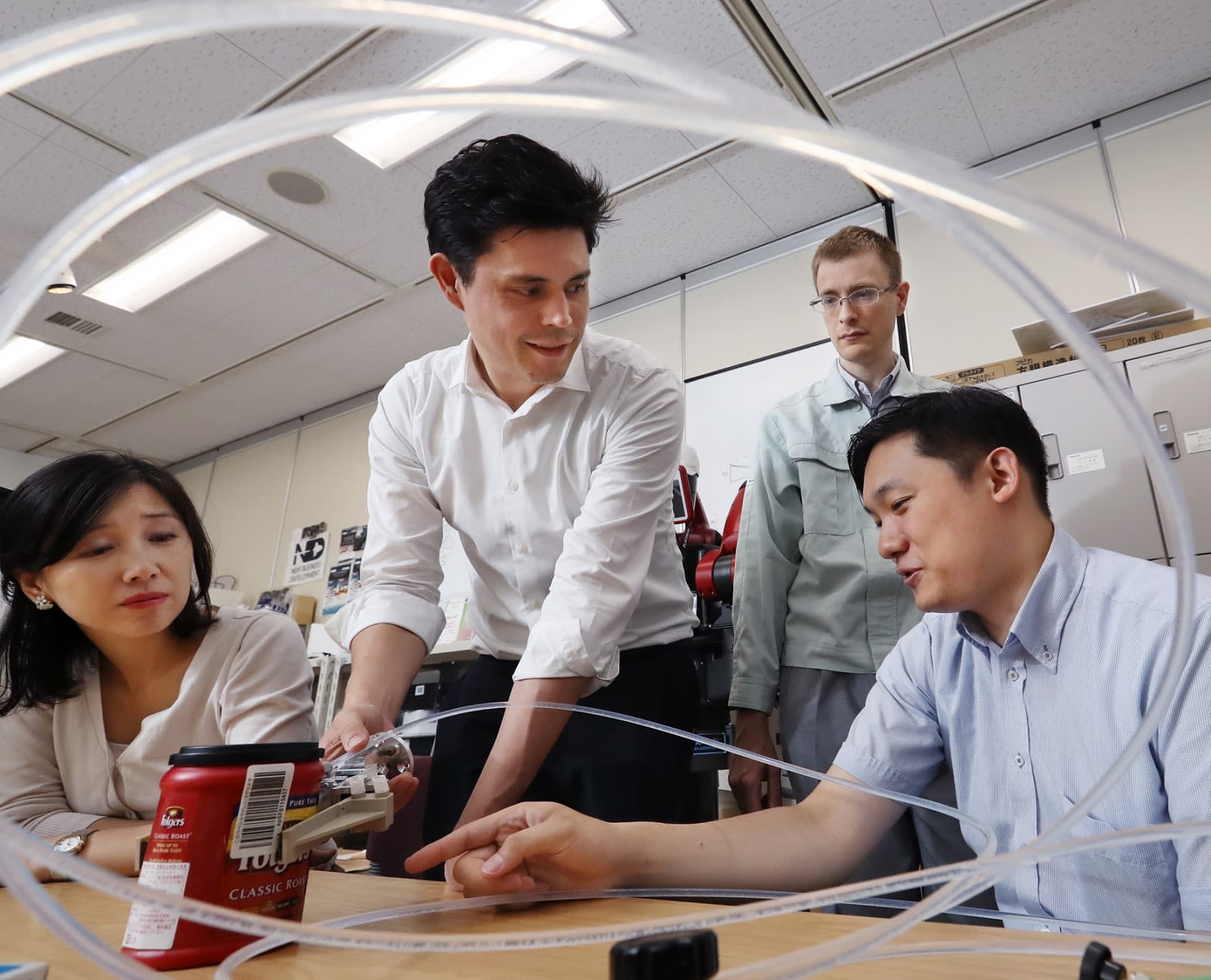 Yang Pin-chu, right, a Taiwanese researcher at Panasonic, said the opportunity to do research into Ai and robotics is the sole reason he works for the company.
July 22, 2017 15:00 JST | China
CopyCopied

TOKYO -- Foreign workers in Japan now total more than 1 million, and they form an indispensable part of the country's labor force. The government and business see them as not just a workforce to compensate for worker shortages, but as a force to revitalize the economy. Expectations are especially high for foreign workers with specialized knowledge or skills.

Chinese Lu Yaxi used to work for a Japanese company. In June, however, she jumped ship and joined a non-Japanese company, while still remaining in Japan.

"I wanted to try working for both [Japanese and non-Japanese employers] to judge what is best for my future career," the 27-year-old said. "Most of my friends who came to Japan with me to find jobs here have gone back home. Everybody was complaining about slow promotion in Japan."

Another Chinese individual, who asked not to be named, also made a job shift from a Japanese precision instruments maker to a Chinese company operating in Japan. He said the low pay at his former employer made him make the decision.

"I'm earning 50% to 100% more now," the 28-year-old said. "The promotion examination [at the previous employer] was given in Japanese, so foreigners were at disadvantage."

According to an industry ministry survey on foreign workers at large Japanese businesses, about 40% of the respondents want Japanese companies to more clearly show career paths for them and shorten the intervals between promotions and pay raises.

One survey shows that compensation for directors' level or higher positions at companies in other Asian countries is higher than at their Japanese counterparts.

Globally, information technology talent is becoming hard to come by, and competition between businesses to attract such workers intensifying. As more people seek to build careers by looking for better opportunities at different companies, Asian companies are increasingly shortening the intervals between promotions and pay raises.

By contrast, Japanese companies have traditionally treasured equitability, which may negatively impact their efforts to hire foreign nationals.

Taiwanese researcher Yang Pin-chu's intense focus on building his career may also be something Japanese companies are not familiar with. The 27-year-old employee at Panasonic said he joined the company solely because he thought he would be able to do the research he wanted to do for his career, and he was clear about this.

"I'll leave this job as soon as it becomes impossible to pursue the research I want to do," he said.

Yang specializes in technology to bring together artificial intelligence and robots. He leads research at a division dedicated specifically to this area, which was launched in April. Luckily for Panasonic, the company has the environment to keep him.

If many foreign workers in Japan are characterized as mobile, Wang Min is a notable exception. The 42-year-old Chinese has worked for NTT Data for many years, and he has been promoted to section chief in the data center and cloud services department -- as have his Japanese colleagues who are climbing the corporate ladder within the same company.

He is now a go-to consultant for many younger foreign workers concerned about their career path in the company, where 5% of the 400 or so new-graduate hires per year are foreign nationals.