TOKYO -- New luxury train tours have proven a hit in Japan among travelers who can afford them, selling out nearly a year in advance. But heavy upfront outlays mean railways have many a trip to make before these prize businesses will turn a profit.

Since East Japan Railway's Train Suite Shiki-Shima, an opulent sleeper, first rolled out of Tokyo on May 1, more than 1,500 passengers are estimated to have ridden, paying as much as 950,000 yen ($8,300) for the privilege. Trains leave twice a week and carry up to 34 passengers. A four-day, three-night trip through Japan's northeast and the island of Hokkaido, complete with sightseeing stops along the way, has proven particularly popular among older travelers for the convenience it offers.

Luxury train travel seems to have become a habit for some wealthy sightseers: Many who have ridden the Shiki-Shima have also toured around Japan's southern island of Kyushu on Kyushu Railway's Seven Stars service. There is plenty to attract the uninitiated as well, including French cuisine prepared on board. Seats on the Shiki-Shima are booked up through the end of June 2018. 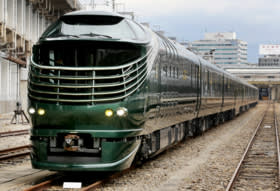 Luxury trains are appearing all over Japan. Tokyu's Royal Express made its first run in July, offering one- or two-way trips between Yokohama and the Izu Peninsula with an optional overnight stay at a local resort. Reservations often must be obtained by lottery, with as many as 20 applicants vying for each spot. West Japan Railway's new luxury sleeper, the Twilight Express Mizukaze, pulled out of the station in June.

Overall train ridership in Japan has plateaued as the population declines, and there are fewer opportunities for new real estate development along train lines, another major earner for railways. Cultivating demand for luxury travel could help them reinvigorate core operations. Money-losing local lines and other aspects of Japan's small-town economies could also benefit from the influx of tourism when riders alight.

But it could be a long while before these new services pay off. JR East, the main railway operator in eastern Japan, is said to have invested some 10 billion yen in the Shiki-Shima service, with little yet to show for it in the way of profit. Other railways have run into similar challenges.

JR Kyushu, which entered the luxury travel market in 2013, has taken steps to enhance profitability. Fares on the Seven Stars service have been hiked five times since it began in 2013, with little apparent impact on the train's popularity -- there are still around 20 lottery applicants for each available seat. Premium travel packages combining a ride on the train with stays at popular Japanese-style ryokan inns, as well as online merchandise sales, have brought in additional revenue.

JR East is eyeing similar additions, including English-language service to attract foreign tourists beginning next year. The railway also is looking at selling regional specialties and other goods to travelers on board.