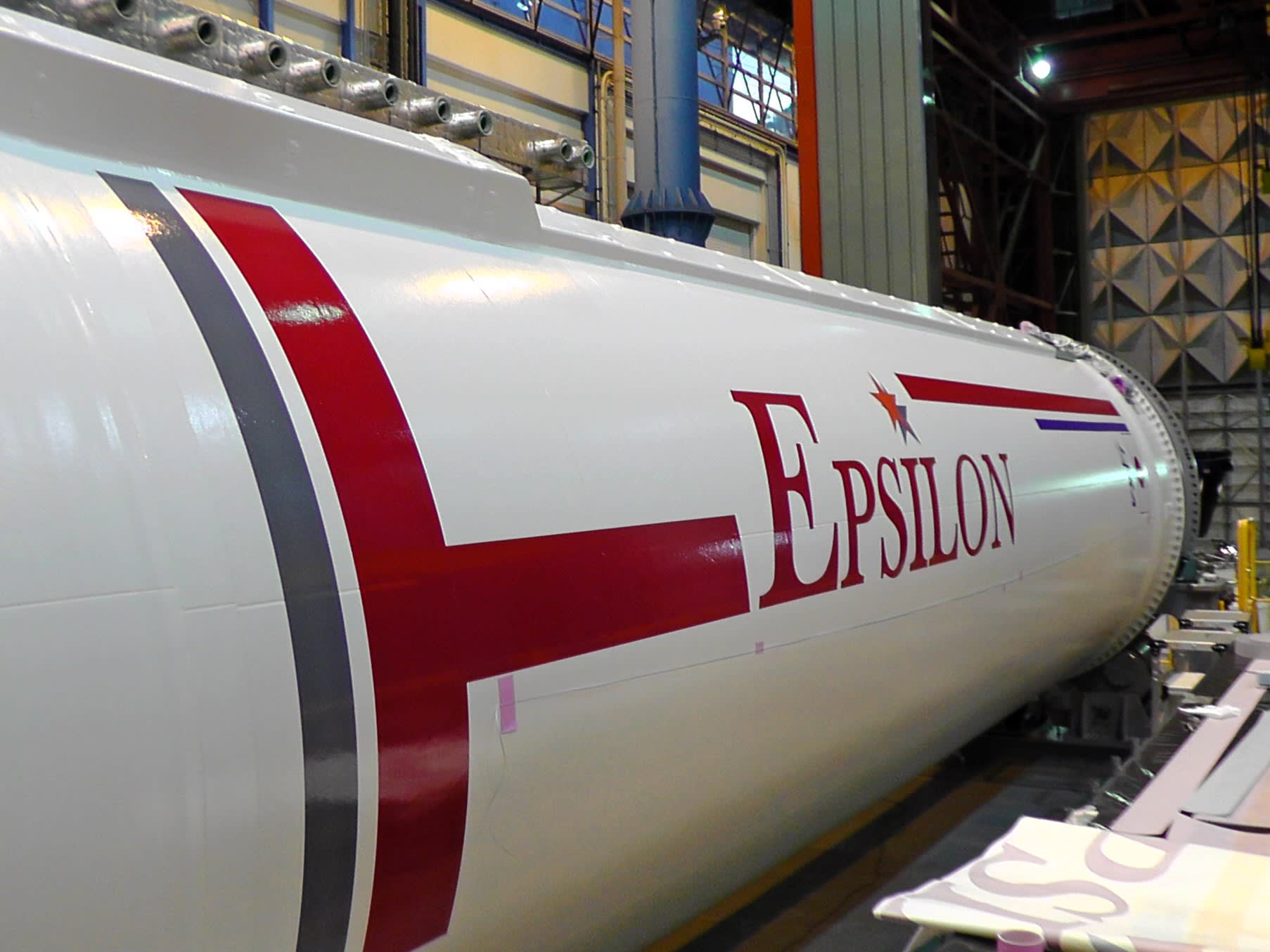 The second of the Epsilon series of rockets waits to be assembled at a launch site. (Courtesy of the Japan Aerospace Exploration Agency)
January 10, 2017 18:30 JST | Japan
CopyCopied

TOKYO -- Rocket development in Japan is getting lighter and leaner as more startups and private businesses enter the field. The industry, once dominated by government demand for large rockets, has seen an uptick in smaller, privately developed vehicles, with a number of projects now approaching the test-flight stage. Successful launches, as well as cost-cutting efforts, could put Japan's aerospace industry on track for commercial competitiveness.

The Japan Aerospace Exploration Agency, or JAXA, plans to launch the third of its Epsilon series of rockets into space as early as this spring. The space agency and a subsidiary of heavy machinery maker IHI jointly developed the small solid-fuel rocket at a cost of some 20 billion yen ($173 million). The second generation of the Epsilon family was successfully launched in December.

The third-generation Epsilon employs an additional engine system called a post-boost stage, which uses liquid fuel. This allows for better control of fuel combustion and makes it possible to precisely adjust the positioning of the vehicle until the last moments before the satellite it is carrying is put into the orbit.

The upcoming launch will carry an Earth exploration satellite into space. If successful, the space agency will have both a standard version -- the Epsilon-2 -- and an enhanced version of the launch vehicles at its disposal. The Japanese government plans to launch a total 10 Epsilon rockets of both types during the coming decade.

JAXA also plans to launch the fourth iteration of its SS-520 mini rocket from the Uchinoura Space Center in Kagoshima Prefecture, southwestern Japan, on Wednesday. If successful, it will be the world's smallest launch vehicle -- less than 10 meters long -- capable of sending a microsatellite into space. 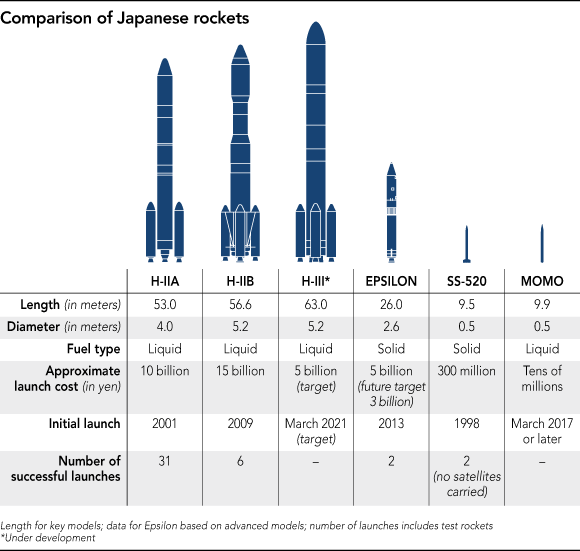 Previous SS-520 models were launched for sounding missions. Canon, via a group unit, supplied parts for the attitude control system for the new rocket. The Japanese manufacturer is confident that its lightweight electronic components will play a major role in the SS-520's maiden satellite-carrying mission. This is Canon's first involvement in the space business, and a successful launch could encourage more businesses to follow suit.

Meanwhile, Interstellar Technologies is preparing to send the first rocket developed solely by a Japanese private enterprise into outer space, possibly in March. The goal of the startup, based in the northernmost Japanese prefecture of Hokkaido, is to have its mini rocket reach an altitude of 100km. Momo, as the rocket is called, is about the same size as the SS-520 but will be launched more cheaply -- at a cost of tens of millions of yen -- thanks to less-expensive fuels, namely ethanol and liquid oxygen.

As for large-size rockets, JAXA and Mitsubishi Heavy Industries are developing the H-III, the successor of H-IIA and H-IIB vehicles. The first H-III rocket is scheduled to depart for space by March 2021. Testing of supplementary boosters will start in the year through March 2018. Developers will seek to cut costs by sharing the same parts and production process with the Epsilon family. They also plan to develop launch sites and other ground facilities.

To be competitive in the global market, Japanese rocket developers need to achieve reliability at a low cost. To gain a foothold in the Western-dominated market, JAXA and Mitsubishi Heavy are aiming to cut costs to half those of the H-IIA series.

The history of space development in Japan began in 1955, when Hideo Itokawa succeeded in launching 23cm-long rockets into the air. Since then, the government has helped the development of solid-propellant rockets, which was then led to the launch of the Epsilon series. In 1970, mimicking the U.S., Japan began developing liquid-propelled rockets. This paved the way for the development of the H-IIA and other launch vehicles.

In the U.S., on the other hand, NASA has already withdrawn from the development of satellite-launch vehicles and let the private sector take initiative. Currently available vehicles, mainly powered by liquid fuels, include the large Delta IV, manufactured by United Launch Alliance, and SpaceX's midsize Falcon 9. Orbital ATK's Minotaur family of small and midsize solid-fuel rockets, are also available.