Lack of infrastructure and battery-sapping gridlock hinder jump to electric BANGKOK -- As the automotive world pushes hard toward an all-electric vehicle future, Japanese makers and their treasured hybrids may have found an alternate route -- one that takes them straight into the daily traffic jams and sweltering heat of Southeast Asia.

While such conditions tend to drain the batteries of electric cars, they are not nearly so hard on hybrids. That is encouraging the big Japanese makers, like Toyota Motor, Honda Motor and others, who plan to take up incentives offered by the Thai government to hybrid vehicle makers to add manufacturing capacity in the country, known as "the Detroit of Southeast Asia."

Toyota, the nation's top-selling automaker, plans to build a hybrid version of its C-HR compact sport utility vehicle. An announcement is expected Wednesday at a media preview of the Thailand International Motor Expo in Bangkok.

The growing popularity of sport utility vehicles, even in emerging markets, prompted Toyota to opt for the C-HR over other models in its wide range of hybrids. It once built the Prius in Thailand, but stopped in response to poor sales. Toyota's lineup also includes the hybrid version of the Camry midsize sedan, still made in Thailand. But only 1,550 were sold in the country last year.

It's cash for flash in Thailand's Auto market

Toyota has submitted a medium-term plan to the government calling for annual Thai production of 70,000 hybrids, about 10% of the automaker's current capacity. The aim is to use Thailand as a base to advance hybrid sales in neighboring countries such as Indonesia, the region's largest market.

Honda is in talks with the Thai government to begin manufacturing hybrids in the country. Leading candidates include the Jazz hatchback, the HR-V SUV and the City sedan. The third-largest player in the Thai auto market is expected to make a final decision by the end of December.

Nissan Motor is considering selling the Note compact, equipped with its e-Power system, which powers the car with just the motor, using a gasoline engine solely to charge the battery. Mazda Motor will roll out its locally produced hybrid vehicle as early as 2019.

The push toward hybrids owes much to government policies set out in early 2016 to promote electrified vehicles. Measures include incentives for factory investment and tax breaks to stimulate demand. Thailand taxes conventional combustion-engine vehicles at 12-40%. But a program implemented this year cuts the rate to 2% for fully electric vehicles, and to 4-13% for hybrids and plug-in hybrids. A 5-percentage point tax cut saves buyers $1,000 or more on a car in the $20,000-$30,000 range, a level accessible to the middle class.

Nissan is transferring technology to Thailand in the hopes of facilitating a transition to electric vehicles, a field where the company is a step ahead of its Japanese peers.

Electrified vehicles, including all-electric cars and hybrids, reportedly account for just 0.5% of Thailand's roughly 15 million vehicles. Interest in such models, which tend to be pricier, has centered on the well-off, giving German luxury brands an edge. Mercedes-Benz and BMW have expanded their Thai plug-in hybrid lineups over the last two years. 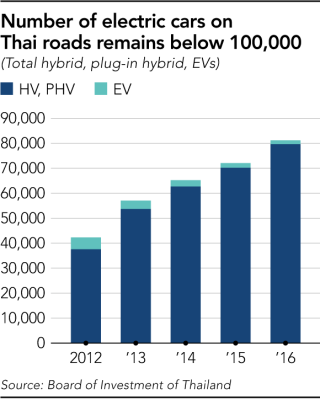 But with Japanese automakers -- which dominate the Thai market with a combined share in the 80% range -- getting in on the act, hybrids are expected to gain traction in a region where they have gotten off to a slow start.

With Europe and China looking to make the jump to electric, Japanese automakers seem behind the times with their focus on hybrids in Southeast Asia. But several factors make the region less than promising for fully electric cars.

A lack of supporting infrastructure is one hurdle. Even Thailand has only a handful of charging stations, and these are little-used. Although the government is pushing to add more, the electricity supply itself may not be able to keep pace.

For consumers, battery capacity is also a concern. Chronic gridlock in Southeast Asian cities means traveling several kilometers often takes more than an hour. Air conditioning tends to be left running to cope with the year-round heat. Automakers will need to allay drivers' fears of their cars running out of juice midtrip.

Nor should the central role of Japanese players in Southeast Asia's auto industry be overlooked. Bold changes can be tempting in Europe, which seeks to pivot away from diesel, and in China, where domestic automakers are behind the curve in conventional cars. But the more realistic approach favored by Japanese automakers may be a better fit for Southeast Asia.