BANGKOK -- While South Korean clothing brands have significant influence on Thai fashions, Japanese name-brand handbags appear to be hot here as well, from Issey Miyake's geometric-patterned totes to more affordable, functional bags. And a growing number of travelers to Japan are discovering the joys of Japanese bags.

On a recent June day, Panicha Boujoon was visiting an Anello bag shop in the capital to buy something for a friend living overseas. "I've already got four of them in different colors," the local resident in her 40s said. She likes the Japanese brand's wide variety of colors and designs. She also bought more for herself and left the shop smiling.

One of Anello's flagship stores in the capital, located in a Central Plaza complex, often sees more than 100 visitors a day on the weekends. The brand's signature wide-mouth zip opening bag with the price tag of 1,990 baht ($58.62) is the hottest seller. "It would cost at least twice that at Cath Kidston," a British casual brand, the woman said. 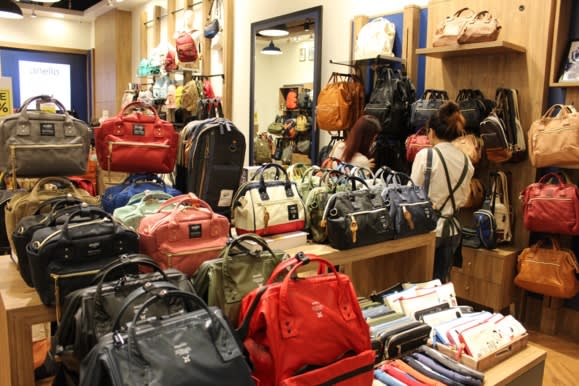 A wide-opening month and a variety of sizes and colors made Anello bags popular in Bangkok.

"At first, we didn't get why people wanted to buy the rather ordinary bags," said Tamtawan Chamchumrus, marketing manager of Minor. "But as I used it, I found that the wide-opening month is quite convenient, and there are a variety of sizes and colors." He added, "The best feature, however, is the price."

Minor in October of last year concluded a dealership agreement with Carrot Co. the Japanese operator of the brand, and has been selling the bag in Bangkok shopping centers and elsewhere. The business has so far sold more Anello bags than it had expected, and raised this year's sales forecast to 400 million baht from 350 million baht. It plans to increase the number of shops to 110 across the country.

The collaboration has also prompted a lineup exclusively for Thailand -- waterproof bags for rainy season sell well, according to the brand.

However, as is often the case with expensive brand products -- Bao Bao bags typically cost around $500 -- the majority of the brand's bags found in Thailand are fakes. Street stalls sell a range of Bao Bao imitations.

That situation prompted the Japanese brand to take action. When the Japan External Trade Organization in June held a seminar for spotting fake brand products in the town of Mukdahan near the border with Laos, the brand's representative offered tips to distinguish fakes from genuine Bao Bao products to local customs and police officers.

According to the Japan National Tourism Organization, some 900,000 people from Thailand arrived in Japan during last year, up 13% on the year. These travelers will likely find more Japanese products that match the tastes of Thai locals and help to spread them across the country.