Others, too, see potential in country of 50 million On Dec. 29, Honda Motor opened its 115th motorcycle dealership in the country, in Myitkyina, the capital of the state of Kachin. The Japanese company opened five dealerships in Myanmar in December alone -- all in smaller cities. The total number was up 40% from a year earlier.

"There is still room to open dealers in smaller cities," said Shinichi Noyori, head of Honda's Myanmar office. "We could expand our dealer network to 150 almost right away."

Honda entered Myanmar's motorcycle market in 2012, mainly selling minibikes like the Wave and Click with engine displacements of 100-125cc.

This despite the fact that Yangon, the country's largest city, bans motorcycles due to traffic congestion. A Honda dealer in Bago

Honda's rapid growth owes mostly to its ability to quickly put together a nationwide dealership network.

Another factor is consumers are putting more emphasis on quality.

A Honda dealership that opened in Bago in 2014 is surrounded by more than 10 Chinese motorbike dealers. If 10 sounds like a lot of Chinese brands, it's not. Some 50 Chinese brands are in Myanmar and eat up 90% of the pie.

Honda's Wave motorcycles start at around 1.1 million kyat (about $810), while higher-end Clicks go for around 2 million kyat.

Yet, Honda's sturdier and safer two-wheelers are gaining popularity in Myanmar. In Bago, Honda has managed to take 40-50% of the market for itself, according to a local agent. That figure, however, also includes unauthorized imports from Thailand.

A 40-year-old man who bought a Honda motorcycle last year, said he would not choose Chinese bikes because Honda dealers offer excellent service.

Myanmar's per capita gross domestic product is around $1,300 -- among the lowest in the region, alongside Laos, and far below the $3,000 threshold at which rapid motorization is said to be triggered.

However, "consumers along Myanmar's borders, many of whom often work in neighboring countries, have more purchasing power than one might expect," Noyori said. 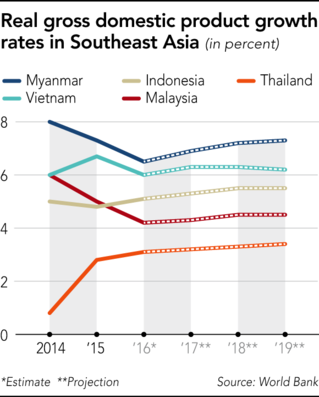 The World Bank expects the country's economy to grow at a more than 7% clip in 2018 and beyond, which would make it Southeast Asia's fastest-growing. Last year, Ogilvy & Mather made Myanmar one of its 12 "velocity" markets that the U.S. ad agency says will be key to middle-class consumer growth over the next decade.

There is also a sign that the country's new car market -- which currently musters sales of 6,000 or so a year -- is coming to life. Toyota Motor, which ventured into the country in 2014, sold about 400 cars in 2015. The number was squelched by all the cheap used cars available, most of which carry Japanese nameplates.

Since autumn, however, the automaker has managed impressive sales during shows it puts on at commercial complexes -- more than 100 cars in two days in one case.

Meanwhile, a growing number of Japanese food companies are looking at the Myanmar consumer's preference for quality and deciding to give the market a try.

On Dec. 16, students at the University of Yangon participated in a sampling party hosted by Acecook, a Japanese instant noodle maker that ventured into the country in 2014.

Myanmar's instant noodle market is dominated by Thai brands, which have been in the country since the 1990s. As a result, Thai flavors -- like spicy and sour tom yum soup -- dominate.

Acecook's flagship Hana product, however, is made up of chewy noodles and a chicken-flavored sauce -- a Myanmar food-stall favorite.

The noodles go for 600 kyat, three times the price of many Thai instant noodle products.

Acecook has developed other flavors specific to Myanmar, too.

In addition, it has other Southeast Asia experience it can draw on. In 2000, it launched Hao Hao noodles in Vietnam, which went on to become a mega hit and now constitute a significant portion of the market.

Akira Hirano, managing director of Acecook Myanmar, expects Myanmar consumers to become pickier about what they eat as their economy grows. The company plans to start making its noodles in Myanmar after spring, with expectations of grabbing 10% of the market by 2020.

The middle class wave is also picking up and giving a ride to more Myanmar companies. In December, property developer First Myanmar Investment Group held a framework-raising ceremony for a 28-story condominium, Galaxy Towers, in Star City, a large residential area on the outskirts of Yangon.

The condos start at $100,000 per unit. They are meant for Myanmar people who have already found success in the growing economy. An FMI-developed condo tower in Star City, on the outskirts of Yangon

FMI, which started building Star City in 2011, has already sold about 2,000 units there, most of them in high-rise condominiums. Construction of Galaxy Towers, the third phase of Star City, is expected to be completed in 2018 or later. Then, another 1,000 or so units can be moved into.

FMI is a conglomerate that seeks out opportunities in the country's growing middle class. It has housing, aircraft, hospital and internet banking operations. FMI saw its profit jump 51.9% on the year in the April-September period of 2016 -- a strong performance that in turn is underpinning Myanmar's growing consumer market.

Despite a population of 50 million and rich deposits of natural resources, Myanmar was long held back by a series of corrupt military governments. Now, however, taking in a whiff of democracy, companies from around the world are pinning their hopes on the potential of the country's consumer market.