TOKYO -- JFE Engineering is looking to tap growing demand for bridges, ports and other steel structures in emerging Asian markets. The Japanese company is eager to diversify its revenue streams, as its home market is expected to remain stagnant in the mid- to long term.

In Yangon, Myanmar, JFE Engineering recently won two orders for steel structures. One of the contracts, for an overpass, is worth about 600 million yen ($4.96 million). The company has already started building the bridge, which is aimed at easing traffic congestion in the rapidly growing city, and construction is scheduled to be completed in September.

JFE Engineering manufactures large steel parts and transports them to the construction site for installation. The company says this method will likely be a few months faster than building a concrete bridge. 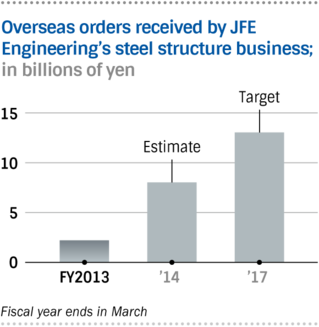 The second contract, worth approximately 300 million yen, is for construction of a pier facility on the Yangon River. The project involves revamping an aging ferry terminal and is to be completed in June.

J&M Steel Solutions, a joint venture for infrastructure construction between JFE Engineering and Myanmar's Ministry of Construction, is in charge of manufacturing the steel parts for both projects. J&M Steel is seeking more infrastructure-related deals in Myanmar and is considering beefing up its workforce of just over 200 employees.

In India, JFE Engineering has won a contract for bridge maintenance and repair in partnership with a Japanese consulting firm and other companies. JFE Engineering will survey how much damage has been done to a bridge built in the 1980s in eastern India, study options for repairing it and then draw up an estimate of the cost. The company has also received an order for building railway bridges in India, and it is looking to cultivate further demand in South Asia, including Bangladesh and Sri Lanka.

JFE Engineering expects to earn a total of 8 billion yen from overseas orders in its steel structure business, which includes bridges and construction parts for port facilities, for the fiscal year through next March. The company aims to raise this amount by 60% to 13 billion yen by fiscal 2017.