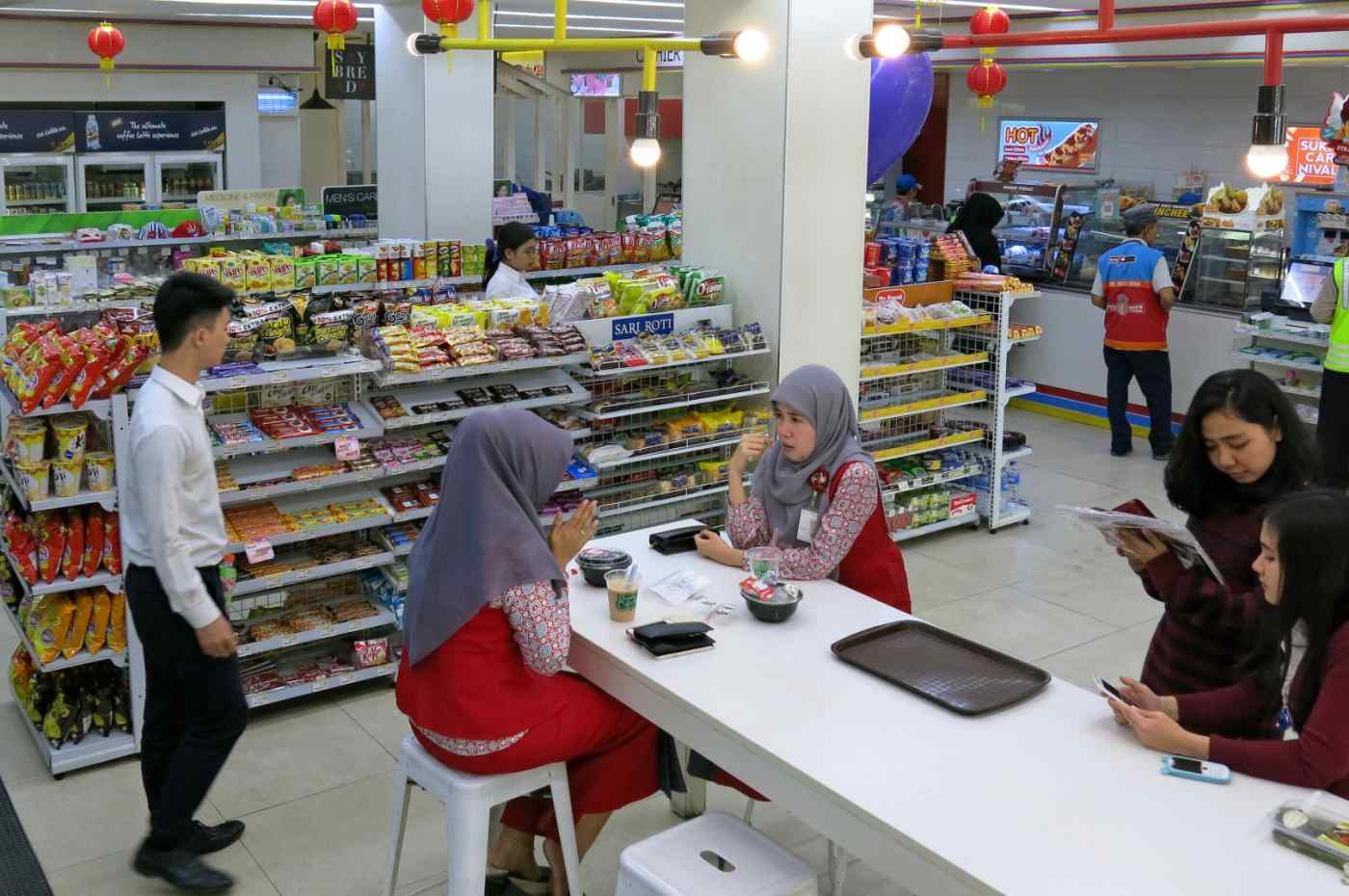 JAKARTA/TOKYO -- Dominant local players, government regulation and flawed expectations have prevented Japanese convenience stores from flourishing in Indonesia since they entered the market in 2009.

Salim Group's Indomaret and Alfamart, run by Sumber Alfaria Trijaya, both have doubled their number of stores in the past five years and operate over 10,000 outlets each. Meanwhile, Lawson has just half as many stores as during its peak, while Seven & i Holdings' 7-Eleven and FamilyMart also struggle to expand.

Local chains can design stores and inventories that better cater to a specific audience. They might open smaller shops that focus on items like powdered milk and diapers in low-income neighborhoods, while running larger stores with a variety of prepackaged meals and desserts in urban areas.

Boxed lunches from Washoku Sato, a Japanese-restaurant chain, line the well-lit aisles of an Indomaret at a business district in the heart of Jakarta. Piping hot oden hot pots and hot dogs are next to the cash registers, right by a colorful Mister Donut display.

"Both chains are convenient. I pick one based on how I'm feeling that day," said a restaurant worker outside an Alfamart in Jakarta. She said she has never been to the nearby FamilyMart.

Having a 10,000-store network also makes the two local giants more attractive as trade partners. Sato Restaurant Systems, which operates Washoku Sato, and Mister Donut owner Duskin both chose to work with Indomaret over their compatriots.

Japanese chains also are hindered by government restrictions on foreign capital. Companies abroad generally are prohibited from investing in retail locations that are 400 sq. meters or smaller in order to protect small business owners. This means the Japanese companies must sign over local operations to an Indonesian partner through a licensing agreement.

But the local companies don't always act as quickly as the head office in Japan wants. For example, Lawson operator Midi Utama Indonesia is accelerating the expansion of its own Alfamidi minimarts. The number of these stores jumped by a whopping 70% between 2013 and 2015 to 1,023, while investment in the Lawson chain seems to have taken a back seat.

Some also say that Japanese companies are falling behind because they take compliance too seriously. President Joko Widodo once stopped issuing all new retail permits for large businesses, including domestic players, during his tenure as governor of Jakarta.

"Leading convenience store chains have locations operating without permits here and there," a source at Indonesia's Trade Ministry said.

"In the interest of compliance, we are distancing ourselves from any extreme race to open new stores," said an executive at a leading Japanese chain.

One distinguishing feature of Japanese convenience stores is their variety of freshly made foods. They also installed cooking facilities at their Indonesian locations to prepare hot pots and skewered chicken. Then, mimicking the local food carts, they created large in-store spaces where customers could consume the products.

But "customers just buy drinks that cost less than 100 yen (89 cents) and hang around for a long time," a source at a Japanese chain said. "The number of people who buy meals to eat at home also fell short of expectations."

The two domestic giants recently began adopting similar features at larger urban locations, but most of their stores are much simpler. Local partners are reluctant to invest in Japanese convenience stores that cost more to open but are not as successful. Supra Boga Lestari unwound its entire stake in the Ministop chain at the end of last year after failing to improve earnings.

But some Japanese convenience stores have a better outlook. Wings Group, the operator of FamilyMart stores in Indonesia, acquired local second-tier chain Starmart. Fifty of the roughly 80 Starmart locations will be converted into FamilyMarts. Japanese players in Indonesia must seek a path to survival, such as through opening smaller stores in commercial buildings.