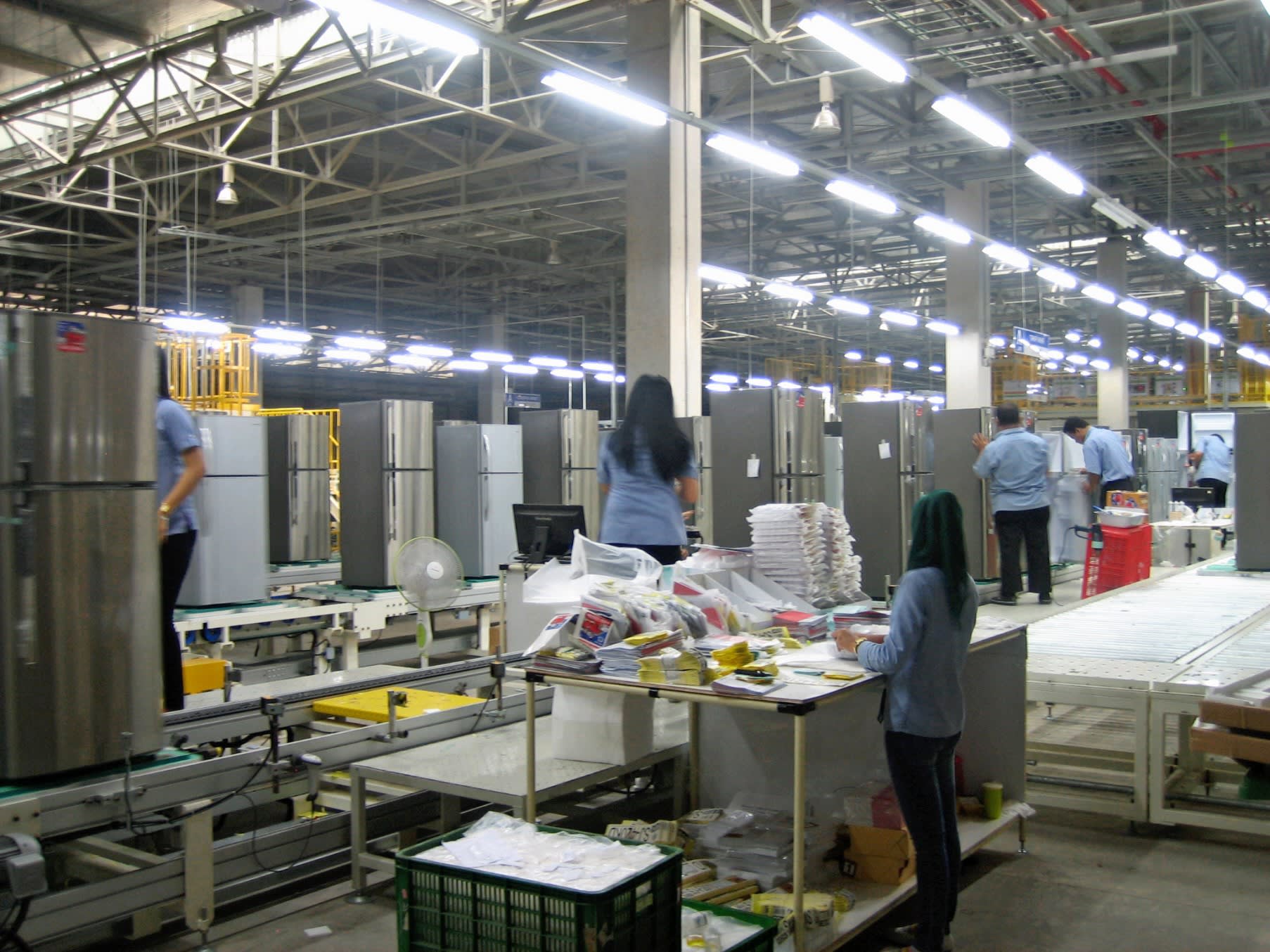 The yen's weakening has hurt the profitability of Sharp's home appliance business, which depends on imports from overseas plants like this one in Indonesia.
KOICHI KITANISHI, Nikkei staff writerJanuary 20, 2015 19:00 JST | Japan
CopyCopied

Sharp, which is forecasting a net loss for the year through March, plans to slash fixed costs by around 4.5 billion yen ($38 million) through cuts in overtime and other steps. In light of the company's troubles, its labor union has decided against demanding an increase in base pay during this spring's wage negotiations. Despite efforts by labor and management to lift the sagging bottom line, however, Sharp faces a bleak earnings outlook, with its key liquid crystal display business failing to offset losses in TVs and other troubled operations. Sharp on Monday said its earnings for fiscal 2014 will fall short of its earlier forecast announced Oct. 31 of last year, when it predicted a net profit of 30 billion yen for the year. Now it is now bracing for a loss of tens of billions of yen.

The belt-tightening alone will not make up for the losses, but the company hopes the effort will at least demonstrate its determination to improve earnings. To ensure support from its major creditor banks, Sharp will cobble together a package of more radical measures to turn itself around by spring.

The manufacturer will start by cutting overtime, a step which does not require negotiations with the labor union. This should shave around 2 billion yen from its annual wage bill, according to Sharp's estimate. It also plans to trim other types of compensation such as commutation and per diem allowances, after striking deals with the labor union. These measures will take effect in April. The company is also considering ending the re-employment of temporary workers and introducing a work-at-home system.

For the past two years, Sharp's labor union, alarmed by the company's dismal showing, decided not to join its counterparts at other electronics makers in pushing for higher wages in this year's spring labor offensive.

Sharp posted a net profit of 11.5 billion yen for the year that ended in March 2014, after losing money for two straight years due to huge restructuring costs. It is having trouble on the revenue side as well, with sales expected to fall below its original forecast of 2.9 trillion yen.

When the company announced Oct. 31 its results for the half year through September 2014, it left its profit outlook unchanged. At that time, Sharp's mainstay businesses were generally in good shape, except for the electronic parts unit. But the environment began to deteriorate after the Bank of Japan expanded its monetary easing program and pushed the yen lower.

Initially, Sharp President Kozo Takahashi was optimistic about the effect of a weaker yen on earnings, saying the negative effects would be offset by the benefits. But as the Japanese currency continued to slide, Sharp's home appliance business, which depends heavily on imports from overseas plants, suffered. Sharp's solar panel business has also taken a hit from the yen's decline, which has pushed up the cost of imported parts and materials.

The company had pinned its hopes on its small and midsize LCD panels for smartphones, which are manufactured in Japan. But it found itself in a price war with Chinese LCD panel makers toward the end of the year, just as its main customers were adjusting to shrinking sales.

The company plans to put together a new three-year business plan in hopes of preserving a financial lifeline from its two main creditors, Mizuho Bank and Bank of Tokyo-Mitsubishi UFJ.