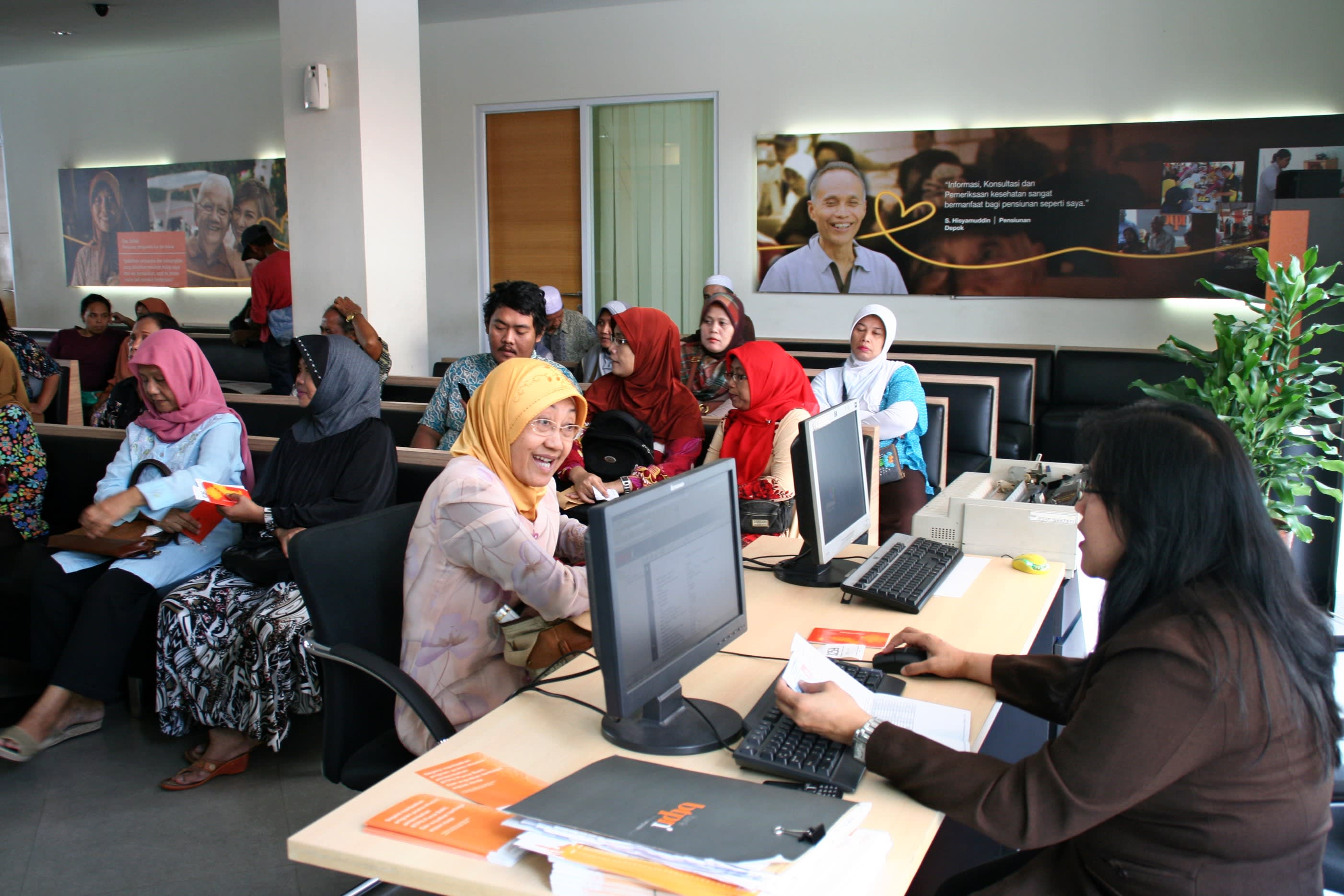 JAKARTA -- Indonesia is making the radar of Japan's banking and insurance giants, as the world's fourth-biggest country is poised for a great leap forward.

Sumitomo Mitsui Banking, the lending unit of one of Japan's three megabanks, has decided to tap into Indonesia's low-income class of 60 million to 70 million -- people who currently have no bank account -- as potential customers for cellular phone-based banking services.

Such services will be launched as early as the beginning of next year through PT Bank Tabungan Pensiunan Nasional (BTPN), a local affiliate in which the Japanese bank has a 40% stake. With cell phones serving as proof of identity, customers can conduct such transactions as deposits, withdrawals and transfers at the touch of a finger, without the use of a cash card or signature. Funds can be collected or paid at select retail stores, making the services available even in areas where the midtier bank has no presence.

Cell phones, which have found their way into the hands of Indonesia's low-income earners, allow BTPN to offer the new services, currently not offered by major local banks, at low cost, BTPN President Jerry Ng said.

BTPN has traditionally excelled in loans to a wide range of borrowers from the middle to lower classes, including pensioners, local store owners and farm wives. At the beginning of each month, when pension payments are received, its branches open their doors at 5 a.m., and offer free medical consultations by physicians as well. Bank employees also teach first-time borrowers the ABCs of bookkeeping. BTPN has established itself in farm communities as a sub-prime lender, akin to Japan's consumer finance companies, through an array of fine-tuned services.

In this country of 250 million, the Sumitomo Mitsui-BTPN team aims to make low-income earners loyal customers. In 2013, according to Boston Consulting Group, those that spend less than 10,000 yen ($95) a month numbered 59.3 million. The figure is expected to drop by half to 28.3 million by 2020, as the anticipated economic growth will help many move up to the middle class. This suggests that individuals capable of saving enough money to justify bank accounts will increase accordingly.

Sumitomo Mitsui, which is expanding its reach in Southeast Asia, announced earlier this month that it has acquired a 12.5% stake in Acleda Bank, Cambodia's largest bank. In Myanmar, it has applied for a banking license.

Insurers on the bandwagon, too

Japanese insurers are also stepping up efforts to cater to low-income folks in Indonesia.

Tokio Marine Holdings began selling in May term life insurance policies with monthly premiums of around 500 yen, less than 20% of premiums for popular variable policies.

David Beynon, who heads Tokio Marine Life Insurance Indonesia, says many of the life insurance products sold in the country are geared toward those that spend at least 30,000 yen a month. The company's new products are targeted at consumers below that threshold, he adds. Thanks to television commercials and call center customer service, more than 60,000 inquiries have been fielded in the first two months.

In May, Nippon Life Insurance decided to invest in Sequislife, a midtier Indonesian insurer with a strong following among wealthy Indonesians of Chinese ancestry. It now aims to expand into other ethnic groups.

Indonesia's life insurance market is valued at just over 1% of gross domestic product, compared with around 9% for Japan. Nippon Life plans to boost its sales force from 11,000 now to 66,000 by 2020.