Startup Riverfield takes on Intuitive Surgical with much cheaper product 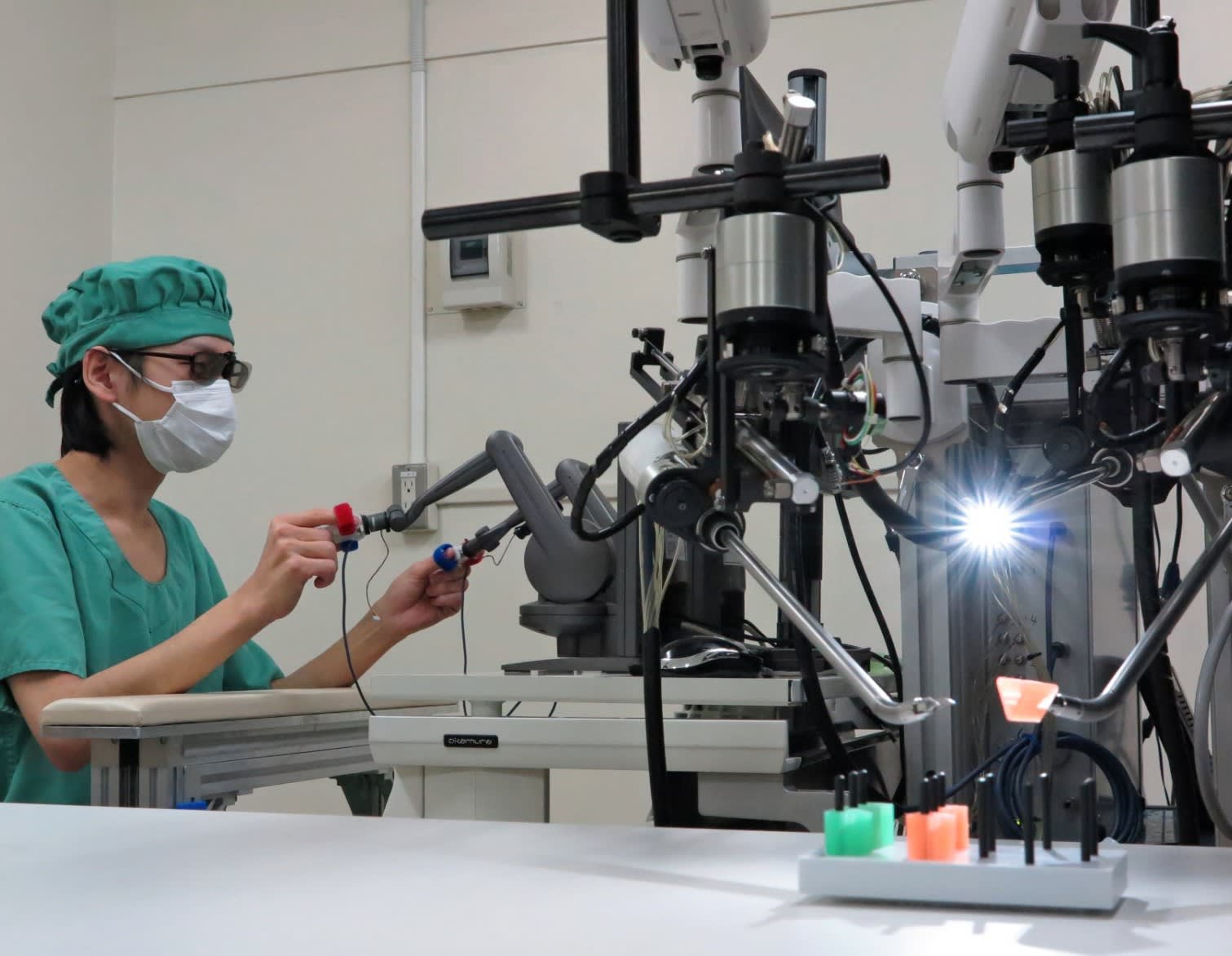 TOKYO -- Riverfield, a Japanese startup with origins at the Tokyo Institute of Technology, has thrown down the gauntlet to Intuitive Surgical, the dominant player in the global surgical robot market.

Riverfield is looking to close in on Intuitive Surgical by putting Japan's first domestically made surgical robot on sale at half the price of the U.S. behemoth's da Vinci robotic surgery system, by 2020.

To accelerate its surgical robot development drive, Riverfield has secured 1.15 billion yen ($10.1 million) from Toray Engineering and some other companies by increasing its capital through a third-party allotment scheme. 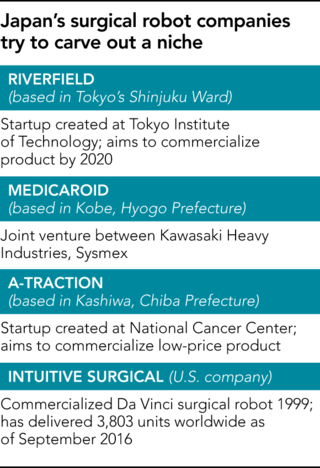 Riverfield will aim to grab a significant market share from Intuitive Surgical by launching a much lower-priced but still highly accurate and user-friendly product after getting the green light from Japan's Ministry of Health, Labor and Welfare.

Riverfield, established in 2014, is a medical robot developer based in Tokyo's Shinjuku Ward. The startup is now developing a surgery assistance robot that can make fine and accurate movements.

Among other things, the robot now under development features the capability to give the doctor operating the machine a sense of touch thanks to its air pressure control technology. This will make it easier to perform delicate surgery.

In a prostate cancer operation, for example, it is necessary to remove cancerous tissue while maintaining intact functions such as urination. This is a very difficult job for humans to do by hand, as it requires 1mm movements.

Among the companies that purchased new Riverfield shares issued through a third-party allotment are SBI Investment, Jafco and Beyond Next Ventures, as well as Toray Engineering.

As a result of the share transactions, Riverfield's capital and capital reserves now total about 2 billion yen.

Riverfield is now assembling a prototype. The startup plans to put Japan's first domestically produced surgical robot on sale as early as 2020 if it can get safety and operability approval from the Ministry of Health, Labor and Welfare.

Using the newly secured funds, Riverfield will step up its preparations to produce and sell its surgical robot.

Toray Engineering already manufactures an endoscopic surveillance assistance robot for Riverfield on a contract basis. In addition to providing support in fundraising, Toray Engineering intends to cooperate with Riverfield in production and sales of the surgical robot.

Intuitive Surgical's da Vinci was originally developed as a system to remotely perform operations on soldiers injured on the battlefield. The company has a strong track record, having delivered some 4,000 such systems around the world, including about 250 in Japan.

This is enough of a dominant share to be a near monopoly on the global surgical robot market. But the system is expensive, priced at 250 million yen per unit and annual maintenance costs that exceed 20 million yen.

In addition to the high initial outlay and maintenance costs, insurance coverage is limited to surgeries for prostate cancer, kidney cancer and so on. That is why the introduction of the da Vinci system has put pressure on many hospitals' finances. Japan developing the smart, networked operating room of the future

There is a possibility that if rival companies can offer lower-priced surgical robots, the U.S. giant's dominant position in the global market will be eroded. Under such circumstances, competition is intensifying, with some companies aiming to sell new products within the next several years.

Riverfield is aiming to sell its surgical robot at half the price of the da Vinci system. The advent of such a low-priced surgical robot, if realized, will help cut medical costs. Riverfield will seek to sell its product first in Japan and then in the rest of the world.

To be sure, surgical robots are still expensive. But they bring great benefits to both hospitals and patients as they can perform delicate jobs safely. The advent of affordable products with diverse functions, if realized, is expected to lead to the proliferation of operations using robots.

According to Reenita Das, the head of the healthcare division at U.S. research firm Frost & Sullivan, one of the great benefits of using surgical robots is the reduced physical burden on patients. Their prices will decline within the next five to seven years.

In addition to Riverfield, Medicaroid and A-Traction are also pushing ahead with their surgical robot development in anticipation of a further market expansion.

Medicaroid, based in Kobe, Hyogo Prefecture, is a joint venture between Kawasaki Heavy Industries and Sysmex, while A-Traction, headquartered in Kashiwa, Chiba Prefecture, is a startup born in the National Cancer Center.

A-Traction is aiming to commercialize a product priced at as low as around 30 million yen.