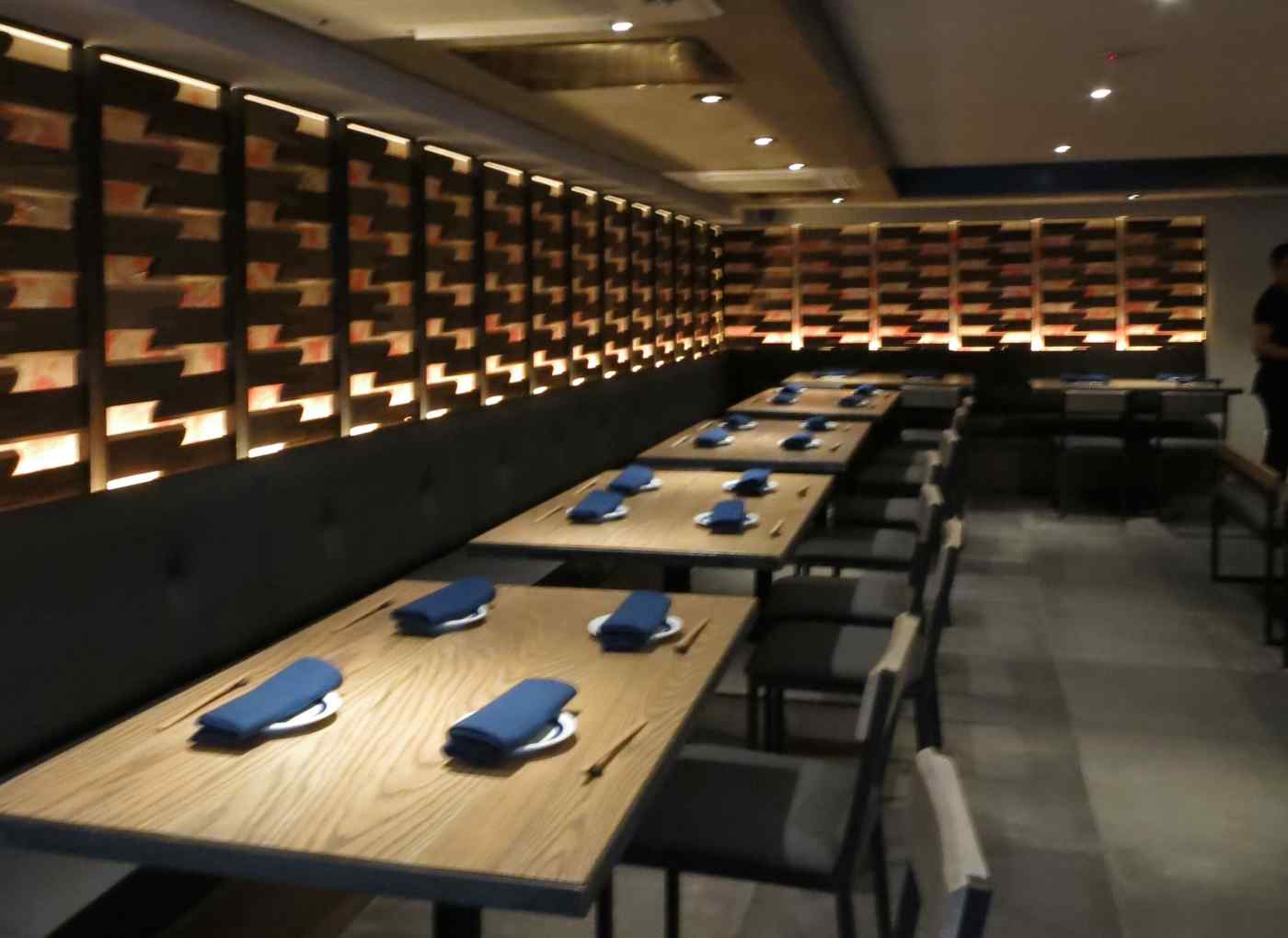 NEW YORK/TOKYO -- The most obvious similarity between the flagship branch of TsuruTonTan, the wildly popular Japanese noodle-fest restaurant chain in Tokyo's Roppongi entertainment district, and its newly-minted New York outpost is the line snaking out of the door. The line forms early outside TsuruTonTan. (Photo by Fran Kuzui)

The hot topic of conversation focused on whether there was space for a new manifestation of Japanese cuisine in New York's food culture, and whether the city was ready to consume yet another kind of noodle. Would Americans take to the pleasures of a stocky udon noodle brought from Japan, made from wheat and served in a light broth with a cornucopia of ingredients? 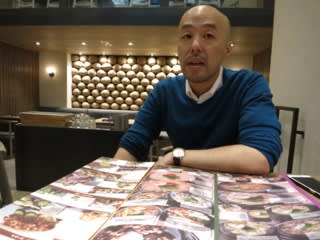 On a recent evening, I sat at the bar of TsuruTonTan New York before the dinner rush, waiting for Joji Uematsu, Dining Innovation's vice president and restaurant manager. "Ohayo!" (Japanese for the first greeting of the day) rang out as the multicultural staff arrived for work. Soon servers were whizzing around straightening chopsticks in front of plates and arranging chairs as if preparing for a party.

Meanwhile, a sales representative for a Japanese sake manufacturer arrived, bowing slightly and extending a business card toward the Western floor manager and an Asian employee manning the front door. The salesman pulled out a bottle of daiginjo, a sought-after form of the Japanese rice wine,and began to pour. 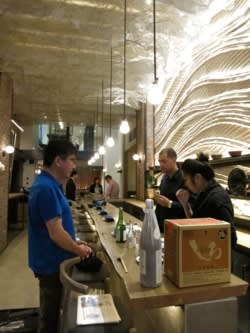 Uematsu, a Japanese transplant with an easy smile and cool New York vibe, came bounding out from the back. Alcohol is not traditionally served with udon in Japan. Asked who selects the sake served at the restaurant he said there was no beverage manager and that the staff took turns deciding what was good.

One concept at TsuruTonTan, he explained, is to offer Japanese hospitality combined with special appetizers that are not usually served with udon noodles, presenting a chef-driven cuisine at a lower than usual price point. That philosophy alone suggests that this eatery is not an average Japanese export.

Tomoyoshi Nishiyama, chairman of both Dining Innovation and its U.S. offshoot, started in real estate as the Japanese economic bubble was bursting in the early 1990s and soon found himself watching his holdings dwindle. One evening he looked around in a Korean-style "yakiniku" barbecue restaurant and decided he could do better. 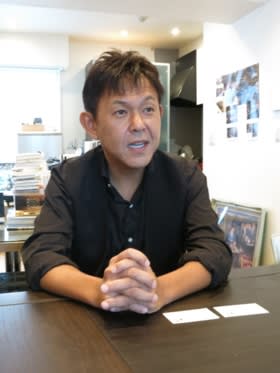 Rather than invest directly in property he decided to use inspiration and depend on his vision, opening the Gyukaku barbeque chain in Japan, serving good quality meat at a reasonable price in an attractive atmosphere. Its success prompted him to expand into retail under the name Reins International, acquiring the rights to AM/PM convenience stores in Japan and the Japanese high-end supermarket chain Seijyo Ishii.

While still under 40 years old, the entrepreunerial chain-restaurant developer grew Reins International to 2,300 outlets spread throughout Asia and $230 million in annual sales. After a management buyout in 2007 he ran the company as Rex Holdings until 2012 when he sold the retail assets and spun off the restaurant holdings.

He then founded Dining Innovation, giving himself space to return to his passion for finding new concepts and expanding them, while spending less time on management. He likes to say that he moved from working within the paradigm of "money creating money" to the model of generating money through authenticity and fun.

Sitting in his Tokyo office surrounded by a large drum set and souvenir photos of himself manning various disk jockey stations, Nishiyama explained why he decided to open in New York. The conventional image of Japanese exports has always been products such as cars, electronics and machinery. But Nishiyama said he wanted to take Japanese hospitality and expand it as an asset.

He began his foray into the U.S. in 2001 with the same Japanese style beef-centric Gyukaku barbeque restaurants that were so successful in Japan. People told him he was crazy to expect American people to grill food at a table when they could just as easily throw some meat on the barbeques in their back yards.

He consulted pioneering Japanese star chef Nobu Matsuhisa -- who told him not to listen to anybody, just do what he considered interesting. There are now 40 Gyukaku restaurants in the U.S. With TsuruTonTan Nishiyama feels that guests have a chance to have a similar authentic experience of Japanese culture with large ceramic bowls hand-made in western Japan, unique ingredients and generous hospitality. 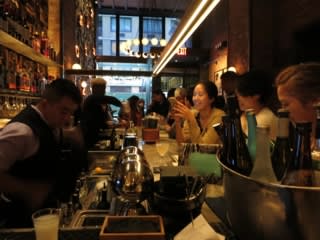 New York manager Uematsu chose to open on the former lower Manhattan site of Union Square Cafe, one of New York's most iconic restaurants, which vacated the space due to the high rental costs in one of New York's trendiest areas. Uematsu said he suspected that nobody else would venture into the space to serve food and that by doing so, he would receive good local publicity.

His expectation was born out, although the company has no official press or public relations operation and rather, depends on social media and publicity around the U.S. noodle boom. A decade ago, Japanese food served in the U.S. was "predictable and followed traditional tastes," he said. Driven by the great succcess in New York and elsewhere of the Ippudo ramen chain, which serves Chinese-style noodles in a beef or vegetable broth, the noodle boom changed those ideas and drove social media interest in newer and more genuine-seeming Japanese dishes. 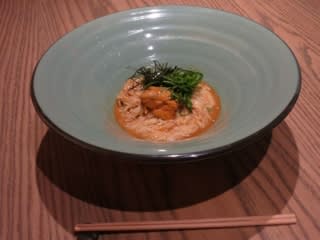 Uematsu said that udon mixes better with ingredients than any other Asian noodle and absorbs sauce like pasta, making it almost Western. Uematsu thinks that Americans will understand it well and enjoy its versatility -- the New York TsuruTonTan serves special udon dishes not available in Japan including uni (sea urchin) udon, a blast of savory Japanese umami flavor more commonly found at sushi bars and in establishments serving high-end ingredients.

TsuruTonTan's materials are primarily sourced from Japan, especially the flour and salt used in the noodles. The broth is made from sachets of ocean ingredients blended in Kyoto. While ramen uses beef and pork broth, this udon is strictly a seafood-based dish, a bit healthier and lighter.

Michael Romano, the original chef at Union Square Cafe, visited TsuruTonTan New York recently to encourage the restaurant's Japanese chefs and find a good bowl of hot noodles. Romano, who now spends part of each year cooking and living in Japan, is on the board of New York's Gohan Society, which promotes Japan's culinary heritage. These days, he noted, instead of going to Europe to study, many younger Western chefs are applying for the group's program to study Japanese use of seasonal ingredients and plating. "Japanese knives are also the rage," he said.

Was it a stroke of genius to open in the Union Square Cafe space or a foodie gamble? With the same number of seats (128) TsuruTonTan needs to serve twice as many people every day as Union Square did to earn the same income.

The average bill in Roppongi is $20, with a fast turnover. In the New York branch the average check will be above $40 because of added appetizers and drinks. But the question of profitably remains open as TsuruTonTan feels its way and eases into service. Meanwhile Uematsu is already looking for an uptown space, possibly hoping to appeal to a more local clientele.

Just before the 5 p.m. opening, thumping music begins to envelop the cozy tables and a central communal table in the lower dining room. Someone yells, "Three minutes to go guys!" The door opens and a mix of Japanese locals and curious foodies are the first through the door. Friendly apron-clad waiters approach the tables, eager to become each diner's best friend for the evening. If Nishiyama can make it here, he can make it anywhere.