The market is promising, given that the country has a population of about 250 million and an average age of 29.

Ajinomoto, Japan's largest nonbeer food- and beverage maker, considers Indonesia, Vietnam and Brazil to be key markets, where it can expect to ride waves of population and economic growth. For the year ending March 2021, Ajinomoto sees its food division booking 500 billion yen ($4.43 billion) worth of sales in Southeast Asia and South America. That would be more than what the food division now makes in Japan.

Ajinomoto is to spend about 3.2 billion yen erecting a building with total floor space of around 10,000 sq. meters at a food products compound in West Java. The facility will allow Ajinomoto to raise its total output in Indonesia by 30%, including that of an existing factory in East Java. 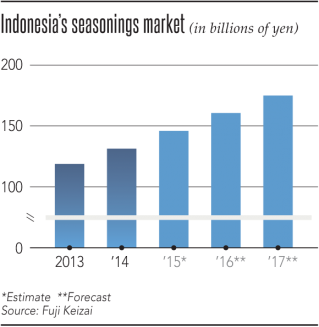 Ajinomoto is also using the country as an export hub. In recent years, Ajinomoto has delivered Indonesia-made halal-certified seasonings to Saudi Arabia and other nations.

Since Ajinomoto set up its local unit in 1969, the company has been producing and selling Masako brand seasonings, monosodium glutamate products and other flavorings in Indonesia.

Ajinomoto has roughly 1,800 sales representatives who visit rural retailers, helping the company cast a wide net over the country. Ajinomoto has also successfully tailored its products to Indonesian tastes.

The company's food sales in Indonesia stood at about 33 billion yen in fiscal 2014. This summer, Ajinomoto will launch a new company in Jakarta to make frozen bread for hotels and restaurants.

By fiscal 2020, Ajinomoto expects its Indonesian consumer foods business to achieve a 200% leap in sales, compared with fiscal 2012.

Masako hit the market in 1989. The powdered seasonings give a meaty flavor to home-cooked and street-stall meals. The seasonings mix spices with chicken and beef bouillon. Masako has captured slightly more than 60% of Indonesia's flavorings market.

Many Indonesians who are smitten with Masako are middle-class consumers. The Boston Consulting Group predicts that Indonesia's middle-class population will hit 117 million by 2020, nearly double the 2012 figure.

In Indonesia, low-income earners tend to eat at street stalls and other improvised kitchens. But with income levels rising, more Indonesians can afford a refrigerator and other kitchen necessities, and are cooking at home.

More recently, the Indonesian rupiah's rapid decline has been pushing up prices, making people reluctant to eat at restaurants. The trends have helped Masako sales grow slightly more than 10% on an annual basis.