TOKYO -- Japan is Asia's biggest fashion market and already attracts talented designers from around the world. But State Minister of Economy, Trade and Industry Midori Matsushima wants to see Japan take a bigger role on the global fashion stage and make the country one of the go-to places for the world's fashion-conscious. 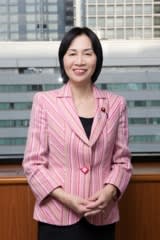 Matsushima has been hands-on about achieving this goal. She gave a speech in March to open Fashion Week Tokyo 2014, and recently spoke with The Nikkei Asian Review about the current situation of and prospects for the fashion scenes in Japan and the rest of Asia.

Q: What were your expectations for Fashion Week Tokyo and how do you feel it went?

A: Ahead of the event, I went to Italy in January to promote Edo kiriko cut glass and other items as part of the government's Cool Japan initiative. I wanted Fashion Week Tokyo to be an opportunity to promote Japanese fashion to the world, not only to boost exports but also to attract tourists. Wonderful fashion and cuisine have become major tourist attractions in France and Italy. And with traditional Japanese cuisine now listed as a UNESCO World Heritage, it too is gaining attention. I think Japan's fashion industry profile will only grow.

Fashion materials produced by Japanese makers are of the highest quality. I spoke with Ms. Angela Missoni, the daughter of Italian brand Missoni's founder and its creative director, during last autumn's Fashion Week Tokyo. She praised Japanese materials and said that her brand uses Japanese fabric, lace and buttons.

A lot of global luxury brands use ribbons made by Japanese maker Mokuba. I think we should put more energy in promoting such things.

The Japanese fashion market is shrinking as the younger population declines, so the industry needs to expand abroad. Many people welcomed the news that the annual number of foreign tourists to Japan exceeded 10 million last year. But we shouldn't be satisfied with that figure. Many people come for skiing, sightseeing in Kyoto or shopping in Tokyo's Akihabara district. We could make a further selling point of promoting tourism for Japanese fashion items.

The Ministry of Economy, Trade and Industry does not financially support Tokyo Fashion Week. We subsidized a fashion correspondent of the International Herald Tribune (now the International New York Times) to cover the event, and also invited an editor of the fashion magazine Elle from Paris as well as influential bloggers. These moves were done to spread knowledge of the event to fashion-conscious people outside of Japan. I hope these efforts will help promote Japanese fashion abroad. With Japan's population aging and shrinking, this is the last chance for Japanese businesses and industries to survive and help realize Prime Minister Shinzo Abe's slogan that "Japan is Back." It is now or never.

Fashion Week Tokyo 2014 was held in Shibuya. I hope the area will become a global trendsetter, not just the venue for successful fashion shows. I want Shibuya to become a mecca of fashion just as Akihabara is a mecca for anime and manga culture. One of my ideas is to turn the Shibuya 109, Hikarie and other retail complexes into trendsetting places, organize fashion shows and live broadcast models on runways.

Not many people in Tokyo itself knew that Fashion Week Tokyo was going on, and that's a shame. Visitors were mostly industry people from fashion media and apparel companies. In Milan, a show was even held at the stock exchange. And fashion shows were broadcast live on large screens all over the place. The entire town was associated with fashion. I hope Shibuya can become such a place.

Q: Many Asian designers took part in Fashion Week Tokyo. Also, a popular Thai brand is coming to Japan.  How do you want Japan to be seen by the rest of Asia?

A: The ministry is promoting Japanese fashion abroad as part of the Cool Japan initiative. We sponsored 30 brands by up-and-coming Japanese designers to open a pop-up store in Singapore organized by Parco in February last year. We also supported two Japanese brands to participate in Jakarta Fashion Week last October.

Despite these efforts, some surveys showed shocking results. It asked respondents about foreign countries they pay close attention to in terms of fashion and cosmetics. In Hong Kong and Taiwan, Japan is more popular than South Korea overall. But this is the opposite in Shanghai, Malaysia, Vietnam and Indonesia. South Korea has a strong influence on Chinese consumers.

Apart from fashion, sales of Japanese TV dramas will increase if people in Asia develop interest in them, and popular dramas are likely to help attract more foreign tourists to Japan. Culture is linked with politics, economy and diplomacy.

Having attractive cultural content is an advantage Japan has. Even if political relations with China and South Korea deteriorate, people still want to come to Japan because of anime and dramas. I want Japanese fashion to join their ranks. It will be nice if fashion becomes another reason for foreigners to like Japan along with anime and manga.