TOKYO -- If all goes according to plan, the Iskandar Malaysia project will create an economic, social, academic and health care hub in Malaysia to rival neighboring Singapore. As things stand, that's a big if. Development of the Iskandar Malaysia project is still ongoing.

The $82.8 billion development project, the country's largest, is situated in the southern part of Johor State. The location is proving popular with students and their families, as well as service-sector businesses. What the project lacks is the large-sale employment opportunities needed to achieve its population target of 3 million -- a little more than half that of Singapore.

There are already more than 10 international schools in the area, including Singapore-based Raffles American School. The schools are expensive but offer high-quality education. Some of them offer classes not only in English but also in Chinese. 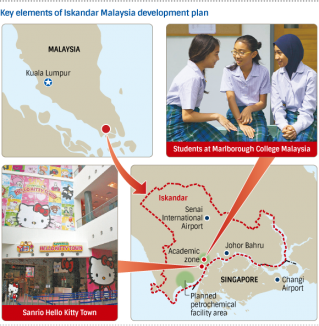 A roughly 20-minute drive from the border with Singapore sits the wooded, well-maintained campus of Marlborough College Malaysia. Robert Pick, head of the British private school, said the institution offers the best environment for nurturing global talent. The school is the first expansion for Marlborough College -- counts the Duchess of Cambridge among its alumni and alumnae -- beyond its home in Wiltshire, England.

Its 740 or so students, ranging from pre-preparatory pupils to senior high school students, come from a variety of countries: 60% are from Europe and the U.S., 20% from Malaysia and 8% from Singapore.

There are 35 Japanese students, too. A 40-year-old company owner from Japan took up residence in the state of Johor last autumn to send his eldest son to Marlborough's preparatory school program. He picked the school, he said, because he wanted his son to learn how to build rapport with others and make decisions even in a tough situation -- qualities the father believes are necessary for success in global business.

He said the proximity to Singapore, Asia's financial hub, is also convenient for him, as his work involves providing asset management advice to private investors. He said he is mulling starting business there.

A 38-year-old Japanese mother who wanted to educate her children abroad said she chose Malaysia in part because it is easy for Japanese citizens to obtain visas there. She sends her children to Marlborough and Raffles American School, while her husband stays in Japan.

Compared with Singapore, Malaysia is far less strict in its visa requirements. Parents are allowed to stay in the country if their children obtain a student visa, called a Student Pass, and foreigners eligible for the Malaysia My Second Home (MM2H) program can stay in the country for up to 10 years if they meet certain requirements in terms of liquid assets, offshore income and a few other criteria.

The mega development has also attracted Japanese businesses. In 2013, trading house Mitsui & Co. acquired, through a subsidiary, a 19.99% stake in Medini Iskandar Malaysia, a company engaged in urban development of the Medini district of Johor State, for 15 billion yen ($124 million).

The development of leisure facilities is also well under way. In 2012, Japanese character goods company Sanrio opened a Hello Kitty Town theme park there, its first outside of Japan.

The future is not entirely rosy, however. So far, the project has focused on service sectors, such as education and health care. Bigger employers, such as manufacturers, will be needed to support the targeted population of 3 million. But with Malaysia's wages higher than those of other Southeast Asian countries, labor-intensive businesses are less than eager to participate in the project.

Sales of condominiums, whose prices had been surging, have started to slow in the area, which is currently home to around 1.7 million residents.

Bad cross-strait access is exacerbating the problem. It can take up to two hours to drive to the center of Singapore due to heavy traffic jams at the border control during peak travel times. Although the two countries are scheduled to be connected via a subway in 2018, the project may not be completed according to schedule. Construction has not started yet, a local real estate developer said.

The government kicked off the 20-year project in 2006 with the aim of building thousands of housing units and inviting businesses in nine categories -- such as education, health care, finance and logistics -- to set up shop on 2,200 sq. km of land in the south of the state of Johor. The project is modeled on Shenzhen, China, and covers an area roughly three times the size of Singapore.