Kampot thrives on spice of life and one man's dream Hironobu Kurata first came to Cambodia in 1992 as a volunteer in a United Nations peacekeeping mission. After forming his own aid group in Japan, he returned to help revitalize the traditional pepper industry. (Photo by Ron Gluckman)
RON GLUCKMAN, Contributing writerJuly 27, 2016 19:00 JST | Japan
CopyCopied

KAMPOT, Cambodia -- Pepper has been called the king of spice, and for ages, Cambodia cultivated a regal peppercorn crop which ranked among the world's finest. Devastated under the horror years of the Khmer Rouge regime in the 1970s, in recent years the local pepper industry has rebounded and is now earning attention from chefs and gourmets far beyond Asia.

Much of the credit for this remarkable resurgence goes to a remarkable entrepreneur and "pepper sparkplug" from Japan, Hironobu Kurata. 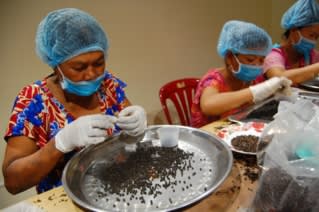 Kurata, now 47, was an idealistic 21-year-old when he arrived in Cambodia in 1992 as a volunteer who wanted to help the transition from civil war to democracy. Aid workers were flooding into Cambodia, and the United Nations was spending millions of dollars on what was then the region's largest ever peacekeeping operation.

The mission left a mixed record, laying the foundation for the end of Cambodia's long-running armed conflict but cementing political power in the hands of hardliner Hun Sen, who recently entered his fourth decade of rule. A disillusioned Kurata returned to his home near Nagoya, but he never abandoned his ideals.

"I really wanted to make a difference," he said. "I wanted to make real development, to do more," he told the Nikkei Asian Review. Determined to try a different approach, he formed his own aid group, raised funding in Japan, and returned to Cambodia in 1994 with an ambitious scheme.

For the past two decades, Kurata has devoted himself to assisting Cambodia in a manner extolled -- but rarely realized -- by aid groups: working from the ground up. He seized on the tiniest of agricultural products, the peppercorn, as the seed for his plan. "I wanted to work at the most local level, with small farmers," he noted.

Reviving a ruined agricultural industry was a noble task, with a rich history. Pepper was among the spices that first enticed westerners to Asia. It had been grown for hundreds of years in Cambodia, but became a lucrative global export in the 1800s, when French colonialists farmed the rich soils of the south. Soon, Cambodia's pepper rivaled crops from Asia to Africa.

Then, the Cambodian pepper story dived in the same tailspin as everything else in a nation described as one of Asia's most advanced civilizations 1,000 years ago. From that lofty pinnacle, the Khmer Rouge plunged Cambodia back to Year Zero in the mid-1970s. The banks, books, culture, families, farms -- everything was destroyed. At Starling Farm, among the largest of two dozen pepper farms around Kampot, a showroom displays all the varieties and grades of pepper.​ (Photo by Ron Gluckman)​

"Only a few pepper farmers remained when I started," recalled Kurata. "None were growing commercially. They just grew for themselves." Yet Cambodia's hearty pepper survived even the murderous and destructive Khmer Rouge regime. Some cultivation remained in the southern coastal area, and Kurata believed the crop could be revived to enrich poor farmers in one of the world's neediest nations.

For decades, he was a one-man pepper taskforce. He acquired land in Koh Kong, in southwestern Cambodia, beginning his crop with cuttings of old plants. He opened Kurata Pepper, a shop in Phnom Penh that showcased premium pepper alongside novelties of his creation, like pepper popcorn and pepper pickled in palm vinegar. He was also concerned with broader help for the local community and assisted other farmers to grow organic crops, even trading on their behalf.

Some who encountered Kurata likened him to a "Cambodian Don Quixote," fixated on a seemingly impossible quest. Inspiration came from an old book of statistics given to him by an uncle, who had worked in Cambodia decades earlier. Right through the 1960s and until the Khmer Rouge in the 1970s, pepper was one of the most important exports from Cambodia, he said.

"Many people thought it was crazy," he conceded. In 1994, when he started, the entire country produced only 22 tons of pepper, he said. Last year, the harvest topped 10,000 tons.

That is a fraction of pepper powerhouses, like world leader Vietnam, which produces around 150,000 tons annually. However, pepper is a growing commodity in a country with precious few exports, and Cambodian pepper can command top prices.

Much of Cambodia's prized pepper comes from the country's south, particularly around Kampot, a riverside town near the coast, shrouded by hills. The mix provides the heat, moisture and shading that experts say nurture the finest pepper.

Kampot pepper sells for up to $16 per kilo -- about eight times the price of common pepper produced by Asia's major growers in Indonesia, Sri Lanka, India, China and Vietnam. In 2010, Cambodia made Kampot a special geographical area, allowing growers to brand the special local pepper.

In February, Kampot pepper became the 20th product from outside the European Union to be granted the EU's Protected Geographical Indication status. This provides a system of origin categorization that distinguishes the uniqueness of Kampot pepper, much like Parma ham or French Champagne.

The economic gains envisioned long ago by Kurata are slowly transforming Kampot, a charming old town with a French provincial air, with its faded colonial blocks, small streets and, suddenly, a new generation of tourists. This art deco fish market recently reopened as a high-end restaurant in the increasingly reinvigorated Kampot. (Photo by Ron Gluckman)

Unchanged for decades, Kampot is now getting a reboot, its old buildings reborn as trendy cafes, guesthouses and boutiques. The dazzling gold, art deco fish market on the riverside recently reopened as the high-end Fishmarket restaurant, while the town's formerly defunct market, derelict for ages, is lined with coffee and ice cream shops. And there are many boutique shops selling Kampot's premium pepper.

BoTree shop sells high-end pepper from BoTree Farm, launched four years ago. Small 90-gram bags sell for $6.50 for black pepper, $8.75 for the highly-prized white and red pepper varieties. After the last harvest, in May, workers were in the back of the shop, meticulously sorting pea-sized pepper corns with tweezers.

Pepper is a labor-intensive industry, so obtaining premium prices for part of the crop helps sustain small farms. The shop opened this year, targeting Kampot visitors. New packaging will highlight the Kampot origin and that the pepper is organically grown.

It takes nearly an hour bouncing along muddy red pothole-strewn roads to reach some of Kampot's top pepper farms, like Starling Ranch and La Plantation. The latter launched only three years ago, with 22,000 vines but plans to double that this year. Both properties are distinguished by modern equipment, and services geared toward showcasing pepper farming, much like wine regions of France or the Napa Valley.

"We bought this land 15 years ago, when there was nothing here but jungle," said Starling CEO Anna Him, from Kampong Cham in central Cambodia. "When we bought the land, we didn't know what we'd do with it. There were land mines all over; this was a Khmer Rouge base during the fighting."

A chance discovery of an old pepper vine prompted the cultivation of a test plot of 300 poles, which the pepper vines entwine, on one hectare. The first harvest in 2004 was about 10-15 kilos, she said. Using cuttings from the original pepper, the farm expanded to six hectares of pepper, producing 3.5 tons in 2014. 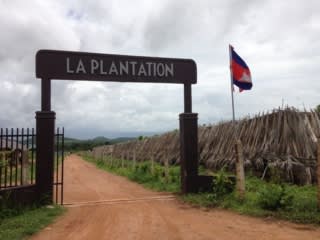 La Plantation launched only three years ago with 22,000 vines. It plans to double that amount this year with modern equipment and provide services to showcase pepper farming. (Photo by Ron Gluckman)

On a hill with expansive views over pepper vines and lush greenery into the distance, Starling recently opened 18 rooms and bungalows. Tourists can stay, with guided tours from field to processing pepper.

Many hope that pepper can spice up tourism in Cambodia's scenic south; the coastal town of Kep is close and beaches at Sihanoukville are within easy access. The area has long drawn adventure tourists who trek to Bokor Hill Station, formerly a spooky ghost town on a nearby hilltop. But few lingered long in Kampot.

Lately, Kampot has drawn crowds of backpackers, who stay at cheap guesthouses along the river, lulling in inner tubes and paddling boards. They can hurtle over the river on a new zip line, or join Climbodia for mountaineering programs in the hills.

Yet challenges to the industry underpinning Kampot's rebirth are formidable, and many fear that pepper production is already at great risk.

Pepper farmers in Kampot charge that traders and other growers are selling common pepper under the Kampot marquee. This is supposed to be controlled by the Kampot Pepper Association but some farmers, who requested anonymity, said the association is ineffective. Similar concerns surround the integrity of the organic designation, and Cambodia has a bad track record overseeing such matters.

"Will Cambodia strangle this golden goose?" pondered one pepper farmer. "Frankly, I'm not hopeful. Cambodia hasn't ever been good about nurturing golden eggs."

Rathana Keo Peou grew up mainly in France, but returned to Cambodia where she is the Southeast Asian coordinator for CGIAR research on climate change, agriculture and food security. She conceded that oversight in Cambodia can be weak, but insisted that pepper commands special attention at the national level.

"The government has identified this as a top crop to be exported," she said. "Policies are being formulated, and I'm very positive about Kampot pepper. They are really developing protocols and looking at issues of quality control and certification."

Kurata, who almost single-handedly revived this industry, should be gleeful. He now produces around two tons of pepper from his own farm each year, and buying from other farmers, sells about eight tons annually through his shop and by export, mainly to Japan. Instead, he is gloomy.

"Now, there is a pepper boom, a pepper rush and it's not a good feeling," he said, noting recent cases of land grabs by powerful interests, similar to those plaguing agriculture elsewhere in Cambodia, where well-connected investors acquire vast tracts, evicting villagers, often violently.

"When I came here it was to help small farmers, local villagers to earn an income. Now you have big investors, and with big players, more chemicals and pesticides. It's just not sustainable."