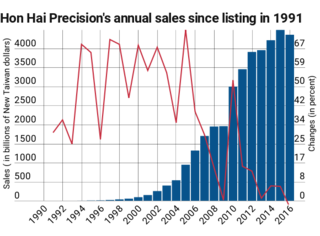 Foxconn's smaller rival, Pegatron which mainly assembles the iPhone 7 model, on the other hand, posted a 27.43% fall to NT$84 billion in revenues for December from a year ago.

Foxconn's unprecedented sales drop was in large part caused by Apple's first revenue fall since 2001. Apple is Foxconn's no.1 client and accounts for more than 50% of its revenue.

For 2016, iPhone shipment declined to 207 million, from 236 million in 2015, according to Vincent Chen, head of regional research at Yuanta Investment Consulting.

"Look forward to 2017, we think Foxconn's revenue could grow by 5% to 10%," said Chen. The growth drivers for the current year will come from healthier demand for the next iPhone 8 and a mild rebound in the PC market, according to Chen. Foxconn is also the world's biggest desktop assembler.

Foxconn's shares advanced o.6% to close at NT$84 ahead of the revenue report. They have gained 7.56% over the past 12 months.

A year of activity

For Foxconn, 2016 was an eventful year. While it strove for more orders from Apple, it also continued efforts to diversify its businesses to counter the slowdown in the global smartphone market.

It acquired Sharp, a struggling Japanese electronics manufacturer with a long history, in the hope of securing advanced display technology and consequently winning more orders from Apple.

Foxconn is also hoping that Sharp, an internationally recognized brand with a wide range of home appliances, will help its venture into the emerging connected device technologies.

Furthermore, the Taiwanese tech giant is trying to build its own smartphone brands to enjoy higher margins than contract manufacturing.

Apart from Sharp, Foxconn affiliate Hong Kong-listed FIH Mobile in May paid $350 million for Microsoft's feature phone business including a facility in Hanoi and licensing rights of the Nokia brand until 2024.

Foxconn has also been trying to look for growth by betting on startups, with a high-profile investment in Xiaoju Kuaizhi, parent company to Didi Chuxing, China's homegrown version of Uber.

The Taiwanese company paid $120 million for a 0.36% stake in Xiaoju Kuaizhi in September via a subsidiary.

But before any of the deals struck in 2016 can bear fruit, Foxconn found itself caught in rising tensions between Beijing and Washington following the upset victory of U.S. billionaire politician Donald Trump in the presidential poll.

Trump has been pushing American companies to make products at home, and has threatened to slap a stiff 45% tariff on Chinese imports. He has further appointed pro-protectionism figures to key trade posts.

Following Trump's election, Nikkei Asian Review reported that Apple asked Foxconn in June to look into moving some iPhone production to the U.S.

Foxconn confirmed on Dec. 7 that it is "in preliminary discussions regarding a potential investment that would represent an expansion of our current U.S. operations," without disclosing any detail.

The statement came a day after SoftBank Chairman and CEO Masayoshi Son met Trump in New York and revealed that the Japanese technology group and Foxconn would make joint investments in the U.S. SoftBank will invest $50 billion and Foxconn $7 billion over next four years, according to Son.

On Dec. 30, Foxconn's Gou announced in the southern Chinese city of Guangzhou that Sakai Display Products Corp., a Sharp affiliate controlled by his family, will invest 61 billion yuan ($8.77 billion) together with the local government to build an advanced panel facility there.

After the announcement, Gou told reporters in Guangzhou in no uncertain terms: "Foxconn will not leave [China]. Foxconn will stay here."