TOKYO -- Kobe Steel took back its net profit forecast for the current fiscal year and decided not to pay interim dividends for the six months ended in September, due to uncertainties surrounding potential losses from its ongoing data fabrication scandal.

The decision was announced on Monday along with its earnings result for the three months ended in September. The company had previously forecast a 35 billion yen ($307 million) net profit for the year ending March 2018, which would have been its first net profit in three fiscal years.

Kobe Steel's operating income and ordinary profit forecast were both pared back by 5 billion yen to 75 billion yen and 50 billion yen, respectively.

He said the decrease would come from 3 billion yen in aluminum and copper units and 7 billion yen from other businesses. 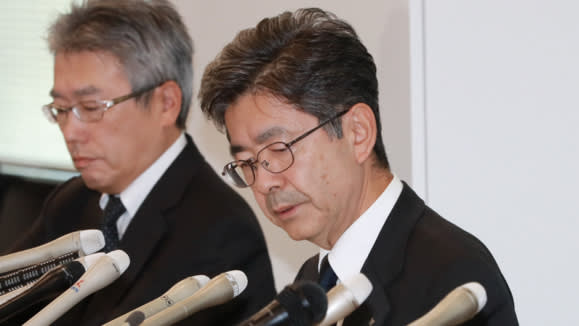 This is the latest setback for the third largest steelmaker in Japan, which was experiencing steady growth prior to the scandal. For the first half of fiscal 2017, sales rose 11.3% year-on-year to 907 billion yen, and the company posted a net profit of 39.3 billion yen, up nearly tenfold from 4.1 billion yen a year earlier.

"It is difficult at this time to make an estimation concerning the factors of deterioration in business performance such as the possible cost of compensation to customers and other parties and other causes," the company said in a statement. "As such, net income ... [is] undetermined."

The troubled company promised shareholders in July the resumption of interim dividend payments for the first half of fiscal 2017, the first in two years. But the financial uncertainties as a result of its mass-scale fabrication of data, which has extended from its aluminium and copper products to its core steel products, have clouded the company's outlook, meaning it will not be able to keep its promise.

Kobe Steel is believed to have falsified data for decades. Although the company claims product safety has been checked for about 80% of the 500-plus affected customers, it will likely face compensation claims for parts replacement and recall costs.

The U.S. Department of Justice has also asked the company to provide technical documents on certain products sold in the U.S. through its subsidiaries. If Kobe Steel is found to be criminally responsible, it would face considerable fines and compensation charges, both hugely damaging to earnings.

The series of events has investors worried, with Kobe Steel share prices falling as much as 43.4% since the scandal broke in early October. Its corporate bond prices have fallen rapidly too, and the steelmaker has already asked Japan's three mega banks for financial assistance totaling 50 billion yen. The banks -- Mizuho Bank, Sumitomo Mitsui Banking and Bank of Tokyo-Mitsubishi UFJ -- are believed to have already begun preparing the funds.

Kobe Steel will use the loans in case it becomes difficult to roll over its corporate bonds, of which 100 billion yen are currently in circulation.

The company has 120 billion yen in cash and deposits, as well as a 120 billion yen line of credit committed by its banks. It is in no immediate danger of defaulting on its debts, but is hoping the new loans will allay investor fears and avoid a credit crunch.