Kokoro the smiling robot wants to sell you travel insurance 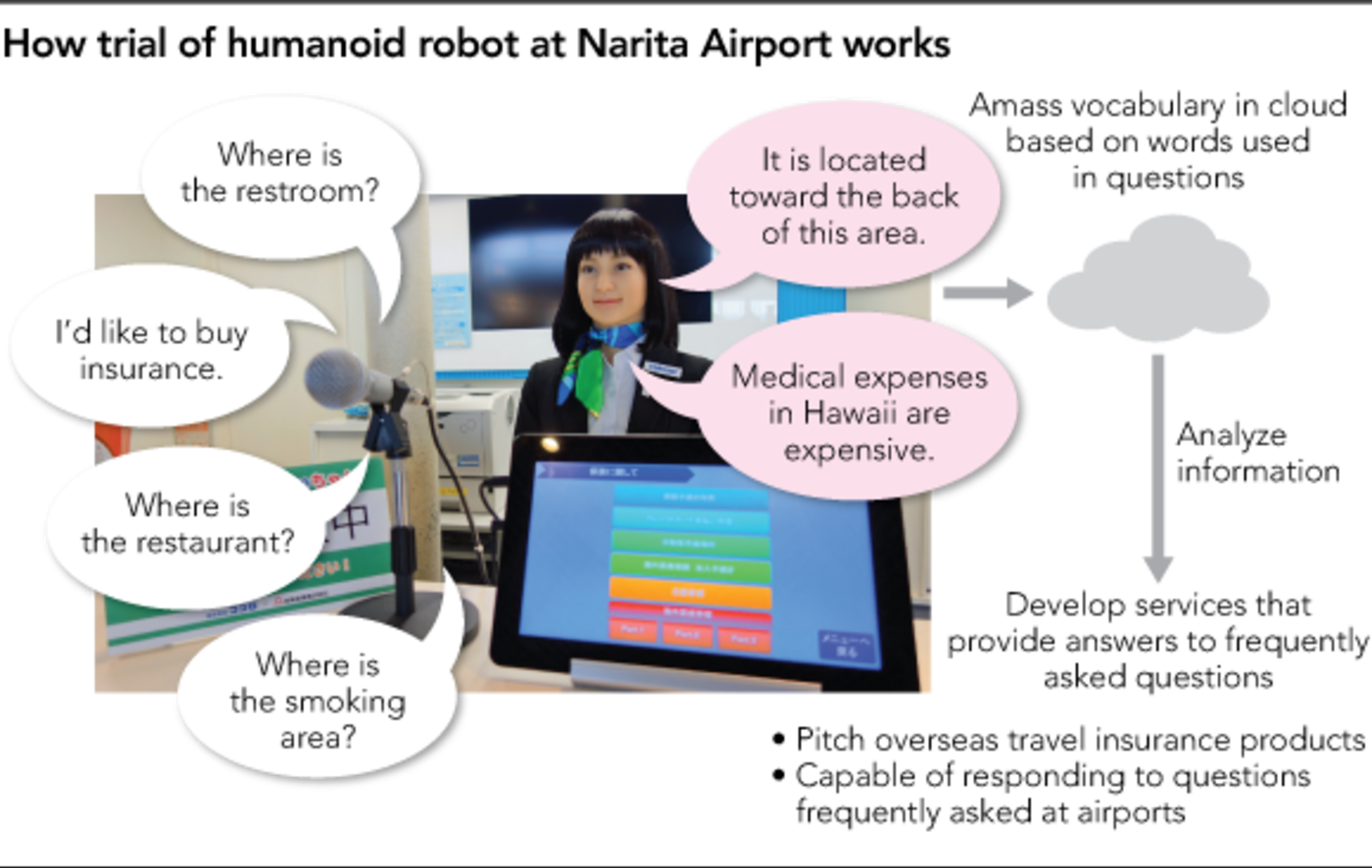 TOKYO -- Narita Airport, Tokyo's main international gateway, has a new employee. Her name is Kokoro, and while she specializes in hawking insurance, she is more than happy to give directions to the nearest restroom or restaurant. If she sounds a little stilted at times or her gaze is a bit distant, it's not because she's bored, it's because she's a robot.

Developed by Hello Kitty creator Sanrio and software company Kyoei Sangyo, Kokoro is being used on a trial basis at a counter selling overseas travel insurance on the fourth floor of the south wing of Terminal 1.

Travelers who approach Kokoro will see a gently smiling young "woman" with shoulder-length black hair dressed in a smart suit accented by a scarf. They will see no legs, as Kokoro sits behind a counter. Before every interaction, she instructs the visitor to first choose a language, either Japanese or English.

In one interaction, Kokoro warned that uninsured travelers visiting Hawaii would be hit with a hefty bill of 50,000 yen ($441) should they need to call an ambulance there.

Kokoro works for Greenport Agency, which operates insurance sales and foreign currency exchange services. Her job is to encourage travelers to buy travel insurance. Some 10% of people flying abroad from Narita do not take out such policies.

But she does more than pitch products and dispense advice about international medical situations. Kokoro is also adept at giving directions to destinations on the fourth floor. When asked where the restroom is, she promptly responds that it is right behind her counter.

Kokoro may be new to airports, but this is not her first employment gig. It is, however, the first time she is using technology that converts words spoken by customers to text, which is then accumulated in the cloud for analysis. That amassed information will be used to develop services to provide answers to frequently asked questions.

During the first week of trials at the airport, the most commonly used word by customers was "Japanese," as that was the option most people chose when initially told to select a language. Besides insurance, Kokoro was also often asked about bathrooms and restaurants in Terminal 1.

Upgrades will be made by July to enable smoother speech and otherwise improve Kokoro's conversational skills.

Placing a robot like Kokoro at strategic locations within the airport could be a huge help for tourists looking for assistance.

The robot and cloud system have an estimated price tag of 9 million yen.