This vehicle was crushed after the house above it was toppled by the earthquake in Mashiki, Kumamoto Prefecture, on April 14. The picture was taken the following morning. (Photo by Koji Uema)
April 15, 2016 14:50 JST | Japan
CopyCopied

KUMAMOTO -- The death toll from a major earthquake that hit Kumamoto Prefecture had reached nine as of 6 a.m. on Friday, police said. In the town of Mashiki, where the quake registered a 7 on the Japanese seismic intensity scale, eight men and women in their 20s to 90s were killed, mostly by their houses collapsing onto them.

In Higashi, a ward in the city of Kumamoto, a 68-year-old woman, fell in a house during the Thursday night temblor, then later died of her injuries at a hospital.

According to the Kumamoto prefectural government, at least 860 people in the prefecture were wounded, 53 of them seriously.

Meanwhile, many companies based in Kumamoto Prefecture had to suspend operations while they check for damage.

Iseki, a major agricultural machinery manufacturer, on Friday halted operations at its combine plant in Mashiki. Although the plant is near the epicenter, it appears to have barely suffered any damage, a company representative said.

Aftershocks were continuing on Friday, and the company wanted to keep its workers from entering the plant as a precautionary measure, the representative explained.

Panasonic shut down its Kumamoto semiconductor plant for similar reasons. "So far," a representative said, "there doesn't appear to be any damage serious enough to affect production." Still, though, Panasonic wants to examine production lines. 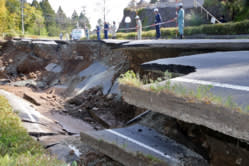 This road in Mashiki, Kumamoto, collapsed from the earthquake.

Honda Motor stopped production at a motorcycle plant in Kumamoto immediately after the quake erupted. The plant was still closed as of Friday morning, and a company representative said no decision has yet been made as to when to reopen.

These and other businesses appear to be heeding the Metrological Agency, which on Friday morning warned Kumamoto citizens to stay out of weak structures until the series of strong aftershocks wanes. There had been 120 aftershocks with an intensity of 1 or stronger by 9 a.m. on Friday.

Chief Cabinet Secretary Yoshihide Suga on Friday morning said the government "will do its utmost to figure out the overall damage, which was not clear during last night."

Suga also said the government is prioritizing emergency-response measures in regard to "life-saving and other rescue activities."

As of 10 a.m., about 44,000 people were taking temporary refuge at 505 venues, the prefectural government said. Many of Kumamoto Castle's kawara -- traditional roof tiles designed to protect a building -- were shaken loose by the earthquake.

Supermarkets sustained damage. Izumi closed two of its nine stores in the prefecture on Friday. The quake brought down ceilings at the two stores. Evacuees wrap themselves in blankets in Mashiki, Kumamoto Prefecture, before dawn on April 15.

Among the Aeon group's stores, Aeon Mall Kumamoto and Aeon Uki suffered. The two stores stopped selling inside but have been offering some items in front of the stores.

The effects of the earthquake is spreading to other prefectures on the southern island of Kyushu. Toyota Motor Kyushu, a wholly owned subsidiary of Toyota Motor, halted production at its Miyata plant, which assembles cars in Fukuoka Prefecture. Company sources said there is no factory damage but a halt in parts deliveries from makers in and around Kumamoto forced the suspension.