With Apple's shift to the high-quality screens, LG could prevail over rival Samsung

SEOUL Apple's plan to equip the next generation of its iPhones with organic light-emitting diode panels presents a potential bonanza for Samsung Display, which controls more than 90% of the global market for OLED mobile phone panels. The unit of South Korea's Samsung Electronics has been supplying these panels, which offer numerous advantages over conventional liquid crystal displays, to Samsung and other smartphone makers since 2010.

Apple's move also represents an opportunity as well as a vindication for LG Display, which has become the world's largest producer of large OLED TVs and has been seeking to enter the market for small OLED panels in a major way. LG Display, the South Korean rival to Samsung Display, knew that Apple, with its emphasis on finding dual suppliers to ensure both production security and cost competitiveness, would be the means to achieve that goal.

The Nikkei Asian Review reported in July that the U.S. smartphone maker plans to use OLED displays for all iPhone models starting in the second half of 2018. 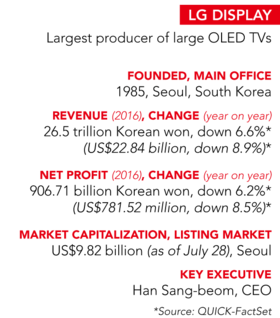 LG Display announced on July 25 that it will nearly double its investment in production of OLED screens for both mobile devices and TVs to 15 trillion won ($13.3 billion) by 2020. This could allow the company to gain an advantage over rival Samsung when it comes to the OLED technology sector. LG Display will soon be able to claim to have a strong position in OLED panels for both the smartphone and TV segments, while Samsung continues to debate whether to enter OLED TV production even as it currently dominates the small OLED display industry.

The company's contribution to its parent LG Electronics and the greater LG Group is considerable. The panel maker in the second quarter ponied up 279.3 billion won in profit to LG Electronics, which owns a 37.9% stake in LG Display. It contributed more than half of LG Electronics' 514.9 billion won net profit for the quarter.

In 2015, it racked up about a fourth of the LG Group's 114.2 trillion won in revenue, according to data from the Korea Fair Trade Commission. The panel maker accounted for an even bigger portion of the group's net profit that year: 30% of 3.2 trillion won.

OLED is emerging as the next battleground in display technology, which until recently has revolved around LCD. OLED displays are thinner and more flexible, allowing smartphone makers to produce devices that are curved and sleek in design. In addition, OLED offers better color contrast and energy efficiency than LCD panels. Because OLED eliminates the need for bulky backlights, TVs as thin as a credit card can be produced.

LG Display would not comment on whether it had secured an agreement with Apple to produce OLED panels for its smartphones. Apple demands strict confidentiality from its suppliers. But analysts said there could be no other explanation for the investment decision and speculated that Apple will provide additional investment capital to LG Display to expand its production facilities. "It makes sense for Apple to cooperate with LG because it cannot accept a situation where it relies exclusively on Samsung for the panels," said an industry observer. LG Display has in the past been a major supplier of LCD panels for Apple iPhones, according to analysts. LG Display CEO Han Sang-beom speaks to reporters in Seoul on July 26. He said, "We are betting all of our resources on OLED." (Photo courtesy of LG Display)

"We decided to mass produce plastic OLED panels because our customers made a commitment at some level," said LG Display CEO Han Sang-beom at a press conference in Seoul on July 26. Plastic OLED panels are flexible ones suitable for smartphones and auto displays, another big potential growth area.

The latest tranche of 7.8 trillion won was committed to OLED production at the company's main facility at Paju, northwest of Seoul and close to the North Korean border. About two-thirds of the investment will be earmarked for small OLED panels, with the rest for OLED TV screens.

Han, a 62-year-old former electronics engineer, has been the driving force behind LG Display's decision to become the first major company to manufacture OLED TV panels. Many saw it as a risky gamble. The production failure rate was initially high due to the complexity of the technology. This resulted in high prices for OLED TVs, which limited consumer appeal despite the superior picture quality. It has only been within the last two years that the failure rate has fallen enough to allow LG OLED TVs to become more affordable.

Samsung has postponed OLED TV production because it concluded that market demand could not justify the investment cost, while analysts say that Samsung's OLED TV production technology is less efficient than that adopted by LG Display. Instead, Samsung has opted for an intermediate technology, known as quantum dot, to produce TV picture quality similar to that of OLED. QD technology and another emerging technology, MicroLED, could be a threat to OLED if they can offer a better picture at a cheaper price.

Han decided to aggressively move toward OLED because profit margins for LCD TVs had become razor thin due to increased competition from Chinese TV makers. OLED TVs could provide fatter earnings once they achieved market acceptance. The technology was also seen as one way to differentiate the LG brand from Samsung in the global TV market.

Nevertheless, LG Display remains the world's largest producer of LCD TV panels, although it does not plan to expand production in this segment. "We are betting all of our resources on OLED. LCD should [be] a backup for it," said Han, who predicted LCD TVs will still account for 65% of the company's total TV panel production by 2020.

"We think the structural transition from LCD to OLED is clear, as shown by its aggressive adoption in smartphones and steady market share gains in premium TV sets," said Chris Chang, an analyst at Nomura, an investment bank. "We expect OLED to contribute about 25% to [LG Display's] revenue by 2019, stemming from LG Display's position as the sole supplier of OLED TVs and No. 2 supplier of mobile OLED panels." 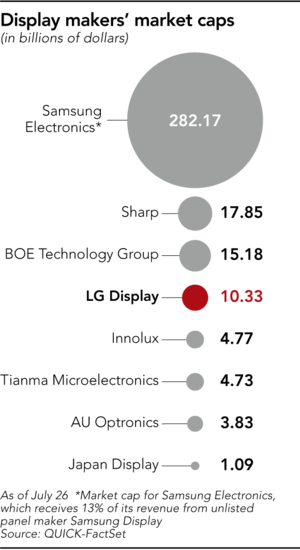 LG Display has been seeking to grow the global OLED TV market by supplying OLED panels to Chinese TV manufacturers, including Skyworth Digital Holdings and Hisense Electric, as well as Panasonic of Japan and Philips brand TVs under TPV Technology of Hong Kong. As part of its latest investment push, it said that it would add OLED production at a reported cost of 2.6 trillion won to its LCD plant in Guangzhou, China, which opened in 2014 with 30% funding provided by a Guangzhou government development agency and Skyworth. Han indicated that LG Display was in talks with other Chinnese partners as well in setting up OLED TV production in China.

The benchmark KOSPI dropped 1.73% to 2,400.99 on July 28 due to a sell-off by foreign investors. The weakening share price also reflects the company's mixed financial performance. 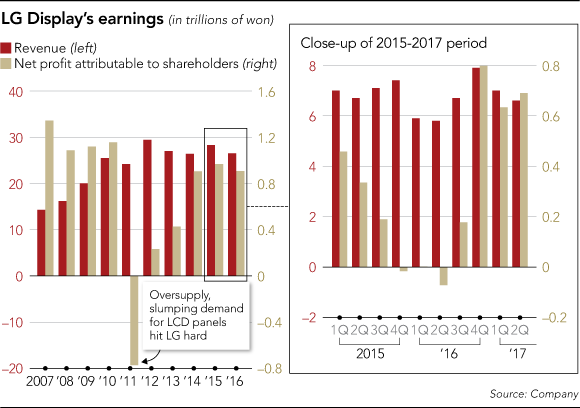 LG Display's earnings in the second quarter fell below market expectations when they were released on July 25. Revenues increased 13% to 6.6 trillion won in the quarter from a year ago, lower than the market consensus of 6.8 trillion won. Although its operating profit rose by an eye-popping 1,712% to 804 billion won during the same period, it fell short of market expectations of 859.3 billion won. Net income rose 8% to 737 billion won. The company has had to face increasing headwinds including a stronger won and slowing global demand for smartphones and large TVs. While LG -- known as Lucky Goldstar until 1995 -- was once considered evenly matched against Samsung in the electronics sector, it has since fallen behind. LG was forced to divest its semiconductor unit as part of a government-led corporate restructuring program in the wake of the 1997 Asian financial crisis, while Samsung was allowed to keep its chip business, which has since become a major cash cow. LG was also late in spotting the potential of smartphones when they first appeared nearly 10 years ago. Although LG's leadership in OLED panels will not narrow the gap much with Samsung, it does represent a validation of its foresight in committing itself to the technology.

The LG Group enjoys one advantage over Samsung, which was caught up in the corruption scandal involving former South Korean President Park Geun-hye and is now under pressure from the government to streamline its operations and make them more transparent.

MODEL FOR REFORM LG is viewed as a model for the corporate reforms that the government wants other conglomerates to emulate. For example, it has adopted a holding company structure for its businesses instead of the cross-shareholding system that binds together other big business groups. Fair Trade Commission Chairman Kim Sang-jo, a fierce critic of the conglomerates, or chaebol, has said that LG has the best corporate governance structure because it is simple to understand and encourages equitable shareholdings.

LG companies are also known for their good work environment. The group, under its founding Koo family, has emphasized the slogan "harmony," in contrast to Samsung's reputation for a cutthroat competition within the company. This comparison is summed up in a saying: "If you want to become an executive, join Samsung. But if you want to be an employee, join LG."

The group is now trying to curry favor with the new administration of Moon, who wants to curb the dominant power of the chaebol and promote workers' rights.