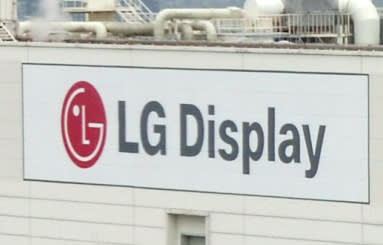 SEOUL -- South Korea's LG Display has raised the stakes in its battle with archrival Samsung Display for a bigger share of the OLED display market.

LG Display has unveiled a plan to sharply expand its capacity to make small and midsize organic light-emitting diode displays, those used on smartphones and smart watches.

The plan is to install a new OLED display production line in a liquid crystal display panel factory in Gumi, Gyeongsangbuk-do. The line will enable the electronics maker to crank out several times more OLED displays than now.

It is LG Display's latest move to strengthen its position in a market that Samsung barely leads.

The company will use a 185-by-150cm resin substrate instead of the usual glass substrate to make more bendable screens.

Use of resin substrates allow for rounded edges and other bold smartphone designs. Resin substrates are also expected to be used more widely for making wearable displays.

Samsung Display has also been ramping up production capacity for small and midsize OLED displays. In March, the Samsung Electronics unit opened a production line for panels made of resin substrates in its plant in Asan, Chungcheongnam-do.

The two leading producers are in a neck-and-neck race to become the top dog in the OLED market.

Demand for small and midsize OLED displays has grown in the past few years, ever since Samsung began using them on its hot-selling smartphones.

Like in production of LCD screens, using glass substrates had been the norm in manufacturing OLED displays.  But this began changing after Samsung used resin substrates for display design innovations like the curved display of its Galaxy S6 edge and some other smartphones.

NH Investment & Securities of South Korea predicts that demand for OLED panels based on resin substrates will grow as smartphone makers try to make their handsets stand out.

Resin substrates this year will account for 15% of the market for small and midsize OLED panels, up from about 3% in 2014, according to NH Investment & Securities.

But demand for these displays mostly remains limited to smartphone makers.

Although Apple, Samsung and LG Electronics have developed smartwatches, the market for these wearables remains limited, and the gadgets require much smaller panels.

In another sector, there is talk about using resin substrate-based OLED panels for automobile interiors, but it will be some time before actual products appear.

LG Display is the world's largest maker of LCD panels; it controls large chunks of the markets for large LCD screens for TVs and small displays for smartphones and other devices. It is effectively the only maker of large OLED screens for TVs. But it has lagged Samsung Display in the market for small and midsize OLED panels.

Samsung also leads LG in the combined market for small and midsize LCD and OLED displays.