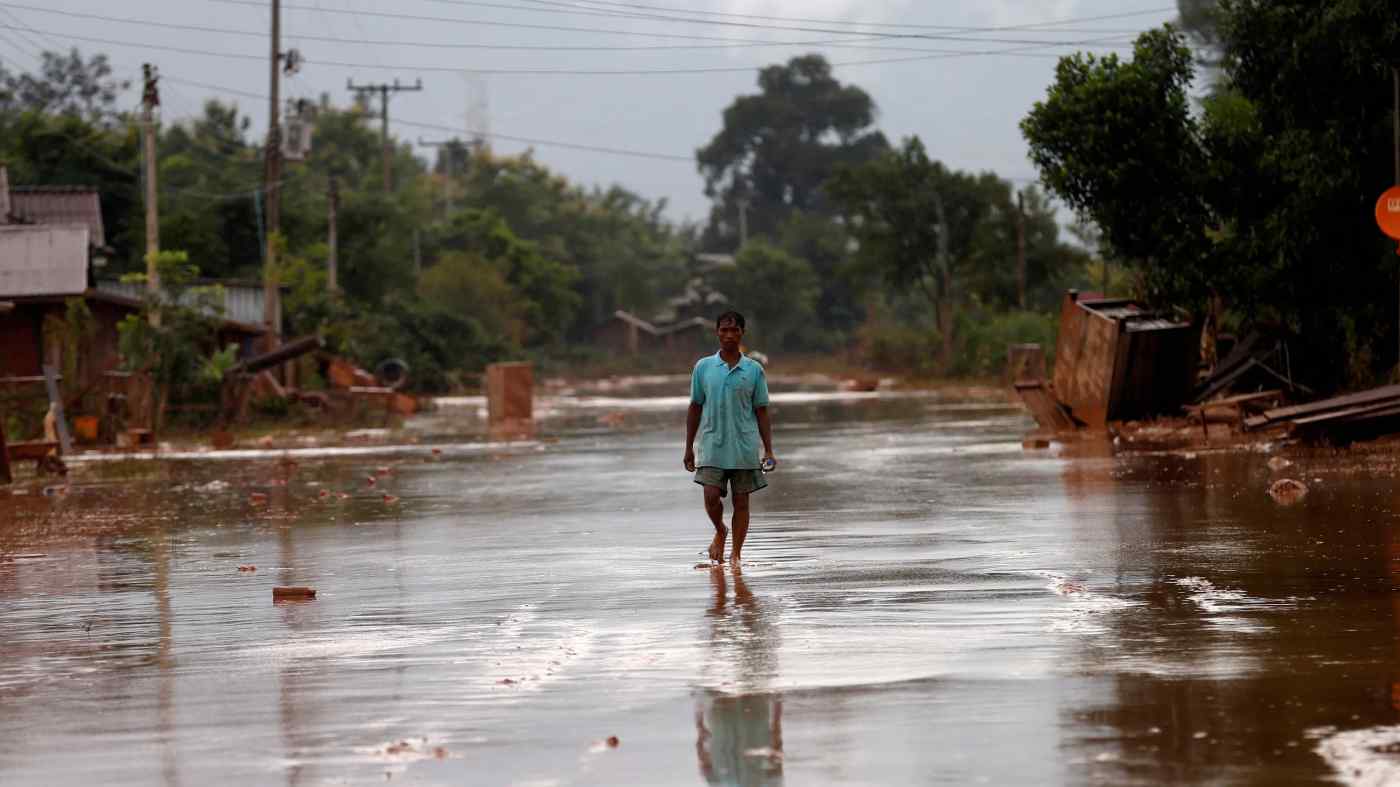 BANGKOK -- The Thai and South Korean investors in the hydropower dam in southern Laos that collapsed last month, killing dozens and washing away the homes of thousands, are coming under increasing pressure to take responsibility for the disaster.

Civil society groups in Bangkok and Seoul issued a joint statement on Thursday urging the companies to stop work on the Xe-Pian Xe-Namnoy hydroelectric project, which was 80% complete at the time of the tragedy.

"The severe impact from the collapse that has been witnessed by the world needs to be admitted and learned from by the investments actors involved," said the statement released by the Laos Dam Investment Monitor the Coordinated Response Team of the Korean Civil Societies for the Xe Pian-Xe Namnoy Dam Collapse.

The call for action followed the Laos government's announcement on Tuesday that it will review safety standards of all planned and constructed dams in the country, suspend new dam investment and reconsider its hydropower export strategy of becoming the "battery of Southeast Asia."

"Without knowing the next step [to be taken] by the Laos government, the [Xe-Pian Xe-Namnoy project] has lost total legitimacy to continue its original function as a hydropower dam," the statement added.

One of the five saddle dams was fractured and broke when water levels rose following heavy rainfall on July 23. Five billion cubic meters of water was released, submerging surrounding villages and causing flooding in neighboring Cambodia, which shares the Mekong River.

The Laos government announced shortly after the incident that substandard construction was the cause, while the companies have not yet confirmed such responsibilities.

SK Engineering & Construction, a subsidiary of SK Holdings, is facing criticism at home from civic groups and the media. Seven activist groups on Thursday launched a joint task force to deal with the disaster and urge South Korean authorities and the company to cooperate with the Laos government in its investigation on the case.

"The investigation should reveal thoroughly whether there were some errors in site selection, design and construction [of the dam] and that the company had conducted environmental and social effect evaluations sincerely," said the task force led by People's Solidarity for Participatory Democracy in a statement.

Kim Soyeun, associate professor at Sogang University's Institute for East Asian Studies, said at a forum organized by LDIM in Bangkok on Thursday that the company may have rushed construction. "It is a very Korean affair that companies cut down on initial planned costs and [adopt] substandard design, or significantly shorten the construction period for greater profit," she said.

Meanwhile, credit rating agencies are strengthening their monitoring of SK Engineering. "The company's competitiveness in the market... can be tarnished, as its reputation on construction and operation management was hurt," said Hong Seok-joon, an analyst at Korea Investors Service.

In Thailand, the pressure is on the government to review its dam investments in neighboring countries and reassess its energy sourcing plans.

"The collapse of the Laos dam gives us an opportunity to review if we really need to purchase electricity from dams in neighboring countries," Witoon Permponsacharoen, director of Mekong Energy Ecology Network, a nongovernment organization that monitors the sustainability of energy projects, said at the forum in Bangkok.

If completed, the Xe-Pian Xe-Namnoy dam plans to supply 90% of its electricity to Electricity Generating Authority of Thailand (EGAT), the state-owned electricity supplier. Ratchaburi, the Thai investor in the dam, is a subsidiary of EGAT.

EGAT has signed similar purchase agreements with at least eight more existing and planned dams in Laos, in most of which it is has invested. The state-owned enterprise is increasingly turning to importing electricity from abroad partly as plans for new power plant projects at home are facing stronger opposition over environmental concerns.

But there is an argument that Thailand is overestimating its electricity needs.

"Authorities say that investing in dams is for Thailand's energy security, to prepare for future economic growth, but we are already oversupplied with electricity," Witoon said. Installed capacity of EGAT was 42,554 megawatts as of May, compared to a peak demand of 29,968 MW.

"We have excess electricity and alternative renewable energies, like solar and wind, are increasing from private power providers," he said. "Then why is EGAT investing aggressively in dams? Its because there is a lot of interest behind them."