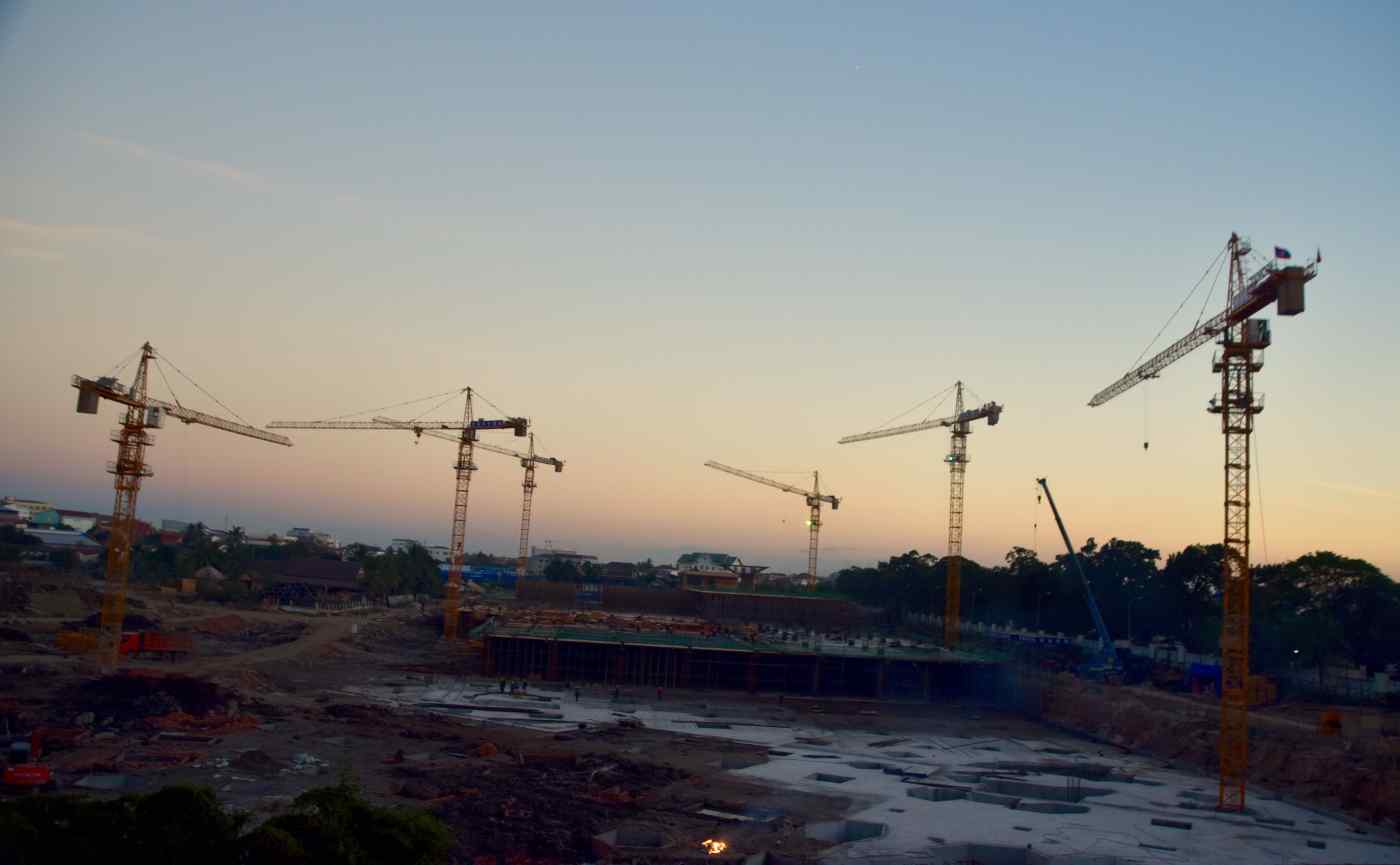 Cranes tower over the construction site for one of about 20 malls going up in Vientiane. (Photo by Simon Roughneen)
SIMON ROUGHNEEN, Asia regional correspondentJanuary 21, 2016 12:00 JST | ASEAN
CopyCopied

VIENTIANE   The capital of Laos is a low-rise, low-key city, especially when compared with the hulking high-rises and bustling streets of better-known Southeast Asian cities such as Bangkok, Kuala Lumpur and Singapore.

But this once-sleepy city is fast shedding its sedate reputation due to a building boom ahead of international summits that will bring U.S. President Barack Obama, Chinese President Xi Jinping and a host of other world leaders to visit in 2016.

Construction cranes tower over the city's two- and three-story shophouses and hotels -- the din of diggers and drills drowning out the capital's increasingly dense traffic.

"So many shopping malls now -- around 20 going up all around the city," said Pouthong Sengchanh while standing over a model of the Vientiane New World project, a mix of shops, restaurants and offices newly stretching along the city's Mekong riverfront. Inevitably, perhaps, Vientiane New World will include a mall of its own as the final stage in the project, scheduled to be completed by 2018.

Sengchanh, a property consultant with Vientiane New World, is not worried about the type of mall overkill that has undermined the character of other Southeast Asian cities. But Vanthana Nolintha, a researcher at the government-linked National Economic Research Institute, said some of the new projects might not prove viable.

"Many new shopping malls have been opened but the majority do not offer high-quality product, hence medium- to high-income locals still prefer to travel across the border for shopping. So, the benefits of allowing many of these new malls are quite questionable," Vanthana told the Nikkei Asian Review.

The construction surge comes on the back of a decade of 7-8% annual economic growth that has seen the Laotian economy double in size since 2006, according to the Asian Development Bank. Laos' gross domestic product is still less than $12 billion, however, making it the smallest economy in the 10-country Association of Southeast Asian Nations.

Much of the growth is driven by mining and hydropower exports. Laos sees itself as what the government calls the "battery of Southeast Asia" and is allowing foreign companies -- Chinese and Thai in particular -- to build massive dams along the Mekong River and its tributaries to supply energy to China and Thailand.

While the dam building has irked neighbors such as Cambodia and Vietnam, which depend on the 4,300km river for agriculture, fishing and tourism, Laos is more concerned about generating employment; only about 25,000 people are employed in the country's mining and dam-building sectors.

The government wants to expand in these areas. Still, attracting labor-intensive investment will not be easy, despite the creation of economic zones offering tax breaks and other incentives to big-name foreign companies such as Japan's Nikon and Toyota, both of which have factories in Laos.

"Laos needs to invest more in improving our human capital, including basic and higher education. Especially, we need to encourage more students to join vocational schools to acquire the skills necessary for industrial work," said Vanthana, adding that labor productivity is low, undermining the cost advantage conferred by low wages.

Around 70-80% of the population depends on agriculture, which also suffers from low productivity, according to a recent World Bank report.

Some of the difficulties of doing business in Laos stem from its lack of maritime access. It is the only landlocked country in Southeast Asia, and the distance to ports in neighboring countries limits trade outside the region. Nearly 80% of its exports go to China, Thailand and Vietnam, which also supply nearly 90% of the country's imports.

But Laos has been trying to turn its location to its advantage, pushing itself as a transit country for land-based trade between its bigger neighbors. Trucks carrying goods from Bangkok to Hanoi, for example, must cross Laos en route.

Laos' strategic location -- not landlocked but "land-linked," to use the government's favored designation -- is the key to the government's ambitions to achieve "middle income" status for the country by 2020.

INTERNATIONAL SPOTLIGHT   The latest blueprint for achieving this goal was discussed in the country's national assembly on Dec. 25 by Planning Minister Somdy Duangdy, who said that achieving badly needed growth of 7.5% per year over the next five years would require significant investment in mining and dams.

Laos will be in the international spotlight this year as chair of ASEAN and host of various international summits, culminating in the East Asia Summit in late 2016, when leaders from Australia, China, India, Japan, South Korea, New Zealand, Russia, the U.S. and the nine other ASEAN members will visit.

However, the ruling Lao People's Revolutionary Party is unlikely to face much international scrutiny of its growth policies. ASEAN members, in particular, are reluctant to comment on the internal affairs of individual members, while domestically, the communist LPRP is the sole legal party under the country's constitution, and dominates decision-making. Nongovernmental organizations and media outlets, most of which are state-run, refused to speak on the record about political rights when contacted by the NAR.

Laotian government officials regularly cite "political stability" as one of the country's assets when pitching to would-be investors. Laos, proclaims the Ministry of Planning and Investment's Investment Promotion Department website, is "one of the most Politically Stable Country in the Region."

China, Thailand and Vietnam, all run by authoritarian governments, make up the bulk of investment in Laos, with cash from mining and hydropower funding Vientiane's property boom. Northern Laos has also seen an influx of Chinese businesses and settlers in recent years, dotting the countryside with big farm projects and gaudy casinos.

Chinese investors are also prominent in the capital. Vientiane New World is being built by China CAMC Engineering, while Chinese and other foreign investors are making their presence felt in Vientiane's thriving real estate market. Prices can range from $2,000 per square meter in the city center to $50 on the outskirts, according to William Hancock of Laos First & Associates, a property consultancy.

"Laotians make up only about 40% of my clients," said Nakadej Invihan of Saiawardz Real Estate. "The rest are foreign, maybe 20% Chinese, 10% Korean, Vietnamese, Westerners," he said. "Land prices in Vientiane have gone up maybe 30-50% in the last two to three years, and I think it will continue like that."

Even so, outside Vientiane and Luang Prabang, a popular tourist destination in northern Laos, there is scant sign of any boom. In Pakse, a key market town in southern Laos, drivers of the ubiquitous three-wheeled tuk-tuk taxis head home at 8 p.m. most evenings, leaving the tranquil streets empty aside from a handful of backpackers.

"People come for a night, then head to the countryside for hiking," said a travel agent who gave his name only as Tec.

But with property prices low outside Vientiane and the Laotian economy set to maintain strong growth, realtors are starting to look outside the increasingly clogged capital. "Other cities and towns are a lot cheaper, and very interesting to invest in because prices are rising fast," noted Hancock.