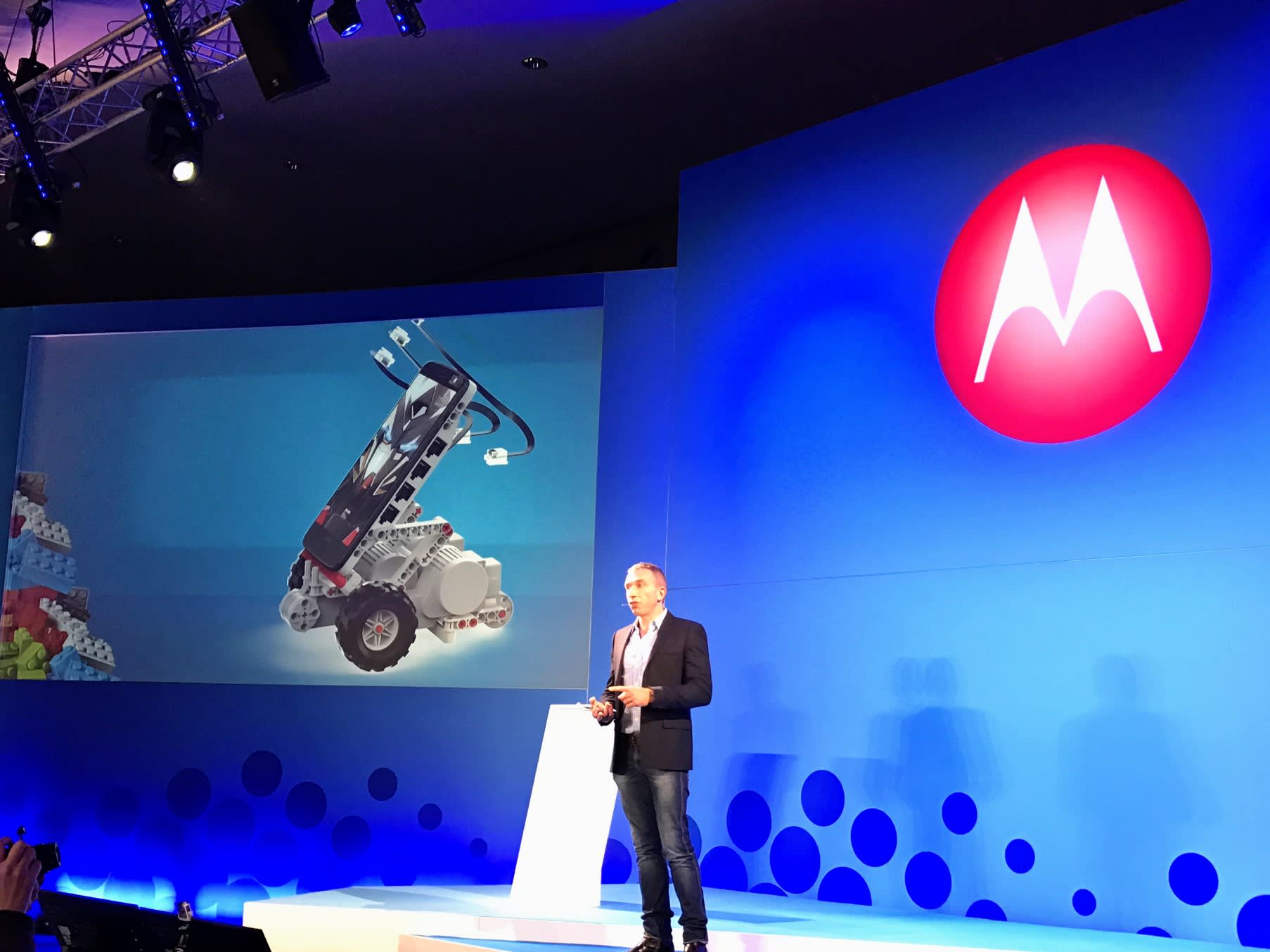 PALO ALTO,U.S. -- As smartphone sales begin to plateau worldwide, Lenovo Group is betting on innovation to invigorate the market and secure its own place in it.

Its Motorola Moto Z smartphone, which debuted in 2016, is based on modular technology that lets users enhance and expand their phone's core functions. High-performance cameras, additional batteries, mobile projectors and more powerful speakers can be easily added via a dedicated, modular interface. This represents a radical departure in smartphone design.

The modular approach also addresses regional differences as regards demand for added functionality. For example, backup batteries are popular in the U.S., while cameras and speakers are favored in Japan and Australia, respectively.

The new smartphone, developed by group company Motorola Mobility, targets users in advanced economies, which are dominated by Apple and Samsung Electronics at the high end. As chairman Aymar de Lencquesaing commented at a February smartphone trade fair in Spain, Motorola Mobility will lead technological innovations amid the stagnating smartphone industry.

Since the launch of Apple's iPhone in 2008, the market for smartphones and tablets has become saturated and competition fierce. Manufacturers vying for market share have been releasing new models on increasingly short development cycles, forcing them to tout technological innovations that sometimes seem more gimmicky than innovative. This in turn has caused users to hold onto their phones longer as they wait for "real" upgrades.

Sensing these trends, Google kicked off its Ara project in 2013, expecting to revolutionize the smartphone industry with a modular approach. The project called for memory, speaker, storage, camera and other components to be stacked on top of each other. Users could configure their phones according to their own needs. Google also hoped the idea would catch on with other companies, and disclosed specifications to encourage development of different components.

It was an ambitious attempt to dismantle the iPhone-based industry model, but it didn't quite gain traction. With no profitability in sight, Google pulled the plug on the project.

Lenovo picked up where Google left off and hopes the modular approach will eventually take off. The company aims to compete with the likes of Apple, Samsung and other manufacturers in advanced markets, which Motorola Moto Z is targeting. And there is definitely room at the top, as Samsung took a hit last year after a spate of fires involving a key model.

Lenovo has the second largest smartphone market share in some regions and may surpass LG Electronics in countries other than China.

But Lenovo is worried that growing competition from local manufacturers in India -- as well as from Chinese companies -- could result in a declining emerging market share. The company is already losing ground in China to Huawei Technologies and is facing fierce competition from newcomers Oppo and Vivo. Hence, their goal of becoming a bigger player in advanced markets is of significant importance.

From smartphones to robots

To make the Moto Z attractive to consumers, Motorola hopes to develop more modules. These include a photo printer, a back cover with display functions that employ light-emitting diodes, and a slot capable of storing multiple subscriber identity modules, or SIM cards.

There are also plans to develop devices that incorporate the Moto Z, such as robotic toys and tablets. Based on this concept, the company is also considering printers and other hardware products that would make use of smartphones.

James Thiede, senior director at Motorola, stated that commercial applications of these devices may be available in the very near future, though there are no official launch dates.

Motorola's modular project ultimately aims to reduce costs of certain devices by replacing their core components with a smartphone. It is an ambitious undertaking, but not without risks, one of which is squandering development resources.

But other companies are following suit, among them Samsung and Google, which are developing their own devices that use smartphones as a key component, such as virtual reality terminals.

As the market for smartphones wanes, manufacturers will have to decide what technologies to pursue. Likely growth areas can be found in augmented reality and the internet of things.

But until then, it seems there will be attempts to squeeze as much functionality out of the ubiquitous smartphone as the Motorola Mobile is trying to do.