Lippo's James Riady looks to leave rocky past behind

JAKARTA -- Ask aides to Lippo Group CEO James Riady about his management style, and they will tell you he is a "visionary." They may then pause for a moment before whispering that he is also "very hands-on" and "aggressive." 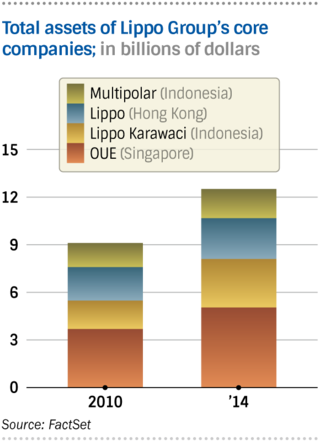 Indeed, when the Indonesian conglomerate's tie-up talks with Japanese trading house Mitsubishi Corp. went nowhere for nearly a year, Riady flew to Tokyo in April and negotiated the deal himself.

In late October, a subsidiary of Lippo Karawaci -- the group's core property company -- and Mitsubishi announced that they will develop luxury condominiums in Lippo's new 322-hectare township on the eastern outskirts of Jakarta. Little more than an open field at the moment, Riady envisions the place becoming a community of more than 70,000 residents.

"Lippo Group and Mitsubishi will cooperate in various projects in the country and abroad," Riady told reporters. He added that within three years, the group will invest up to $500 million in projects with its Japanese partner.

Riady, 58, is the son of group founder and Chairman Mochtar Riady, who made a name for himself as a banker in the 1970s. The younger Riady is spearheading the group's efforts to capitalize on Indonesia's expanding middle class. In addition to launching a series of property projects, Lippo has forayed into new businesses, using brand names that seem to reflect its go-getting attitude: Bolt!, a mobile data communications service, Cinemaxx, a cinema complex, and Maxx Coffee, a cafe chain.

Drawing on the group's experience doing business abroad, James Riady is working to bring in premier foreign investors. But Lippo's overseas endeavors -- and James Riady's involvement in them -- have been a source of controversy and rancor over the years.

As he takes on more responsibility for the empire his father built, the CEO faces the challenge of managing diverse partnerships without stepping on the wrong toes.

James Riady was at the center of the biggest scandal in Lippo's history. In 2001, he and the group were fined $8.6 million for violating campaign financing rules in the U.S., including during the 1992 presidential election won by Bill Clinton.

After attending university in Australia, he became an intern at a U.S. investment bank in the late 1970s. He briefly moved back to Indonesia to help out with his father's business, but later returned to the U.S., this time with a senior management position. By then, Lippo had bought a stake in a bank in the state of Arkansas.

Lippo's foray into the U.S. -- rare for an Indonesian company at the time -- was driven by Mochtar Riady's desire to secure foreign capital and human resources. James Riady made connections with powerful business leaders and politicians; along the way, he forged close ties with Clinton, then the governor of Arkansas. That relationship would come back to haunt him.

Authorities went after him for deploying foreign corporate funds to support Clinton's run for president. The fine was the largest ever levied for U.S. campaign finance violations. The scandal received wide coverage in the American media, partly because of the Riady family's close ties to Chinese businesses.

Mochtar Riady was forced to review his plans for U.S. expansion. His son, who had been positioned to lead that drive, was barred from traveling stateside until 2009, according to media reports. Lippo pulled out of the U.S. banking business.

"What I learned is that money and power are both a blessing and a curse," James Riady said in a 2009 interview with the Wharton School of the University of Pennsylvania.

Despite the painful experience, James Riady's fondness for the U.S. has not faded. A devout Christian, he co-founded a university in Indonesia that offers a selection of English-only courses. He has been grooming his son John Riady, who was born and educated in the U.S., for an international business career. The new township project on the Jakarta outskirts is named after California's Orange County.

James Riady, as it turned out, returned to Indonesia in time to guide Lippo Group through a dark economic period.

Indonesia was hit hard by the Asian financial crisis of 1997 and 1998. Political turmoil and a plunge in the value of the rupiah sent foreign businesses racing for the exits. In the hope of bringing them back, the government named James Riady a "business ambassador."

At Lippo, he was put in charge of managing domestic operations, while his younger brother, Stephen Riady, handled overseas pursuits.

Lippo thrived as the Indonesian economy bounced back. The group's banking operations were scaled down but its early bets in the property sector began to pay off. Lippo Village, the group's flagship development on the western outskirts of Jakarta, flourished, with malls, hotels and golf courses. An executive at one of Lippo's group companies called James Riady "an expert at negotiating land prices" -- a crucial skill in a country where disputes over land ownership frequently delay projects.

In the health care business, the CEO managed to add 17 hospitals in four years.

Using the group's global connections, James Riady has courted foreign investors and promoted diversification. In 2010, Lippo sold a stake in its department store operator to Luxembourg-based private equity company CVC Capital Partners. Shares in Lippo's supermarket operator were sold to Singaporean state investment fund Temasek Holdings in 2013. Both companies saw their bottom lines rise in 2014, when many retailers were struggling to cope with sluggish economic growth.

CT Corp, a rising conglomerate owned by Indonesian tycoon Chairul Tanjung, increased its stake in Carrefour's Indonesian unit in late 2012 and bought a stake in a pay-TV company six months later. Sinar Mas, which has a strong presence in the agriculture sector, partnered with Japan's Aeon Mall and opened a shopping center in a township it is developing.

In a recent interview, Mochtar Riady emphasized his intention to concentrate on Indonesia's economic development for the foreseeable future.

Nevertheless, James Riady looks likely to keep at least one foot in the global market. In June, he was in Myanmar opening a hospital under a joint venture with local conglomerate Serge Pun & Associates Group. Lippo plans to roll out 20 hospitals there over the next decade.

One factor to watch is whether Lippo can stay on good terms with its partners. In the mid-2000s, the group teamed up with Astro Malaysia Holdings, a media company partly owned by Malaysian tycoon Ananda Krishnan's privately held company. Together, they planned to launch a pay-TV service in Indonesia, but the venture quickly turned sour and was discontinued within a few years. A string of international lawsuits followed.

In 2013, Lippo jumped back into pay-TV with Japanese trading house Mitsui & Co. But its newest partner, Mitsubishi, and Mitsui are fierce rivals.

James Riady has said that cooperation with Mitsubishi may extend into services and finance -- fields where Lippo already works with Mitsui. The CEO's ability to juggle these partnerships at home could make or break Lippo's international fortunes.