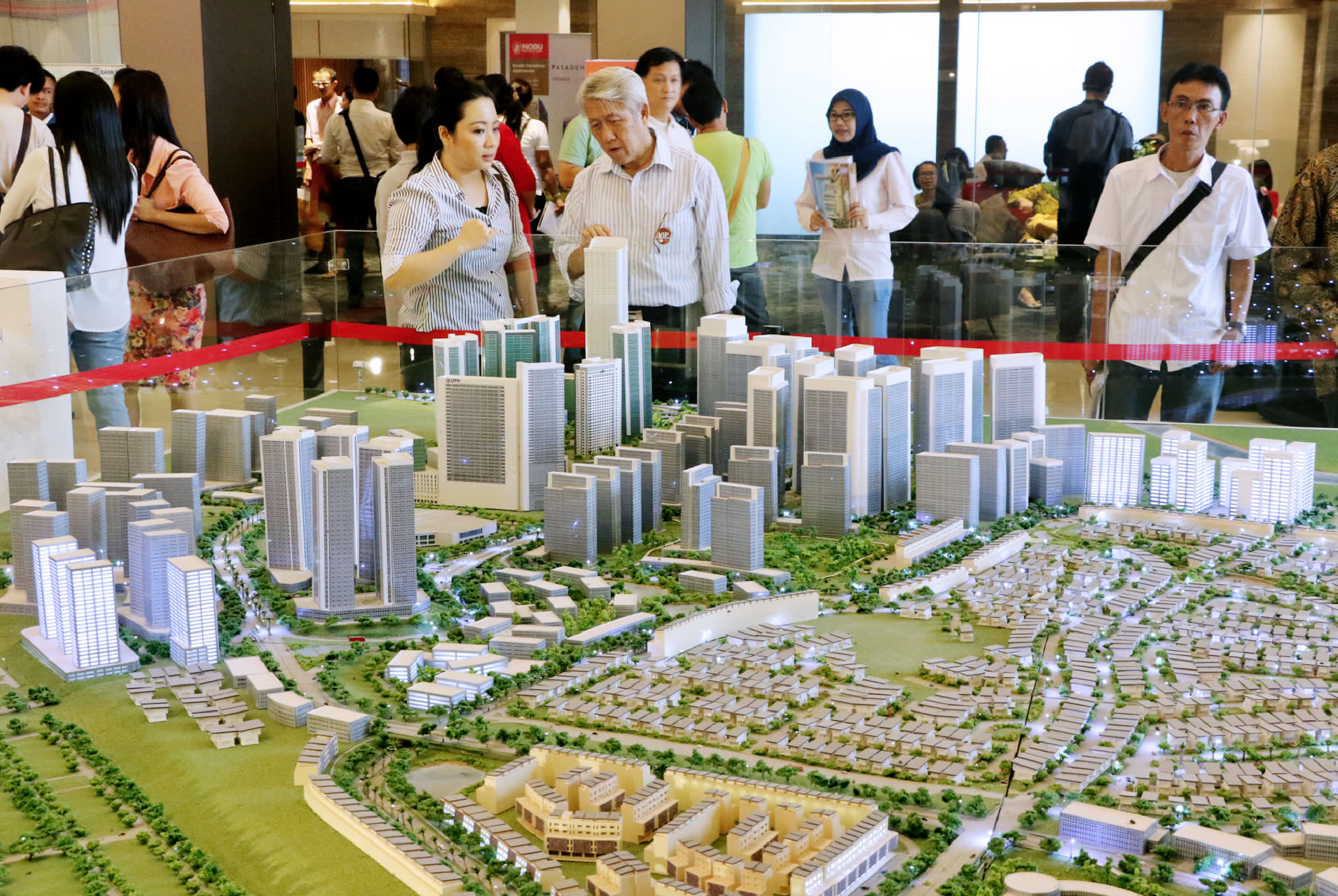 JAKARTA -- Major Indonesian conglomerate Lippo Group is developing a new town in a suburb of Jakarta, focused squarely on the country's emerging middle class. When complete, the town will have 12 tower condominiums, office buildings, schools and a hospital, among other facilities, with the population expected to reach 70,000. The group hopes to attract to the town not just foreign businesspeople sent by their companies but members of the emerging Indonesian middle class as well. The huge new town is also expected to help improve the living conditions in Jakarta, a city known for the worst traffic congestion in Asia.

The town, dubbed Orange County, is being built in the Bekasi area about 40km east of the central part of Jakarta. On the 322-hectare site, a shopping mall and a few other facilities have already begun operating, but most of the area still remains vacant.

The shopping mall hosted a drawing for units in a high-rise condo on March 7. The winning numbers were shown on a big screen and staff on a platform read them out, as successful buyers in the crowd howled with joy. The drawing attracted more than 1,000 applicants for about 580 units offered. The price of the condo -- about 600 million rupiah ($45,470) for a 40-sq.-meter unit -- is less than a third of what a comparable condo in Jakarta would cost, according to a local real estate broker.

In addition to the 12 tower condos with some 6,000 units in total, Orange County will also have low-rise condos and detached houses, as well as office buildings, an international school, a hospital and a variety of commercial complexes. In April, a kindergarten primarily for Japanese children will open. The first phase of the ambitious 250 trillion rupiah project will be finished as early as 2018.

Lippo Karawaci, the real estate developer at the heart of Lippo Group, builds the condos and, to capitalize on condo residents' consumption and demand for services, also plans a shopping mall, a hospital and other facilities. The actual development work of Orange County is conducted by Lippo Cikarang, a subsidiary of Lippo Karawaci.

Lippo Cikarang President Meow Chong Loh said that the Orange County area will be a new driver of the Indonesian economy, with the new town grouping together various races of people and showing a great presence by bolstering economic growth. Winners of the lottery fill out contracts in the town on March 7. (Photo by Keiichiro Asahara)

Orange County is initially targeting expats working in the Indonesian plants of foreign companies in an industrial park adjacent to the town. The park is home to more than 1,000 plants of mostly foreign manufacturers including Japanese companies such as Toyota Motor, Honda Motor, South Korea's Hankook Tire, and Danone of France.

As the Indonesian government plans to reinforce infrastructure for the industrial park by building an airport, a seaport and the like, more manufacturers and other companies are likely to set up factories there. The new town will provide the park's workers with a convenient and comfortable lifestyle, allowing them to avoid the infamous traffic jams of central Jakarta.

Foreign workers alone would not be enough to populate the town, however. The new town's real target is Indonesian middle-class people.

The country's population totals more than 250 million, and the average age is 29, so housing demand is expected to grow in the years to come. Prices of condos in central Jakarta are climbing and properties are in short supply. Condos in Orange County will likely enjoy strong demand if they are offered at reasonable prices, especially once their brand value gets a boost by having foreign businesspeople as tenants.

The Indonesian real estate market had temporarily declined partly because the market was awaiting the results of the presidential election last year, but it is again trending upward. In Orange County, 1,000 or so condo units have already been sold through gradual offerings, though a Lippo sales staff said, "We have raised the prices by 3-5% each time we put new condo units on sale."

Lippo plans to build more towns modeled on Orange County in other parts of Indonesia, taking aim at the swelling middle class. The group appears set to enhance its strategy of developing new towns that are able to fully benefit from the subsequent clothing, food and housing demand from the people who move there.