TOKYO -- A Japan-based startup that wants to use minisatellites to create artificial shooting stars will perform its first show in 2020, but it is already anticipating demand from companies in China, the Middle East and the U.S. for its unique brand of entertainment.

"We have resources in space, so of course we hope to expand our business to overseas markets," Lena Okajima, founder and CEO of ALE, said at a news conference here on Wednesday.

A company in Macau, a casino hub curious about new types of entertainment, has expressed interest in ALE's shows, Okajima said after the news conference. Middle Eastern cities like Dubai are also interested.

"They want to see how we manage the first show in the spring of 2020," she said.

ALE's satellites are designed to spray small metallic balls about 1 cm in diameter outside the atmosphere. As they re-enter the atmosphere, the balls burn brightly 60 km to 80 km above the ground like natural shooting stars. One satellite can carry about 400 balls, and 20 would be used in a typical event.

ALE's technology lets it control the satellites, the direction of the balls, and the color and brightness of the shooting stars. Founded in 2011, the startup's investors include a venture fund associated with the Tokyo University of Science. 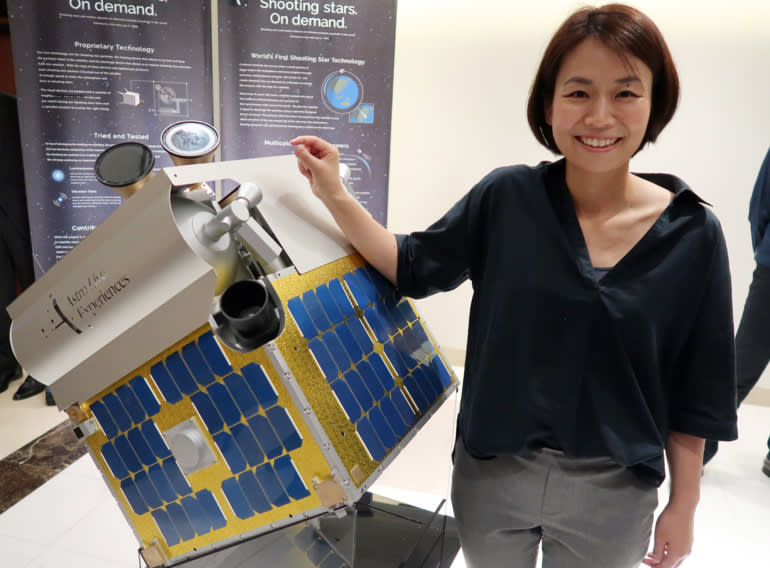 Lena Okajima, founder and CEO of ALE, introduced a model of the startup's satellite at news conference held in Tokyo on July 18.(Photo by Akihide Anzai)

Okajima chose Japan's Hiroshima and Setouchi area as the venue for the first show, considering factors like weather conditions, scenery. She also wants to help lift the spirits of local communities ravaged by recent floods.

Japan Airlines and convenience store chain FamilyMart will sponsor the show and put out their own products and viewing events.

ALE will launch two satellites before the Japanese show. If successful, ALE will step up its overseas marketing. "We also hope to join big events such as the Olympic Games and the World Cup," Okajima said.

As an astronomy student at the University of Tokyo, she watched a Leonid meteor shower in 2001 and mused with her classmates about making artificial shooting stars someday.

After earning her doctoral degree, Okajima joined Goldman Sachs. She established two startups other than ALE after leaving the Wall Street bank.

"We would like to contribute to the development of technology and the space industry through entertainment and science," Okajima said.